The latest Hampton-Alexander review reveals that women have reached a major milestone on FTSE 100 boards, but still fail to win CEO or chair positions in significant numbers. 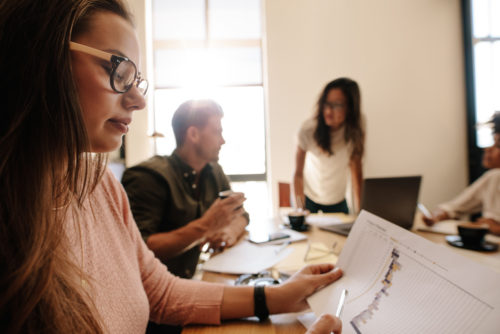 That’s the conclusion of the third Hampton-Alexander review looking at the progress of women in the boardroom.

One woman said she watched “mediocre guys coast to high-ranking positions based on likeability.”

The report celebrated the fact that in the FTSE 100 the proportion of women on boards has reached 30.2%, the first time the number has passed the 30% mark. That’s a significant rise from last year’s static figure of 27.7%.

In the FTSE 350 there are 22 female chairs compared with 17 last year, while the index actually saw the number of female CEOs fall from 15 to 12.

According to Sir Philip Hampton, chair of the review, the poor showing for CEOs and chairs comes “despite an ever-increasing pool of women with substantial board experience”. He adds: “A sharper focus is needed to understand what is happening in the appointment process for these really top jobs.”

Sir Philip’s review provides some clues. “Early insights”, he says, suggest that inexperienced senior independent directors (SIDs) may play it safe when recruiting chairs; job descriptions could be too narrow or written to benefit an existing board member; boards may worry that investors will complain that women are not perceived as having “City” experience; the interview process may not provide a level playing field; and lastly, search firms may suffer from bias, or stereotyping, when constructing shortlists.

One problem may also be that “everyday sexism” still has a grip on some influential figures. The review helpfully provides some anecdotes from women in the workplace. One woman said she watched “mediocre guys coast to high-ranking positions based on likeability.” Another complained she showed up to deliver a report for visitors who “asked me for coffee, white no sugar”.

“Women, we know, often fail to take on, or to be promoted to stretch jobs because they have an unwarranted lack of confidence…”

Others see alternative reasons. According to Fiona Hathorn, managing director of Women on Boards, a network for female executives, access to “stretch” jobs for women may come down to a lack of investment in leadership, or the fact that women tend to be collaborative and therefore come across as “managers” rather than leaders when interviewed. C-suite collaboration is also markedly different to cooperation in other parts of an organisation; as a result many male-dominated boards resist entry to women. Then there are simple, but significant, confidence issues.

“Women, we know, often fail to take on, or to be promoted to stretch jobs because they have an unwarranted lack of confidence and … they frequently have less information about what a senior role entails than others,” says Hathorn. “This means that when they are interviewed, they lack the leadership language to win promotion, even when their actual skills and capabilities make them the best candidate for the job.”

Progress will require better preparation for the top jobs, plus a “step change” in the way recruitment takes place to board positions, including open advertising for vacancies, instead of the traditional methods used by search firms.

Other figures produced for the review may give rise to some optimism. For instance, there are now more female non-executives around in the FTSE 350: 757 this year compared with 684 last year, and 244 in 2011. That could suggest that the non-exec/independent director pipeline is improving. Improvement was also seen in the FTSE 100 where 36.5% of non-exec roles are now occupied by women, against 33.3% last year and 15.6% in 2011.

Sir Philip also remarks that on the wider figures, the FTSE 100 is on course to meet its 33% target for women on boards by 2020. It is possible that the current generation of executive directors will, in turn, become a new wave of non-execs and, potentially, chairs.

“We’re certainly now seeing more women coming through to senior levels and progressing to board level.”

According to Kieran Moynihan, an adviser on board performance, senior independent directors will need to change the way they run the selection of chairs to ensure the process is “genuinely unbiased”. He also believes institutional investors will need to do more to push for change. Many investors, says Moynihan, echoing thoughts elsewhere, are preoccupied with appointing a “safe pair of hands”.

“As long as institutional investors leave it very much to the SID and existing board to appoint a board chair successor, you will invariably have a self-fulfilling prophesy where the existing board will, the vast majority of the time, gravitate to the comfort zone of a male board chair,” he says.

Release of the review coincided with the publication of figures from Odgers Berndtson, an international headhunting firm, also offering reason for optimism that things are changing in the search process. The firm said that for the second year running, 50% of the FTSE 350 placements it undertook led to a women being appointed.

“We’re certainly now seeing more women coming through to senior levels and progressing to board level,” says Susanne Thorning-Lund, a partner in the non-exec and chair practice at Odgers.

Thorning-Lund lauded a switch in attention at the review to focus on the management level just below the board as an area where gender diversity needs to be improved.

This year gender diversity received a boost from a revised UK Corporate Governance Code which also included measures to improve the number of women in leadership.

The Financial Reporting Council (FRC), guardians of the UK code, wants “momentum to be maintained” towards more women on boards. Tracey Vegro, the FRC’s executive director for strategy and resources, says: “In the year when we remember 100 years of women’s suffrage, there is much to celebrate about gender diversity, but we must all now rise to the challenge of embedding diversity.”