One of the Kingman review’s key recommendations for reforming audit was a version of US Sarbox rules, a proposal supported by many audit committee chairs. 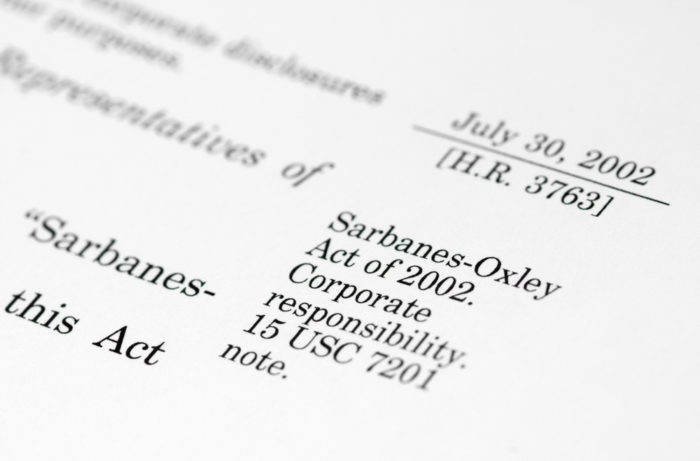 In 2002, in the wake of the Enron and WorldCom scandals, US lawmakers introduced stringent rules handing chief executives and finance directors legal responsibility for internal controls and better reporting.

Following the UK’s general election last week, speculation is now rife that Britain is about to take a similar course.

Last year and the year before, the UK agonised over audit, auditors and audit regulation. This week newspapers, notably The Sunday Times and City AM, report that the Financial Reporting Council (FRC) is working on a version of the Sarbanes-Oxley Act (Sarbox) to be introduced by the new government.

This should not take us by surprise. A version of Sarbox, or at least reviewing the possibility of introducing such a law, figured among the key recommendations for reforming audit and governance regulation published in December 2018 by Sir John Kingman. Nor should it be an enormous surprise that that the FRC is working on draft rules. The FRC has been quietly working on transforming itself in the background despite politicians being hugely distracted by Brexit.

For their part, the FRC will only confirm that Sir John recommended a new internal controls regime and that the Department for Business, Energy and Industrial Strategy (BEIS) was broadly in support of the Kingman report.

However, it would be a surprise if the FRC is pushing ahead with proposed law without preparing for detailed consultation first.

Sir John said BEIS should “give serious consideration to the case for a strengthened framework around internal controls in the UK”. Lessons, Sir John added, should be learned from the operation of Sarbox, the pros and cons analysed and then presented for consultation.

Many UK companies are familiar with Sarbox as a result of running US operations that fall under its ambit. Sir John found himself surprised by the support he found for a Sarbox-style regime.

Sarbox imposes requirements for chief executives and chief financial officers to report annually on the effectiveness of a company’s internal controls over financial reporting. Auditors must also “attest to, and report on, management’s assessment of its internal controls”.

At the time, Sarbox was viewed as a major upheaval with implications far and wide, after lawmakers said it should be applied even to foreign-owned US-listed companies.

Sir John wrote that his review members were “particularly struck” by the support for Sarbox-like rules among audit committee chairs.

“The arrangement is seen as having led to better financial reporting, fewer significant accounting restatements and stronger reassurances for audit committee members about the robustness of internal controls.”

His report added: “The provisions also underline clearly that the primary responsibility for internal financial controls and the accuracy of financial reporting rests with the board and management of a company.”

While Sir John was keen on looking at the possibility of Sarbox rules he also conceded problems. It would be a “very major step” with “significant costs” at the beginning, particularly for smaller listed companies which, in the US experience, are “affected disproportionately”. Listing, Sir John said, could become less attractive as a result. And this at a time when many observers are concerned about the number of companies coming to market.

Earlier this year, Tom Kloet, chair of the audit committee at Nasdaq, told the Chartered Governance Institute in an interview that Sarbox “overall” has had “material benefits”. Though many of the reasons are due to factors already in place in the UK: it guaranteed independent directors on audit committees and the creation of a new audit regulator (the Public Company Accounting Oversight Board). But he also said compliance had become more expensive and that had possibly affected the decision of some companies to go public.

Both the Kingman Review and a review by the Competition and Markets Authority have made extensive recommendations for reform of audit. Another review looking at the contents of audits, led by Sir Donald Brydon, is due to report on 13 January.

Sir John publicly complained earlier this year that government had done nothing to introduce the powers necessary for a reformed audit and financial reporting regulator.

Now that a general election is out of the way and the country’s Brexit destiny more or less resolved, political attention may turn back to more mundane issues. Audit and financial reporting are on the agenda and boards should be prepared for the possibility of significant change.