A revision of the UK’s Corporate Governance Code is out for consultation. Will it bring a halt to corporate scandal, and does it promise a bigger, broader objective? 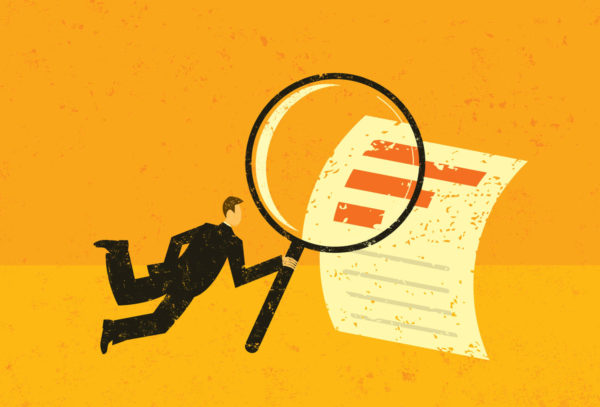 Just when it might seem that corporate governance debacles were receding into the past, along come two more as reminders that confidence in business can be fragile. Events at Persimmon (over the chief executive’s £100m bonus), and Carillion (the collapsed construction company that entered liquidation with £1.7bn of debt), have once again placed governance on the front page and at the centre of public debate.

Coincidentally, those events come at precisely the same time as regulators are seeking to revise and strengthen the UK Corporate Governance Code. A new version is out for consultation. It introduces statements on company purpose, corporate culture, executive pay, the responsibilities of remuneration committees, diversity and the role of wider stakeholders, especially employees.

The question is: will it address the concerns that have emerged about UK business and its management?

When the draft new code was released at the beginning of December by the Financial Reporting Council (FRC) many of its themes had been well trailed, but the document still offered corporate governance aficionados more than enough to chew over.

The code stressed the need for boards to consider their “contribution to wider society” and placed new responsibilities on directors to manage company culture. Boards were asked to consult with employees (and given a choice of how to do it) and handed responsibility for widening diversity concerns from gender, to include ethnicity and social class.

In addition, boards were asked to consider diversity not only in the boardroom, but also in the management pipeline. 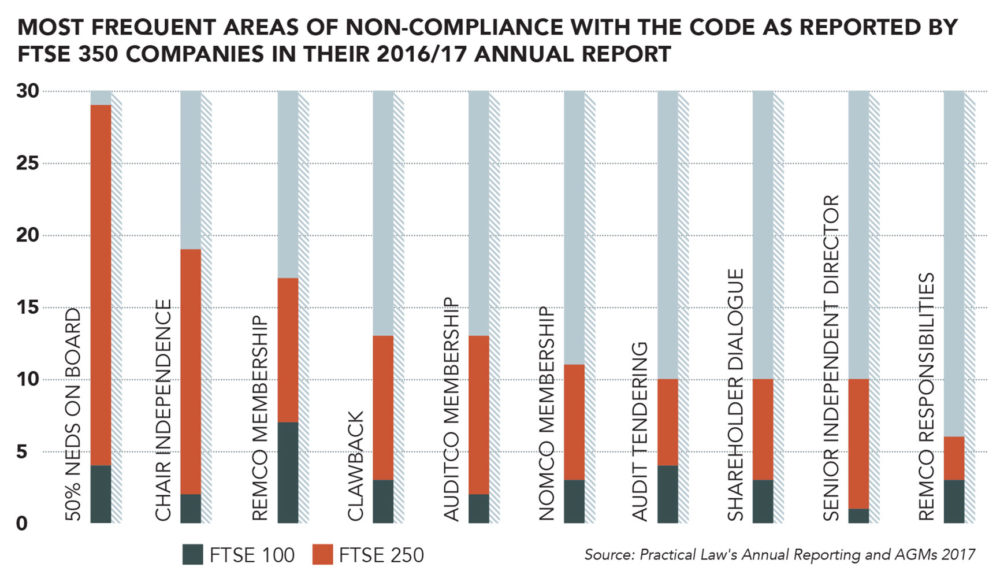 The code challenged remuneration committees to extend their responsibility from boardroom rewards to the pay of the wider workforce, and how pay and policies harmonise with company strategy. A new provision specifically aims to encourage boards to withhold pay from underperforming managers on a discretionary basis.

Sir Win Bischoff, chairman of the FRC, placed the new-look document in the context of Brexit, saying a “revised code will be essential to restoring trust in business, attracting investment and ensuring the long-term success of companies for members and wider society.”

“Engaging with and contributing to wider society must not be seen as a tick-box exercise but imperative to building confidence among stakeholders and in turn the long-term success of a company.”

Business minister Margot James stressed the importance of workers in the code. “Firms that are alive to the concerns of their workers and shareholders see the benefits on their bottom line and the FRC’s proposals will ensure our largest companies benefit more from the experience of their workforce, suppliers and customers.”

Of course a revision of the code has been brewing for some time but the work was given fresh impetus when Theresa May began her campaign to become Conservative Party leader and prime minister.

In a speech in July 2016, she declared her mission was to confront social inequality and linked governance directly to her goals. She said she would aim for a “Britain that works for everyone,” and declared that she would reform the economy for “greater shared prosperity”. It was in this context she said she would seek a “change in the way big business was governed”.

“The people who run big businesses are supposed to be accountable to outsiders, to non-executives, who are supposed to ask the difficult questions, think about the long term and defend the interests of shareholders,” said May.

She continued: “In practice they are drawn from the same, narrow social and professional circles as the executive team and—as we have seen time and time again—the scrutiny they provide is just not good enough.” She added: “We’re going to have not just consumers represented on company boards, but employees as well.”

If any issue seemed like it was at the heart of social equality, or at least one that had led to outraged headlines in the press, it was the subject of executive pay.

“We need to have a radical rethink of what remcos are for. I don’t think they are functioning well enough, and I think it’s a systemic problem.”

There has been considerable pressure in the UK regarding remuneration. A new public register managed by the Investment Association details significant shareholder votes against pay deals, but the bonus for Persimmon CEO Jeff Fairburn, which triggered the resignation of both the company’s chairman and remuneration committee chairman, brought the issue crashing back into the public eye.

Many saw the expansion of the remuneration committee role as an overdue measure. Stefan Stern, director of the High Pay Commission, describes the code changes as “welcome and necessary” and the FRC’s intentions as “very good”.

Of course, what the code does, if the new measures are fully adopted, is take the work of the remuneration committee into a whole new area. For Stern this is overdue, and remcos [remuneration committees] have a much greater role to play. He adds: “We need to have a radical rethink of what remcos are for. I don’t think they are functioning well enough, and I think it’s a systemic problem.”

Stern sees workers on boards being connected to the pay question. The code now recommends that boards “establish a method for gathering the view of the workforce.” This is a very different formulation from the prime minister’s speech, which implied an intention to see an employee representative sit on every board. The code, however, offers boards three options: appointing a director from the workforce, setting up a workforce advisory panel, or giving the responsibility for collecting employee opinion to a designated non-executive director. 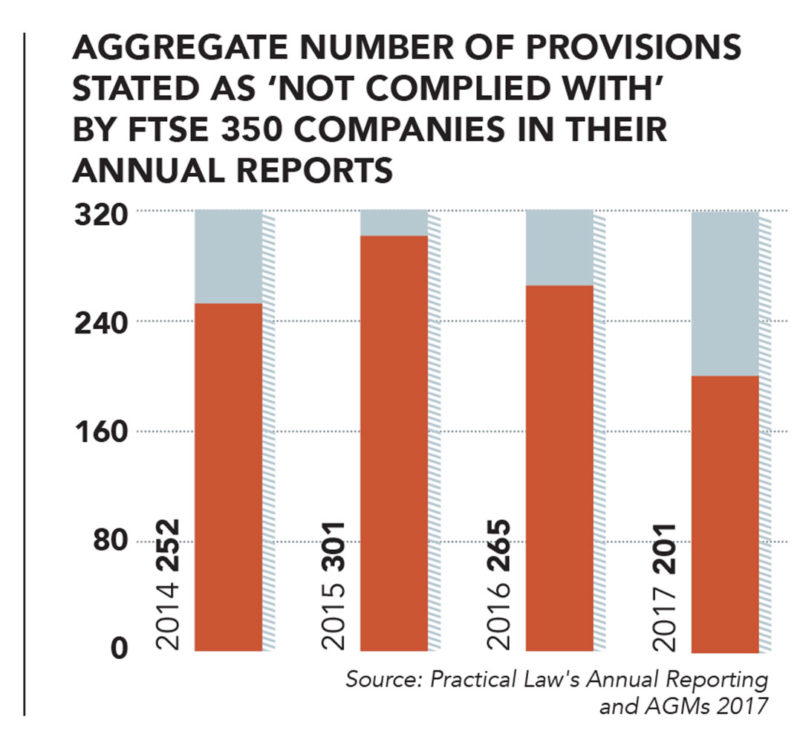 This was a disappointment for many who hoped it would become mandatory for a worker to take part in board meetings, as happens on the continent. From the moment the proposal was aired by Theresa May there were those who argued against it.

According to Janet Williamson, senior policy advisor for corporate governance at the Trades Union Congress (TUC), rowing back to offer more than one option was a “shame” because companies were showing signs of coming round to the idea of an employee with a seat in the boardroom.

“We hope that businesses won’t see those options as the limit of what they can do. We would like to see companies choosing to include elected worker directors on their boards,” says Williamson.

Perhaps where there is agreement, however, is on the turn the code has taken. Firstly, it is restructured, grouping together “provisions” with related key principles. This is viewed by some—including Chris Hodge, policy adviser at ICSA: The Governance Institute—as an effort to persuade boards to go beyond a tick-box compliance exercise to understand and respond more to the principles painstakingly crafted for the code.

But the code has another new departure: it’s emphasis on stakeholders. Janet Williamson says that before the revision, the code’s emphasis was on “relationships between the board and shareholders, or about executive pay.”

“That’s changed,” she says. “The inclusion of a vision for stakeholders contributing to company success is a step change in the code.”

And Chris Hodge says: “Putting it up front and centre is quite a shift in focus.” A shift which demands boards think about strategies that do more than simply increase share price, but also benefit “wider society”.

In many respects the discussion about stakeholders has been sitting in the background of business affairs for some time.

In many respects the discussion about stakeholders has been sitting in the background of business affairs for some time. Indeed, section 172 of the Companies Act 2006 describes directors’ duties as including a “regard” for “the impact of the company’s operations on the community and the environment,” and “the need to foster the company’s business relationships with suppliers, customers and others…”.

However, the need to think of stakeholders has been highlighted during the discussion that has focused on how to fix the flaws in capitalism since the financial crisis of 2008. The code’s recognition of “stakeholders” can be seen as part of that repair.

Chris Hodge says the code has two purposes. The first is to offer best practice guidelines. “The other is to set the agenda for what people should be thinking about,” he says. Many will see that as particularly important in relation to stakeholders and a wider discussion of company purpose. The FRC’s move becomes part of the process of fixing capitalism.

And that comes with a warning: one for Theresa May’s policy objectives, and another about codes in general. Hodge believes giving the code a social equality objective is problematic, given that it is enforced by shareholders. And corporate scandals? Criticising the code for failing to stop them is “misguided”.

“It may reduce the likelihood, but it’s never going to eliminate it,” he says.

Principle A
A successful company is led by an effective and entrepreneurial board, whose function is to promote the long-term sustainable success of the company, generate value for shareholders and contribute to wider society. The board should establish the company’s purpose, strategy and values, and satisfy itself that these and its culture are aligned.

Principle C
In order for the company to meet its responsibilities to shareholders and stakeholders, the board should ensure effective engagement with, and encourage participation from, these parties.

Principle J
Appointments to the board should be subject to a formal, rigorous and transparent procedure, and an effective succession plan should be in place for board and senior management. Both appointments and succession plans should be based on merit and objective criteria, and promote diversity of gender, social and ethnic backgrounds, cognitive and personal strengths.

Provision 1
The board should assess the basis on which the company generates and preserves value over the long term. It should describe in the annual report how opportunities and risks to the future success of the business have been considered and addressed, the sustainability of the company’s business model and how its governance contributes to the delivery of its strategy.

Provision 2
Directors should embody and promote the desired culture of the company. The board should monitor and assess the culture to satisfy itself that behaviour throughout the business is aligned with the company’s values. Where it finds misalignment it should take corrective action. The annual report should explain the board’s activities and any action taken.

Provision 3
The board should establish a method for gathering the views of the workforce. This would normally be a director appointed from the workforce, a formal workforce advisory panel or a designated non-executive director. There should also be a means for the workforce to raise concerns in confidence and (if they wish) anonymously. The board should review this and ensure that arrangements are in place for the proportionate and independent investigation of such matters and for follow-up action.

Provision 4
The board should explain in the annual report how it has engaged with the workforce and other stakeholders, and how their interests and the matters set out in section 172 of the Companies Act 2006 influenced the board’s decision-making.

To read the full consultation documents, see the FRC website.