The UK’s Financial Reporting Council has published proposals for a streamlined governance code, while research from Mazars, in association with ecoDa, finds compliance with the existing framework to be variable. 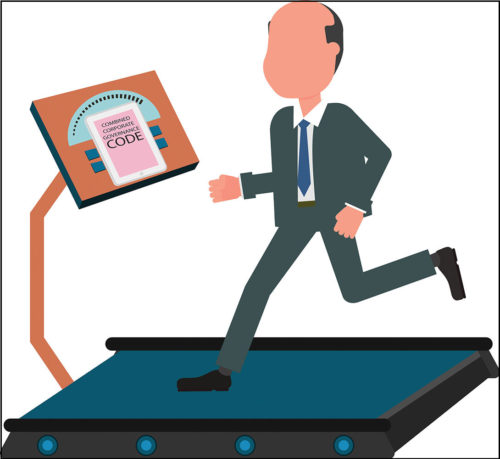 Corporate governance is rarely out of the business headlines. In spite of 25 years of an evolving corporate governance framework for UK-listed companies, in the wake of any high-profile collapse or breach, the finger of blame inevitably tends to etch out terms such as “management failure”, “domineering bosses” or “toxic company culture”.

Last December (2017), the Financial Reporting Council (FRC) brought out proposed revisions to the UK Corporate Governance Code, which it oversees, with an aim to simplify and make the code fit for purpose for the next 25 years.

One of the FRC’s key considerations was to attain an appropriate balance between principles, provisions and guidance, while retaining the code’s perceived strengths—particularly its “comply or explain” approach. A refreshed code will help promote continued improvements in the quality of governance, the FRC argues, while adapting to changes in the social and economic climate.

In one sense, the newly drafted code is a much-needed edit. “The UK Corporate Governance Code had revision laid on revision and was getting longer and more complex,” says Anthony Carey, UK head of board practice at Mazars. “The new draft is more concise and much better designed, so as to highlight key issues—sharpening focus on long-term success and reinforcing the role of stakeholders.”

There are also important updates that reflect greater awareness of issues such as diversity, he adds. Boards, when properly focused on this, will tend to evolve so that they mirror the ethnic and gender make-up of their own companies, and “utilise all the talent that is available to them,” explains Carey.

Importantly, the FRC’s updated code will retain one of Sir Adrian Cadbury’s most significant innovations—comply or explain.

Carey believes that in the UK, comply or explain works satisfactorily as long as it is used responsibly. “Among large, listed companies, most comply with provisions fully or ‘explain’ with regard to just one or two provisions,” he says.

“It is important, when companies choose to explain, that they make clear how they are applying the principle, the reason for the departure and whether it is likely to be temporary or not.”

To provide a wider, European perspective, a survey carried out by Mazars and ecoDa—the European Confederation of Directors’ Associations—has found that out of 137 EU-listed companies, 59% make use of the flexibility offered by comply or explain, while the remaining 41% choose to comply in full. Of those that opt to comply, 44% do so because they believe all code provisions are relevant to their business objectives.

Interestingly, comments from respondents suggest that explanations are not necessarily well received by the wider stakeholder community, suggesting that comply or explain may be a mixed blessing.

“The ‘explain’ element is not taken up by the outside world as being valid, compared to a ‘comply’,” said one. “On the contrary, it is always referred to as ‘not compliance, not respecting the code’, while the intention was to allow deviation if justified.”

According to the survey, the majority of “explainers” say they use explanations to elaborate mainly on board membership issues, such as the length of service of non-executive directors or their representation on remuneration committees.

Length of service and degree of participation are crucial issues. Before Cadbury, boards were regarded as little more than clubs, and the feeling was that directors need do little more than present themselves at meetings. Post-Cadbury, the modern board has evolved, but a framework to deter long tenures and to promote active participation in the issues of the business remains important.

“Traditionally, in the UK, the issue normally arises in the context of directors having served on the board for more than nine years,” says Carey. “If you combine a board that is not engaged with long-serving non-executives or with boards where members have served together for too long a time, board effectiveness will be challenged,” he adds.

For boards to be effective, engagement on both an individual and a collective level—or how well they bring their collective experience and expertise to bear—are vital, Carey explains. That will include how well the board provides both challenge and support to the executive team.

Perceptions of independence are important, he says, particularly when it comes to complying with provisions within the code. However, independence of mind is really critical. “Board members must have the courage to ask difficult questions in a constructive manner,” Carey says.

Of those companies that do involve shareholders, 52% said shareholder discussion did not result in any amendments to frameworks, and major amendments were made in only 14% of cases.

In today’s environment, Cadbury would likely want to see boards focused on promoting long-term sustainable success as a priority.

The Cadbury Report of 1992 and the adaptations that followed in the quarter-century since then have fostered an evolution in terms of board composition and performance. Corporate collapses and scandals still take place, however, and, given the sheer heft of some of the world’s listed companies today, the ramifications can be considerable.

The collapse of large banks argues the point forcefully, as does the loss of a retail or a construction giant. So it is understandable that the FRC or national governments might argue there is more to be done.

In today’s environment, Cadbury would likely want to see boards focused on promoting long-term sustainable success as a priority, Carey suggests, with an emphasis on making sure that they operate effectively in practice and do not just look good on paper. Disclosures in the annual report, he says, should provide the starting point for effective engagement by leading investors with the board.

A continually evolving corporate governance framework, with a strong focus on the stewardship code for investors as well as the national governance code, should assist in clarifying how this objective can be achieved.