Proposals for a “shorter, sharper” UK Corporate Governance Code have been published by the Financial Reporting Council (FRC), with more focus on “issues which are of genuine concern to shareholders and other stakeholders”. 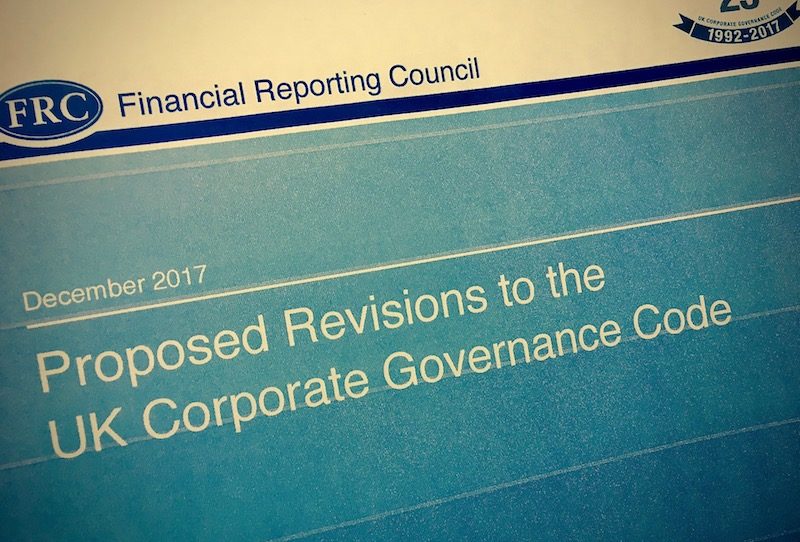 Proposals for a “shorter, sharper” UK Corporate Governance Code have been published by the Financial Reporting Council (FRC).

Building on the findings from the FRC’s 2016 Culture Report, the revised Code focuses on the importance of long-term success and sustainability, addresses issues of public trust in business and aims to ensure the attractiveness of the UK capital market to global investors through Brexit and beyond.

The proposals say remuneration committees should be allowed to override formulaic outcomes, and will need to show how remuneration policies and practices reflect the UK Corporate Governance Code and align with company strategy and wider pay and other policies.

“Whether it is fit for purpose remains to be seen, when it becomes apparent whether the changes have had the desired effect—but it seems likely that this will be the case.”

CMS partner Graham Muir said that one aspect of the new UK Code that is not exclusively remuneration-related, but whose significance may be of most relevance on remuneration issues, is the proposed framework for dealing with significant shareholder opposition to a shareholder resolution.

“Where more than 20% of shareholders vote against a resolution, the company should initiate a consultation process with shareholders to understand the rationale for the opposition vote and, no later than six months after the vote, publish an update on the actions taken in that regard,” he said.

Muir added that the revised Code will clearly be materially shorter, and seems to be more focused on the issues which are of genuine concern to shareholders and other stakeholders, and in that way will be “sharper”.

“Whether it is fit for purpose remains to be seen, when it becomes apparent whether the changes have had the desired effect—but it seems likely that this will be the case.”

“Comply or explain”, he said, has been the approach of the UK’s governance code from the very outset, and while the effectiveness of that approach has been criticised over the years, it seems to have been more effective in recent years, in the context of the culture of increased shareholder proactivity and activism.

“It therefore seems likely that, where compliance is not forthcoming, the relevant explanations will need to be well-reasoned and justifiable to avoid shareholder disapproval and possible subsequent negative shareholder activity. In that way, one would expect the changes to have a real effect going forward.”