We may know the benefits of gender diversity in theory, but in reality there are still too few women on boards. Setting targets and challenging unconscious bias could help, argues Fiona Hathorn, MD of Women on Boards. 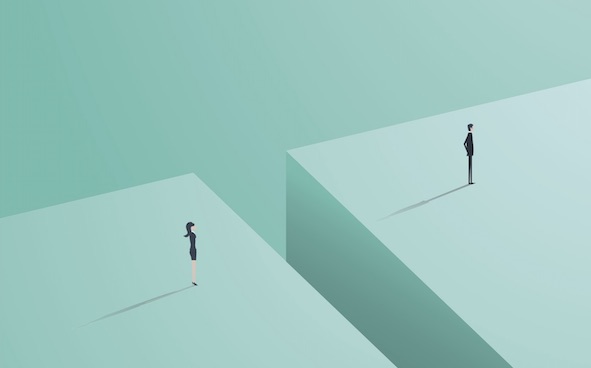 Has the C-suite truly bought into the business case that diversity makes us smarter?

The short answer is that we’ve made some progress in the boardroom, but mainly on the non-executive director side—the easy option, some might argue.

When it comes to internal company executive appointments, cultural change requires investment and the will to use data to set objectives and track progress: what gets measured gets managed, and what gets managed gets done.

Men don’t intentionally keep women down, but they are not aware of the significant role that men play…

Our society is hardwired with biases and assumptions that limit us. Women need to overcome their self-limiting beliefs imposed by society, but men need to help women by welcoming them into their departments and teams. After all, only very few individuals cope well when they are not welcomed by others.

Men don’t intentionally keep women down, but they are not aware of the significant role that men play and, importantly, they don’t see themselves as a major part of the solution.

Billions have been spent on this by global firms hoping to change behaviour. It hasn’t. Training in unconscious bias only lets your employees know why you are working on changing the company’s culture; we all have biases and they are so deeply ingrained that they are almost impossible to change. A one-hour training course cannot transform those deeply ingrained, unconscious views. This is just one tiny part in a “change programme” where hearts and minds have to be won over.

Research shows that four-year-old girls and boys have few biases. By six years old, however, they have learnt how their society perceives how they should behave.

But why is diversity important for business? Because diversity makes us smarter, improves margins and increases a country’s GDP as business grows faster.

This is not just wishful thinking: it is the conclusion drawn from decades of research from organisational scientists, psychologists, sociologists, economists and demographers.

According to Katherine W. Phillips in Scientific American, diversity enables innovation. Different people have different ideas. Research shows that socially diverse groups (those with a diversity of race, ethnicity, gender and sexual orientation) are more innovative than homogeneous groups.

Diversity enhances creativity, improves the bottom line and leads to unfettered discoveries and breakthrough innovations. It also enables problem-solving. And it changes the way you think. Simply interacting with individuals who are different forces group members to prepare better, anticipate alternative viewpoints and expect to achieve a consensus.

Increased productivity and profits come from numerous sources and result in better business outcomes; greater customer loyalty; better negotiations and team effectiveness; efficient capital usage; and talent retention. It takes a lot of work and a unified team to leverage individual strengths in an integrated way, but the practical and creative insights of different perspectives make it worthwhile.

Organisations with only one type of employee will need to become more aware and more savvy if they are going to survive. Modern styles of leadership are now flat rather than hierarchical, with the leader sometimes choosing who steps into the middle depending on the specific issue of the day. The current buzzword in management is authenticity, not hierarchical command.

To make a difference ask yourself these questions: How balanced is my leadership team? Does my team have a wide spectrum of styles, traits, strengths and behaviours to ensure that we are ready for everything? Do my team members understand different styles of thinking and respect those styles to ensure results?

What else can I do to gain the advantage of an integrated leadership model?

Let’s turn to practical implementation. How do you make things better for women and minorities, to enable them to get to the top within a level playing field?

Setting targets and talent management is key. To have a merit-based system you must ensure that you manage talent and ensure blockers are removed and opportunities are enhanced.

We have targets for everything in business, so why not for talent management? If you don’t have targets then it says something about you—are you scared?

The most common argument I hear against setting targets is: “It will affect performance, and we only hire on merit.”

Firstly, there is no evidence that targets affect performance. Secondly, the implication here is that if women are disappearing from the pipeline, it must be that they have less merit. Given that women have historically outperformed men—albeit slightly—after leaving secondary school, in most university faculties, and through to the mid-levels of most large organisations, the argument that there are simply not enough talented women is a very shaky one.

This is not fully explained by child-rearing, and it cannot be rationally explained as an evaporation of women’s talent at mid-career. So, if organisations are already meritocracies, and women have as much performance potential as men when they arrive in organisations, merit is clearly not as effective at identifying talent as the conventional corporate wisdom suggests. Why is this so?

Merit is not a fair measure

Research has shown that an obsession with a merit-based preoccupation in hiring activates stronger unconscious bias. The result is that hiring decisions made using merit as a focus are more biased in favour of men, compared with decisions made using fairness as a focus, for equally qualified male and female candidates.

The fact is that merit is not fair, nor does it guarantee objectivity. Merit is a movable feast of self-referential assumptions and stereotypes on the part of hirers. Despite good intentions and egalitarian values, no-one is immune from these assumptions, or their largely unconscious impact on decision-making.

Women do not lack merit (or confidence, for that matter). What they lack is a close enough resemblance to the prevailing masculine assumption about what leaders looks like. Quotas simply ensure that these dynamics are ruled out of hiring decisions.

If we are content to let social evolution take its course, we effectively sacrifice the next two generations of talented, ambitious women and girls to gender roles and stereotypes.

However, the blanket application of quotas can be problematic. Without careful tailoring, quotas can be counter-productive for industries that struggle to attract women in the first place. They can also result in cynical attempts to make up numbers by making token female appointments, or parachuting women into “new” roles. However, from my experience, executives who have diversity targets as part of their performance measures already engage in these strategies.

Targets or quotas can do three things that are essential to achieving real progress in gender balance, at least in my lifetime.

Search and selection processes become more rigorous and more innovative. Companies that now focus on “diversity of thinking”, or diverse collective intelligence, should take note that rigorous, bias-proofed, innovative search and selection practices are critical to enhancing an organisation’s collective intelligence by bringing in a broader range of talent more quickly. If this is your aim, quotas are a remarkably effective way of forcing recruiters to question their assumptions, check their biases, and think outside the square.

Unconscious bias in selection becomes a non-issue. Organisations continue to spend a large amount of money, time, and effort on unconscious bias training in order to reduce its effect on recruitment decisions. While this continues to be important, de-biasing could be achieved much more quickly and cost-effectively by applying a gender-balance quota for roles where a reasonable talent pool of women exists.

Temporary special measures achieve a critical mass quickly. If we are content to let social evolution take its course, we effectively sacrifice the next two generations of talented, ambitious women and girls to gender roles and stereotypes. Quotas can force our hand and ensure that we see talent in all its guises. There is no more motivating factor for the current generation of girls and boys than to know that their aspirations won’t be constrained by baseless assumptions about their capabilities.

It’s time for organisations to engage in diversity of thinking to better understand whether their reservations about quotas are actually based on evidence or assumption.

Overall, today’s gender pay gap is 19%, and 9% for full-time workers, on average. But within the highly paid sector it is much higher. Mark Carney, governor of the Bank of England, announced recently that the gender pay gap within the financial services industry is 39%.

I do not know what it is in the legal profession but I suspect it might be above the UK national average.

Fiona Hathorn is managing director of Women on Boards UK and a trustee of the charity Fight for Sight. She is a former investment director for Old Mutual Asset Management and Hill Samuel Asset Management, running the global equities and emerging markets desks respectively.