An imagined dialogue between Milton Friedman, the economist who has come to represent the shareholder primacy world view, and Socrates. 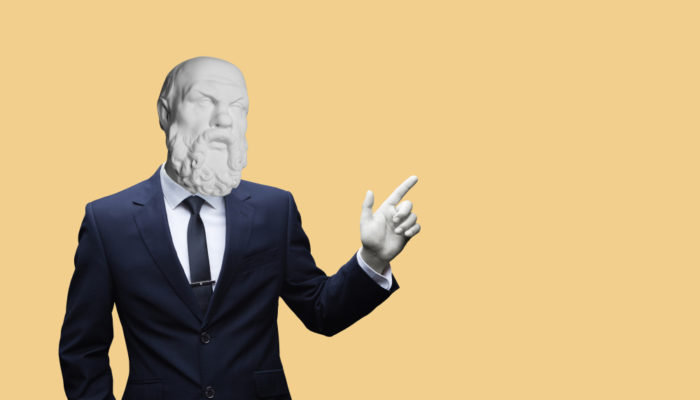 The now venerable management scholar Charles Handy asked “What’s a Business For?” in an article published in Harvard Business Review in 2002. Charles Handy has often been ahead of the times—he anticipated the business process outsourcing phenomenon long before it become a standard part of the corporate playbook—and the question he posed in 2002 is has now become one of the current topics in business and management journals.

In August 2019 Business Roundtable, an association of the chief executive officers of major US corporations, redefined the purpose of the corporation to “promote an economy that serves all Americans”.

Since 1978 Business Roundtable has periodically issued principles of corporate governance. For at least the last 20 years these have endorsed the principle of shareholder primacy—that corporations exist with the primary purposes of maximising value for shareholders. The new statement instead “affirms the essential role corporations can play in improving our society when CEOs are truly committed to meeting the needs of all stakeholders”.

In the UK, Professor Colin Mayer of Saïd Business School at Oxford University, has been leading a major research and engagement programme examining the purpose of business and its role in society at the British Academy, the national academy for the humanities and social sciences. The Future of the Corporation—Purpose Summit, conducted online from 22–24 June 2020 because of the coronavirus pandemic, has recently been examining a proposed new definition of the purpose of business—“to profitably solve the problems of people and planet, and not profit from creating problems”.

I have been reflecting on the question of corporate purpose for some time. A letter in the Financial Times published in June this year caused me to buy a copy of Plato’s Gorgias and, on reading it, to realise that the question dates back to ancient times.

The question dates back to ancient times

Reading Plato leads me to imagine a dialogue between Socrates and Milton Friedman, the American economist who perhaps more than anyone else has come to represent the shareholder primacy world-view. I imagine that the discussion might have gone something like this…

SOCRATES: Well, Milton, I understand that you believe that the only social responsibility of business is to maximise profits for shareholders.

FRIEDMAN: That’s right, Socrates. In a free-enterprise, private-property system, a corporate executive is an employee of the owners of the business. He has direct responsibility to his employers. That responsibility is to conduct the business in accordance with their desires, which generally will be to make as much money as possible while conforming to their basic rules of the society.

SOCRATES: Thank you, Milton, for stating your position very clearly. Now would you mind if I asked you some questions about this proposition?

FRIEDMAN: Why not, Socrates, I would be happy to answer your questions. I am very certain of my position on the question of corporate purpose.

SOCRATES: Here we go then. Now, would you say that the purpose of a physician is to cure illnesses or make as much money as possible?

FRIEDMAN: Well, Socrates, I know some well-paid doctors, but if I asked them why they chose their profession I am sure that they would say it was to cure illnesses and to help their patients towards better health.

SOCRATES: And if one of your doctor friends answered the question the other way and said that they were trying to make as much money as possible, would you regard them as a good doctor?

FRIEDMAN: Obviously, it is to provide a location where doctors can carry out their duties.

SOCRATES: Their duties to cure illnesses and help their patients towards better health?

FRIEDMAN (cautiously): No, I don’t think it would make any difference.

SOCRATES: Then can I ask a follow-up question, Milton? If the purpose of a hospital is to cure illnesses and help patients towards better health, then what is the purpose of a pharmaceutical company which provides drugs for the hospital?

FRIEDMAN (even more cautiously): I suppose it is also to cure illnesses and help patients towards better health.

SOCRATES: So the purpose of a company like AstraZeneca or GlaxoSmithKline is to cure illnesses and help patients towards better health?

SOCRATES: Not maximise profits for shareholders?

FRIEDMAN: Ah, I see where you are going, now. Yes, I suppose that your argument is valid.

SOCRATES: And is the purpose of hospitality company to provide hospitality for their guests, and an airline to help passengers travel between different locations?

FRIEDMAN (now rather irritated): Yes, yes, I suppose so.

SOCRATES: And the purpose of an oil and gas company to provide oil and gas for their customers?

FRIEDMAN: Yes, as long as all these companies make sufficient profits to satisfy their shareholders.

SOCRATES: But would you agree that making sufficient profits to satisfy shareholders is a secondary objective rather than the primary purpose of these companies?

FRIEDMAN: Yes, Socrates, I have to accept that you argument is a very strong one. Now, I have just remembered that I have an urgent conference call, please do excuse me. Our conversation has, as always, been most enlightening.

There is no need to labour the point any further. Plato knew the answer all along. It is time to rethink the doctrine of shareholder primacy which has dominated economic thinking and business practice for too long. Creating value for shareholders is a supplementary objective, rather than the primary purpose of business. We need a new ideology to replace shareholder primacy.

Alexander Pepper is professor of management practice at the London School of Economics and Political Science.