Signs of change at the top as BDO is ranked second only to PwC by number of listed clients—although FTSE 100 audits remain the preserve of the Big Four. 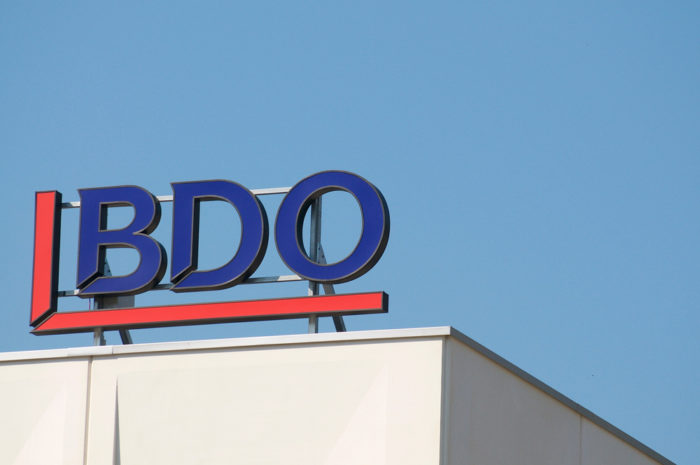 Change may be under way in the audit market, albeit tentatively. BDO, an audit firm outside the global Big Four, has become the second largest firm by number of listed clients in the UK, overtaking KPMG and coming second only to PwC.

According to figures from data provider Adviser Rankings, in the second quarter of 2020 BDO had 297 UK listed clients compared with 262 in the same quarter of last year. KPMG’s total dropped from 349 to 286. PwC, with the largest number of listed audit clients, has seen that number fall from 355 to 326.

There is speculation that the numbers may represent a change in the much-debated UK audit market place after years of reviews and discussion. However, caution is required. While BDO has made steep gains in the number of clients it serves, dominance of FTSE 100 audits remains the preserve of the Big Four firms: PwC, KPMG, EY and Deloitte.

The FTSE 100 is a key index because it is often used to frame the debate about the concentration of audit contracts in the hands of the four big providers. Failure to shift any of these audits to alternative service providers may indicate a lack of confidence among audit committee chairs that other firms are capable of undertaking the work.

In truth, the FTSE 100 is overwhelmingly dominated by PwC. That said, the firm has lost the audit of Rio Tinto, the mining giant, to KPMG. Meanwhile, the audit of Standard Chartered has shifted to EY from KPMG, and PwC has gained the audit of mining firm Anglo American from Deloitte.

BDO’s clients are predominantly on the AIM All Share, Fledgling and Smallcap indexes, many of them won from Big Four firms. If ranked by the aggregate market cap of their audit clients, the Big Four retains all top four places, while BDO comes in sixth.

A report from Adviser Rankings said: “BDO turned in the most impressive performance through the quarter, regardless of the unfavourable circumstances. The auditor registered multiple gains through the period, enabling it to supplant KPMG in second place in the table behind PricewaterhouseCoopers.”

The audit market is a hotly contested issue in the UK. Recent years have seen a number of reviews probing the regulation of auditors, the functioning of the audit market and the content of audits. The recent round of examinations were prompted for the most part by the collapse of the construction giant Carillion in December 2017.

House of Commons committees probed the role of the auditor and audit regulator in the scandal and published a host of recommendations. However, it was a series of independent reviews that produced an extensive set of far-reaching proposals.

In perhaps the most significant development, the Kingman Review recommended the replacement of the Financial Reporting Council (FRC), the UK’s audit and governance watchdog, with a new regulator, the Audit, Reporting and Governance Authority (ARGA).

An investigation by the Competition and Markets Authority resulted in recommendations for the introduction of new powers to publicly reprimand audit members, the introduction of mandatory joint audits and the operational separation of audit function from other services inside an audit firm.

The Brydon Review, published at the end of last year, recommended that the “true and fair” principle—the guiding star of current audit opinion—be replaced by a new principle he said would bolster transparency in auditing and accounting as well as shore up the responsibility of company directors to produce reliable accounts.

The review also recommended extending the role of audit to cover fraud, and giving auditors a new statement of purpose that underlines its public interest role. The report came in the same week the Queen’s Speech confirmed the UK government’s intention to push ahead with reform to audit and corporate reporting.

However, with government resources at first dominated by Brexit and then by the Covid-19 pandemic, there has been little sign of legislation to cement the reform into the UK’s audit market.

In October last year Sir John Kingman—author of the Kingman Review—issued a public complaint about the lack of progress on making the reforms.

Some changes have taken place. The FRC has appointed a new chief executive and chair, as well as launching a recruitment campaign to beef up its ranks in anticipation of taking on new responsibilities and gaining new powers.

While the reforms are incomplete, recent figures may show that years of debate could be producing its own change. However, as long as this shift has taken to come about, it may as yet still be too early to judge.