The founder of organic farm and veg box delivery firm Riverford, Guy Singh-Watson, explains what’s wrong with “testosterone-fuelled boards”, and why he believes in employee ownership and a purpose beyond profit. 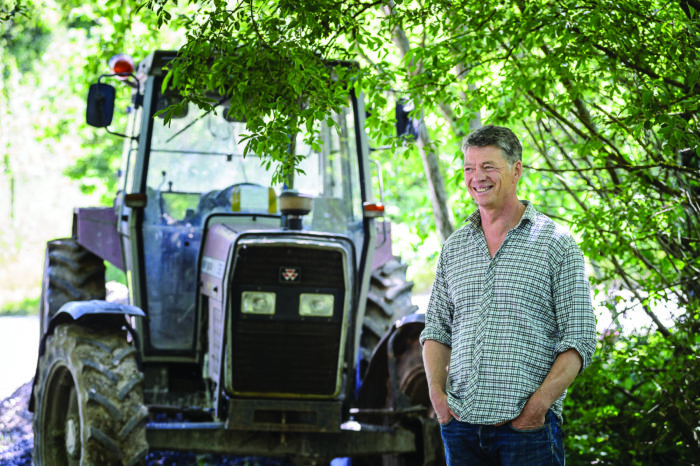 There can’t be too many corporate leaders around whose day can include boardroom meetings and an attempt to cull perennial weeds that threaten freshly planted trees. But that is Guy Singh-Watson, founder of Riverford, the fruit and veg delivery service that has the UK’s organic produce lovers salivating at the mere mention of its name.

Riverford (disclosure: your reporter is a subscriber) has built a reputation not only for good service and great-tasting green-grocery, but for being a company that does the right thing: cares for suppliers, employees and the environment.

Last year, however, Singh-Watson—a self-confessed “veg nerd”—and his farms hit the headlines for a new reason: much of the business was given over to the ownership of employees. British foodies have taken Riverford to their hearts so when the company’s workers were granted ownership through a trust, it made headlines everywhere.

Indeed, so enthralled have media outlets become by Singh-Watson’s veneration of veg while railing against big business, “greedy” venture capitalists and “testosterone-driven” merchant bankers in his now notorious customer newsletter, they have turned him and the company into a public persona.

BBC Radio 4’s Desert Island Discs dedicated a programme to his life and favourite music; The Independent published Riverford food tips while the i newspaper has run a Riverford Christmas turkey recipe. The Telegraph has interviewed Singh-Watson, and The Guardian’s business pages ran the company’s results even though technically, it remains an SME (sales were up by 9% to £56.7m in the 12 months to May 2017, although profits were down due to investment in new packing systems).

Riverford has edged its way into becoming a worthy, purpose-driven part of the media and business landscapes. But it was the changes to the capital structure that really caught the eye of many business observers.

The company went from being owned by Singh-Watson and his former wife to being 74% owned by staff through an employee-ownership trust. That caused a change in the governance structure. There is now a board that reports to the trust, which is made up of elected staff members and external appointees. There is also a staff council that manages appointments to the trust.

Singh-Watson himself remains a member of the board, as a substantial shareholder (26%), though he says that eventually his own holdings will be sold to the trust. While he was once chairman, he no longer holds that position, but he is heavily involved in working on the farms (Riverford owns land in the UK and France) as well as planning the crops and business strategy.

The reasons for employee ownership are ostensibly about just that: ownership and how it affects the organisation and its stakeholders. Singh-Watson, once a young consultant in New York before returning to the family farm in Devon, says his original thought was that ownership should be shared among employees, suppliers, customers and local people. The legal challenges of achieving that, however, were too big.

Instead, the company opted for employee ownership on a model very close to John Lewis, one of the UK’s most respected retailers. However, Singh-Watson is quick to point out that the articles of association have been designed to ensure that Riverford cannot be run solely for the benefit of employees.

Singh-Watson still wants Riverford to work for a wider group of stakeholders, a direct echo of his distrust of City financiers. He calls it his “visceral reaction” to the traditional financial system which he finds “abhorrent”.

He also believes quite profoundly that boards simply do not have all the answers. Singh-Watson casts his mind back to just before the financial crisis, a time which saw the seeds of employee ownership sown.

“I was getting several phone calls a week from VCs, merchant bankers and so on, wanting to help me maximise the value of the business. And I suppose it became apparent that I really have quite a visceral reaction to that; that all these people are working within, supposedly, a values-driven business but actually it’s all just there to make venture capitalists more money.”

Singh-Watson adds: “We’d much rather be answerable to our staff through a council than we would to external investors who are constantly going to be wanting quarterly results and hassling us over the share price and so on…”

From that emerged the idea that the business should be structured to benefit its stakeholders. And Singh-Watson says the employees have impressed him thus far. In fact, he describes himself as “astounded” at their “level of collective responsibility and just how sensible they are, actually.”

High praise indeed, and he says it was staff during the consultation, before transition to the new ownership structure, who raised concerns about whether it might slow down decision-making.

Poignantly, Riverford’s structure shift comes at a time when UK companies are still debating the role of employees on boards as a result of a revised corporate governance code. Early polling suggests that few companies are likely to welcome workers into the boardroom.

Singh-Watson is not surprised. He is somewhat appalled by what he describes as the “arrogance of boardrooms” and the assumption that they alone possess the knowledge for decision-making.

“I suppose it’s something that I have been guilty of myself, to some extent,” he says, “but experience is showing just what a fallacy that is.” He adds that he would be lying if he said there had been no resistance to greater employee involvement at Riverford but says it’s something the business is “working on”. He adds: “… the more experience we have, I think, the more relaxed we feel about it. ‘We’ being the board.”

There are times when talking to Singh-Watson that it could be assumed he hates all other businesses. But that is not the case. Asked if he has any respect for mainstream business Singh-Watson does not hesitate to say that he does, and he praises the automotive industry for its ability to innovate, producing cars that are “environmentally better than they have ever been.” What he also appreciates is the way car makers work. “It’s an incredibly sophisticated industry that thrives on long-term relationships between suppliers and manufacturers, and I’ve got a lot of admiration for that.”

“I do accept that competition and the free market and innovation do sit very well together, and for us to challenge that, I am very well aware of what we’re up against”

But that takes Singh-Watson to a discussion of what he doesn’t like, and some of the trade-offs that Riverford manages. “I have less time for companies that don’t do anything other than manage a brand and build shareholder value based on that. But I do accept that competition and the free market and innovation do sit very well together, and for us to challenge that, I am very well aware of what we’re up against.”

Singh-Watson freely admits that one element of that challenge is Riverford’s lack of flexibility, compared with competitors. Riverford’s adherence to strong supplier relationships means it may be slower to adjust to customer demands, Singh-Watson concedes. But, he says, Riverford values those relationships and stands by them, which may mean it is slower to adapt.“… we have to compensate for that, in many ways, just by being better at what we do, and by telling our story better, and by trying to get our customers to invest in the same values. And I think we’ve been pretty successful at that,” he says.

Competition, as the guiding feature of business, is not all good, Singh-Watson says. “Generally in this world I think there is just more to be gained from collaboration than there is from competition.

“I mean, if boards weren’t quite so dominated by testosterone-fuelled men, I think we would have a little bit more of that sort of [collaborative] behaviour. So much of it is that sort of approach; it’s just about male egos and, I don’t know, I find it all a bit denigrating of us as human beings, really.”

And what of Riverford in the future? The answer brings Singh-Watson back to purpose. “To continue in certain areas challenging the norms of farming and food and business, and trying to show that there is a better way,” he says. “I would like to wait two or three years and just see how the employee ownership [model] plays out, but assuming that we can make it work, and I have every confidence that we can, I would like to promote that as an alternative model.”

He adds: “So I suppose we will be a modestly growing, campaigning organisation that will stay true to its values. “If I walk down the valley from where I live and find that that’s what the business is doing in 20 years’ time, that will make me very happy.”