Higgins, Board Agenda’s resident cartoonist, seems to think that some board executives just don’t get this whole sustainability thing—but their businesses will lose out in the end if they don’t embrace it. 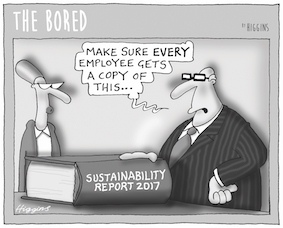 There’s always a buzzword, isn’t there? Only, this one is here to stay. Sustainability, that is.

Boards are beginning to wake up to this fact, but for many it’s difficult to change, as Board Agenda’s resident cartoonist Higgins illustrates. For too long boards have viewed sustainability as a subject to be siloed.

But it is not just a set of abstract ideals to be contained within the dusty covers of a mighty tome. It’s a concept to be embraced and lived by the whole business.

Speaking of mighty tomes, annual reports are swelling in size—and yes, of the paper variety, since boards are lagging behind the imminent digital revolution.

There’s something incongruous about the goal of sustainability and the reality of boards stuck in a papery past, but sustainability is about more than saving trees. It’s about 360-degree thinking, so that everyone benefits: people and planet, as well as business.

Let’s just hope those laggards can get up to speed. After all, the survival of their business depends on it.