Boards are beginning to acknowledge that sustainability is no longer a siloed concept, but a crucial strategy that lies at the heart of responsible, profitable business, with long-term rewards for both stakeholders and society. 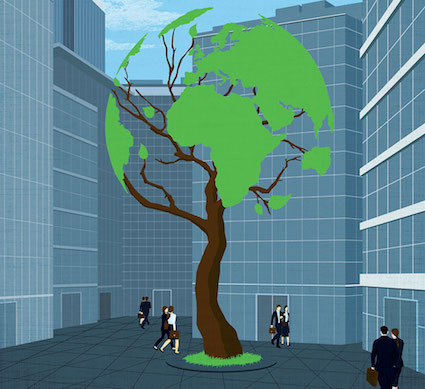 Sustainability has become more than a trendy buzzword in business in the past few years as an increasing number of companies are putting it at the centre of their strategies.

Boards are waking up to the fact that there is more to a sustainably run business than eco-friendly behaviour. They are seeing the broader picture and shifting to a business model that takes more responsibility for all stakeholders—including employees and supply chains—and focuses on efficient, cost-effective operational strategies that can help boost the bottom line.

“Business leaders are realising that it is not possible to run a successful company in isolation from society and the natural environment in which it operates.”

–Stephen Farrant, director of sustainability, Business in the Community

“Business leaders are realising that it is not possible to run a successful company in isolation from society and the natural environment in which it operates,” says Stephen Farrant, director of sustainability at Business in the Community, the responsible business network. “Profits and value for both shareholders and society are at the heart of the model.”

He believes that the United Nations’ Sustainable Development Goals, rolled out two years ago to tackle poverty, inequality and climate change by 2030, are playing an important part in global business thinking.

In the UN Global Compact–Accenture Strategy CEO Study carried out last year, 87% of global chief executives said the goals triggered a rethink on approaches to sustainability (see box, below). And nearly half (49%) agreed that the role of business was vital to achieving the UN goals. 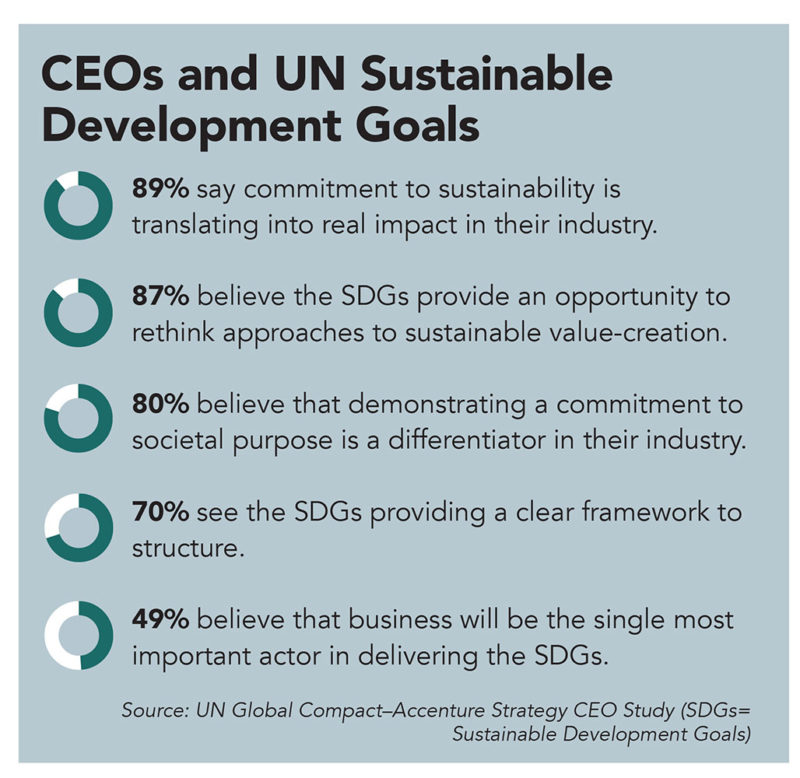 George Dallas, head of policy at the International Corporate Governance Network—led by investors responsible for more than $26trn of assets—points to an evolution in the way companies and investors view sustainability.

“In the past, sustainability was seen more as a separate CSR [corporate social responsibility] silo but now boardroom conversations are focusing on this,” he says.

Over the past decade a number of factors have driven the shift. Among these are environmental disasters, climate change, an increasing exposure of abuse of labour rights, particularly in supply chains, and inequality of opportunity, forcing companies to improve their governance and responsibility. “These issues can no longer be avoided,” Dallas says.

Public and investor anger at the controversial Dakota Access oil pipeline in the US with regard to  violating human and environmental rights, and the scandal at Volkswagen, the German car maker caught cheating over diesel emissions, make sharp lessons for any board. The reputational damage that can follow malpractice and irresponsible behaviour is also pushing risk management to the top of the boardroom agenda.

“Without investor engagement, sustainable strategies would not be at this level in the boardroom. Investors have been behind issues such as conflict minerals and human trafficking for the past 20 years.”

Investors are asking more questions about business strategies and increasingly looking to put their money in companies that build sustainable business models to protect the environment and human rights.

Some years ago the Norwegian oil fund, the world’s biggest sovereign wealth fund, sold out of companies such as coal and gas extractives that caused severe environmental damage. Pension funds are also scrutinising their exposure to the fossil fuel sector because of concerns over poor sustainability in their business model.

“Without investor engagement, sustainable strategies would not be at this level in the boardroom.”

Earlier this year, a group of 79 big institutional investors, who are signatories to the Workforce Disclosure Initiative, sent a questionnaire to 75 listed companies to gain more information on work practices. Schroders, the asset manager; USS, the Universities Superannuation Scheme; and Nordea Wealth Management, the Scandinavian fund are among those pushing for better disclosure.

The move comes after labour practice at Sports Direct, the retail group; Uber, the taxi company; and Deliveroo, the food delivery service came under parliamentary scrutiny in the UK.

Unsafe working conditions in supply chains of multinational retailers have also come under the spotlight since the Rana Plaza disaster in Bangladesh in 2013, when the collapse of a garment factory killed more than 1,100 workers. Ongoing concerns of investors and human rights’ groups have forced management to take more responsibility for their supply chains, pushing the issue of sustainable practice into the centre of the boardroom.

Pressure on companies that fail to adopt a responsible, sustainable approach to business is likely to come from Sir David Metcalf, who was appointed by the UK government earlier this year as the country’s first labour enforcement tsar. He is currently looking at ways to tackle unscrupulous practice such as wage violation and supply chain negligence.

Some countries, such as Belgium and Australia, already hold big contracting companies and those further down the supply chain jointly liable for labour malpractice. France has gone a step further. Earlier this year it became the first country to adopt a law to make large companies responsible for the human rights, labour conditions and environmental practices of all the companies in their supply chains. Heavy fines will now be imposed on large companies that flout the new legislation.

“This is a compulsory game-changer; it helps the best French companies to work in a sustainable way and brings those violating human and labour rights to account.”

“France is out in front,” says Phil Bloomer, executive director of the Business & Human Rights Resource Centre. “This is a compulsory game-changer; it helps the best French companies to work in a sustainable way and brings those violating human and labour rights to account.” Bloomer is encouraged by the progress of a group of international business leaders who “are working to achieve long-term value and sustainable strategies”, but he is worried about “the long list of laggards who are just doing window dressing or nothing at all”.

Results from the Resource Centre’s 2017 Corporate Human Rights Benchmark show that only three out of 98 large global companies—BHP Billiton, Marks & Spencer and Rio Tinto—score more than 60% on human rights policies and practice, while the average is just 29%.

Unilever, the Anglo-Dutch consumer goods group, which scored between 50% and 59%, was one of the early movers to launch its Sustainable Living Plan, a blueprint for embedding environmental and social goals into the business in 2010.

“Unilever was one of the first to make public its report on human rights issues, in accordance with the UN Principles for Responsible Investment guidelines,” says Compere. She believes that the UN principles introduced in 2006 have helped to push sustainability to the fore.

Unilever now sources just over half (51%) of its agricultural raw materials from sustainable suppliers, and aims to increase this to 100% by 2020. This ambitious programme also aims to halve the waste that comes from the disposal of its products by the same date. On the brand front, the company’s sustainable strategies are proving good for business. Last year, Unilever’s 18 sustainable brands grew 50% faster than the rest of its products and contributed to 60% of total growth.

Other companies also recognise the benefits of changing to a sustainable business model. One of these is Anglian Water Services, a UK regional utility, which won Business in the Community’s Responsible Business Award this year for its environmental and social impact. The company’s shift to an integrated sustainable business model in 2008 was driven by the challenges of climate change and population growth, prompting a rethink of how to run the business, says Andy Brown, head of sustainability. Now the business is “all about environmental, human and financial sustainability”.

The water company adopted its “Love every drop” sustainable strategy, which includes goals to reduce pollution, leaks and wastage. It reduced operational carbon emissions by 10% and cut its carbon footprint from its construction projects by 50%, from 2010 to 2015. It also reduced its energy bill by more than £20m in the same period.

Anglian Water is currently working to reduce its operational carbon by a further 7% by 2020 and to meet the board target of reaching full carbon neutrality by 2050. Brown says that more companies, nationals and multinationals have adopted a sustainable business approach in the past five years, at least “the enlightened ones”.

Peter Swabey, policy and research director at ICSA: the Governance Institute, believes sustainability has always been part of the mainstream, but “now there is more awareness, which makes the quality of discussion around the board table better.” This helps companies to communicate better with shareholders, he says. Progress on appointing a more diverse mix of board members, including environmental or human rights experts, in some cases, has raised standards on sustainable practice. However for a sustainable strategy to succeed it needs to be “driven by the whole board and the CEO needs to buy into it,” he adds.

Companies that run their business in a sustainable way are recognising new opportunities that arise.

Companies that run their business in a sustainable way are recognising new opportunities that arise. Engineers and designers at Anglian Water are designing projects digitally such as water-treatment works, using 3D goggles to walk through a proposed site to test it before building begins. “It saves time, resources, rework and allows employees to get familiar with it digitally,” explains Brown.

Business leaders are also realising that a sustainable model is more likely to attract a wider talent pool, particularly young professionals who are concerned about business’s impact on society and the environment. In Deloitte’s 2017 survey of millennials (see graphs, right), which spans 30 countries, 76% of respondents said business overall was behaving in a more responsible manner and having a positive impact on the wider society in which it operates. But 74% also said that multinationals could do more to alleviate society’s biggest challenges, such as economic and social progress, conflict, inequality and corruption.

The UN 2017 report on its Sustainable Development Goals shows that the rate of progress in many areas, including sustainable energy and infrastructure, is far slower than needed to meet 2030 targets, and urges governments and all stakeholders to make more efforts. Sustainably run companies also have to fight entrenched short-term shareholder thinking, particularly activist investors keen to gain fast returns.

“Shareholders need to realise that profits do not build up each quarter with a short-term payoff, and to focus on long-term sustainable value,” says Dallas.

Concerns over global events and adapting to longer-term financial returns can raise questions among shareholders over whether it is the right time for a more sustainable approach to business.

Farrant points out that there will always be acute short-term pressures on business, and believes that “the best way to insulate against shocks is to make sure sustainable strategies are in place.” And he has no doubts about the timing. “The business case for running a sustainable business is no longer an optional add-on. It is becoming less possible to do it without,” he says.