The Taylor Review of work in the UK concludes that corporate governance and not regulation is the best way to improve employment prospects for Britain’s workers. 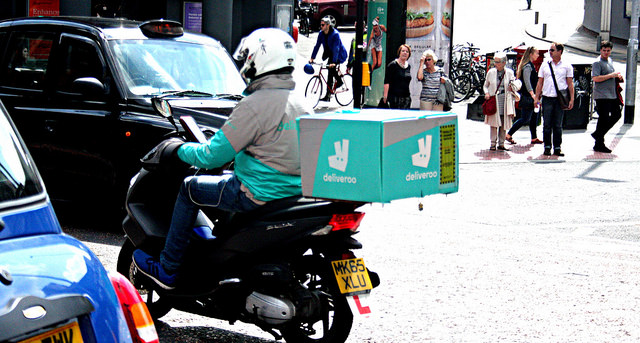 Deliveroo, one of the firms suggested by the Taylor Review where workers should become 'dependent contractors'. Photo: Kevin Jones, Flickr, CC0

Corporate governance and not regulation should be at the heart of improving the world of work for the UK’s employees, according to an independent review commissioned by the government.

The much-anticipated Taylor Review recommends a new employment status—”dependent contractor”—for employees working for internet platforms such as Uber and Deliveroo, and recommends a national strategy to provide “good work for all”.

But it adds: “The best way to achieve better work is not national regulation but responsible corporate governance, good management and strong employment relations within the organisation, which is why it is important that companies are seen to take good work seriously and are open about their practices and that all workers are able to be engaged and heard.”

The report holds back from recommending that company boards need a worker representative.

It says: “We do not have a strong view on whether workers should be directly represented on company boards, as they are in some other countries, or whether other solutions would work better in a British context.

“However we very much share the view that company owners have a wider responsibility towards the people who work for them—both directly and through their supply chain—and should take this responsibility seriously.”

The report concludes workers such as those at Uber and Deliveroo should be allowed to continue to work flexibly but they should be granted fairness at work. Dependent contractors should receive additional protections from employers.

It says: “Dependent contractors are the group most likely to suffer from unfair one-sided flexibility and therefore we need to provide additional protections for this group and stronger incentives for firms to treat them fairly.”

The reports calls for strategies to ensure that workers in low-paid sectors do not become stuck on their rate of pay and that individual workers should feel they can make progress.

The review comprises “seven steps towards fair and decent work”.

It has been criticised by unions. Tim Roache, GMB general secretary, said: “Given the epidemic of precarious work in the UK, this report simply does not go far enough in fixing a broken system that gives employers the choice of whether to treat their workers fairly or not.

“Action on the Gig Economy is overdue, but help for agency workers, those on zero-hours or short-hours contracts won’t happen by asking nicely or hoping bad employers find a moral compass down the back of the couch.”