Targets may have been met but many boards still fail to address gender diversity and many have no plans to do so, writes Dina Medland. What’s going on? 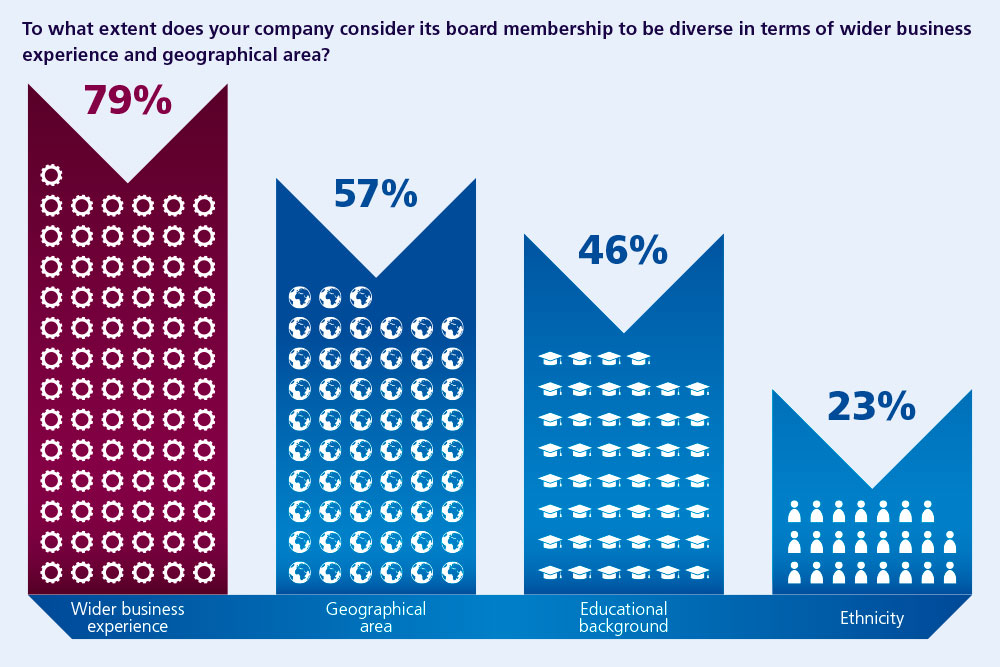 More than four years after the UK government’s launch of an initiative to raise the number of female non-executive directors in FTSE 100 boardrooms—and thereby prove to the European Union that it could be done via a voluntary approach—targets have been met. But the extent to which diversity as a strategy is present in FTSE 350 boardrooms as a whole is still unclear.

In mid-July 2015, the government announced that the target of 25% women in the boardrooms of the top companies had been achieved. It also shifted the focus by simultaneously announcing new requirements for business on the disclosure of pay by gender.

The news came ahead of a decision by the European Commission on mandatory quotas, which is imminent: on whether or not to introduce them for each gender in non-executive board positions. The proposal would apply to about 5,000 companies across the EU.

While the UK’s achievement in increasing gender diversity in FTSE 100 boardrooms is considerable, a boardroom bellwether survey of FTSE 350 companies, published just before the government announcement, tells a slightly different—and potentially more accurate—story about widespread attitudes.

Carried out by ICSA—the Institute of Chartered Secretaries and Administrators (ICSA) in association with the Financial Times—the survey canvasses the views of all the FTSE companies by contacting the company secretary twice-yearly. This summer it found that 31% of companies, up from 22% in December 2014, now say that their companies will not meet the target. Furthermore, when those companies not expecting to hit the target were asked about their plans in place to meet gender diversity targets, 63% said they had no such plans.

Increasing gender diversity at the top of the FTSE 100 is arguably an easier task than in the smaller companies.

Increasing gender diversity at the top of the FTSE 100 is arguably an easier task than in the smaller companies. The businesses are more international, they have larger boards, they are far more visible and therefore susceptible to reputational pressure, and they can attract a wider pool of talent.

Therefore, looking to the FTSE 250 may yield more insight into attitudes in British business to diversity. Critically, FTSE 250 companies are also seen as the feeder pool for boardroom roles in the FTSE 100.

“Experience on the smaller boards is necessary to be appointed onto the major boards,” says the Female FTSE Board Report 2015 by Cranfield’s International Centre For Women Leaders . Yet, as it indicates, “the number of companies with female executive directors fell again this year … with the result that only 4.6% [of] executive directors in FTSE 250 companies are women. This is where we were in 2012

The FT–ICSA Boardroom Bellwether report is also telling in its canvassing of views when it comes to broader definitions of diversity—essential in order to avoid the “groupthink” demonstrated by the financial crisis. FTSE 350 businesses seem confident that their boards offer diversity of business experience, geography and even educational background.

But, asked about ethnic diversity in the boardroom, just 23% of those surveyed considered their board to be ethnically diverse. “This is, perhaps, unsurprising but should be an area of future focus for nomination committees,” says the report. It is also perhaps surprising that they have never been asked the question before.

It is still widely acknowledged that boardroom composition should be representative of a business, and that a lack of diversity amounts to risk.

Regardless of whether or not individual boardrooms buy this argument, it is still widely acknowledged that boardroom composition should be representative of a business, and that a lack of diversity amounts to risk.

Dr Ruth Sealy, senior lecturer at City University in London and the lead researcher for Cranfield’s Female FTSE report since 2007, says: “Boards need proactively to seek diverse candidates, focus on skill sets and the breadth of experience candidates can add to the overall matrix of skills and appoint a member of the board who is responsible for diversity.”

Diversity, she adds, is another aspect of the need for senior management to manage succession planning. The UK watchdog on corporate governance, the Financial Reporting Council (FRC), has made it clear that it is turning its focus in this direction. “Succession planning is essential to delivering an effective business strategy,” says David Styles, director of corporate governance at the FRC.

Just over half (54%) of respondents to the FT–ICSA survey reported that they had written a succession plan for the board. These findings raise the question of the extent to which boardrooms look forward on strategy, and whether, four years on after the Davies Review, they even begin to consider diversity as an essential part of that conversation.