Making strategy is a process that can generate friction—and can also be a positive force to help an organisation adapt and respond to unexpected events. 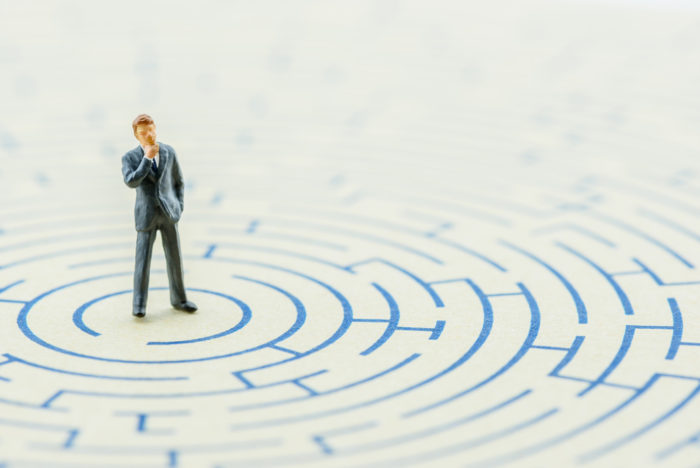 Strategies never go according to plan. The strategy guru Igor Ansoff referred to “turbulence” in the strategic environment which forces plans to be reshaped and rethought as events unfold. But what is true of the strategy itself is also true of the process of strategy making in the first place. As the board of Libraries Unlimited discovered, making strategy is a process that can generate friction and can also be a positive force to adapt and respond to events.

Early in 2020, the board of Libraries Unlimited, a charity representing over 50 libraries across Devon and Torbay, discussed refreshing its strategy. With a new chief executive, chair and board of trustees established, some members of the board rightly felt it was high time to revisit the organisation’s priorities, having been through a significant journey of transitioning from local government to an independent charity.

As a starting point, Will Harvey, chair of the board, provided a short summary table, reminding the board of the mission of Libraries Unlimited—“to bring ideas, imagination, information and knowledge to people’s lives and communities”—alongside its six core purposes: 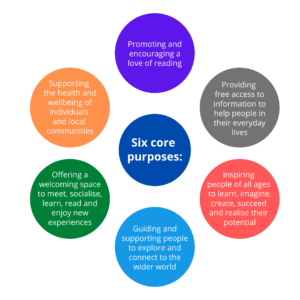 Guided by the Annual Review of the UK’s Corporate Governance Code, Harvey understood that one of the board’s core roles was to establish the organisation’s “purpose, values and strategy, and satisfy itself that these and its culture are aligned”. This guided his approach to working with the chief executive to create a one-page table summarising Libraries Unlimited’s mission, purpose, values, strategy, goals and measures.

The intent of Harvey’s approach was to create a document that provided a high-level overview for the board, which could also be shared and discussed with the board, senior managers, staff and other stakeholders. Alongside, the one-page table, Harvey included a glossary of terms to ensure everyone was aligned with the terminology, as from his experience people can differ considerably in how they understand the concepts of mission, purpose, goals, values, strategy and measures. They were:

Pushing back on the strategy

At the board meeting in April 2020, Harvey explained that his intent was to ensure that the board agreed around three areas: first, its role in forming a strategy, second, the language used in relation to different aspects of the strategy, and third, the details of how we connect the broader aspects of Libraries Unlimited’s activities (e.g. its mission, purpose and values), with the more specific details (e.g. its strategy, goals and measures). At the board meeting, a frank and prolonged discussion ensued about the strategy with some board members content with the broad summary level of the document, while others either wanted more ambition, detail, or information on the “why” and “how” behind the strategy.

While reluctant board members agreed to approve the document, Harvey was adamant that the board should own and back the strategy

While reluctant board members agreed to approve the document, Harvey was adamant that the board should own and back the strategy. He also reflected that the debate around the strategy recognised that changes were needed in the process of creating a revised strategy. While this was a setback for Harvey as it challenged his own views of the strategy and delayed its approval, he felt that he needed to propose a different path forward.

Consequently, he asked one of the more outspoken critics of the strategy, Morgen Witzel, to form and create a task and finish group with three broad parameters: first, do not throw the baby out with the bath water when moving to the next version of the strategy; second, do not make the process overly burdensome and time-consuming for senior managers and board members; third, ensure the process of revising the strategy is not overly prolonged.

Harvey suggested some other members to join the group, including the chief executive and two additional board members who were lukewarm about the first version of the strategy. Otherwise, Witzel was given full autonomy to manage the process as chair of the task and finish group without the interference of Harvey as chair of the board.

Meanwhile, the discussion about strategy had been overtaken by events. The Covid-19 pandemic forced Libraries Unlimited to close its physical buildings and reduce its services. Although a limited reopening was anticipated by mid-summer, it was clear that there would be no swift “return to normal”.

Equally, it was evident that the pandemic would have a very powerful social impact on communities in Devon and Torbay. Issues such as rising unemployment, growing gaps in educational attainment and a steep rise in mental health issues, including depression and loneliness, were all predicted. All of these problems related directly to Libraries Unlimited’s six core purposes illustrated above.

The task and finish group swiftly changed course. Members agreed that an immediate response to the pandemic crisis was mandated. Mindful of the brief, the group set itself a target of three weeks to come up with a strategy. Ultimately, it took just under four weeks to deliver the final draft of the group’s findings.

As chair of the group, Witzel first held individual conversations with each member, including the chief executive, a staff trustee who also held a senior service delivery role, and the finance trustee. The presence of the CEO and two staff and community trustees was invaluable, both acting as “reality checks” to keep the group’s feet firmly on the ground. Following these one-to-one conversations, Witzel summarised the findings and then the entire group met via Zoom to discuss and approve them. Mindful of the brief, the aim was not to produce a detailed strategy but a set of strategic objectives for Libraries Unlimited, all relating back to the core purposes and building on the earlier work done by the chair and the chief executive. The five objectives agreed were: 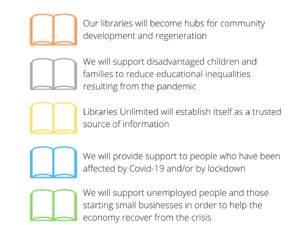 The final draft objectives were then taken back to the board for approval. After a fairly short discussion, all five objectives were approved and the executive team began to work immediately on operational plans to deliver on them.

The process was important and it left both Harvey and Witzel with much to reflect on. First, it was informative to see how quickly the new set of strategic objectives was pulled together and approved. This suggested a high degree of alignment among the board and the executive team about Libraries Unlimited’s purpose and mission, despite the earlier disagreement. Second, it is possible that the post-Covid strategic objectives might not have emerged, or at least might not have emerged in the fashion they did, without those earlier discussions and Harvey’s subsequent decision to review the process. The reflective thinking shown by all board members was key to achieving a positive result.

Both Harvey and Witzel are aware that the discussion of the board’s role in strategy making and formulation still needs further discussion. How the board receives strategy and what it ultimately requires from the executive still need to be tested further. However, both are confident that the experience of the post-pandemic strategy gives the board food for thought going forward, and should enable it to find the right balance in a harmonious way. Confronting the crisis has changed how the board thinks about strategic issues, and about how we work together.

Lessons for other board members

We would suggest four lessons for other board members. First, while push back and critique of a strategy, or any board agenda item, can appear on the surface as an indication of board dissent or dysfunction, it can also suggest a positive culture where members feel able to constructively challenge the material presented to them. This does require careful management of the discussion by the chair to ensure the tone of debate is both developmental and helping the board towards making good decisions.

Second, empowering other board members to lead on strategy can help to gain wider consensus provided that there are some clear parameters to avoid the process becoming unwieldy. In our case, Harvey providing clear guidance for the task and finish group and asking Witzel to chair the group and include the more outspoken critics of the strategy, plus the chief executive and staff and community representatives, ensured that we had some clarity around the process and a broad perspective within the group. That diversity of thought was very important; as Witzel observed on one occasion, everyone sees the same picture but they are approaching it in different ways.

Third, when initiating or revising a strategy, it is important to be open rather than prescribed about the outcome. Board and wider engagement of a strategy stems not only from what is presented to them, but how they have been involved in the process of its creation. In our case, the task and finish process led to the successful creation of a Covid-19 strategy which is a central component of our existing strategy, but is not the end point of the Board’s involvement in the organisation’s strategy, which continues to evolve.

“Generally speaking, it is for management, rather than the board, to propose strategy. This is not an impediment to the board taking the initiative in an appropriate case. But management is best able to dedicate time to strategic thinking and is likely to have greater industry knowledge and experience.

“Nevertheless, it is the board’s responsibility to understand, test and endorse the company’s strategy. In monitoring performance, the board needs to measure management proposals by reference to the endorsed strategy, with any deviation in practice being challenged and explained.”

Will Harvey is chair of the board of Libraries Unlimited, and professor of management and associate dean at the University of Exeter Business School.

Morgen Witzel is a board member of Libraries Unlimited, a fellow of the Exeter Centre for Leadership, and a writer about leadership and ethics.

board effectiveness, board expertise, board strategy, coronavirus, Morgen Witzel, strategy, Will Harvey