Steven Baert, the group head of human resources at Novartis, explores the thinking behind culture change at the Swiss pharmaceuticals behemoth. 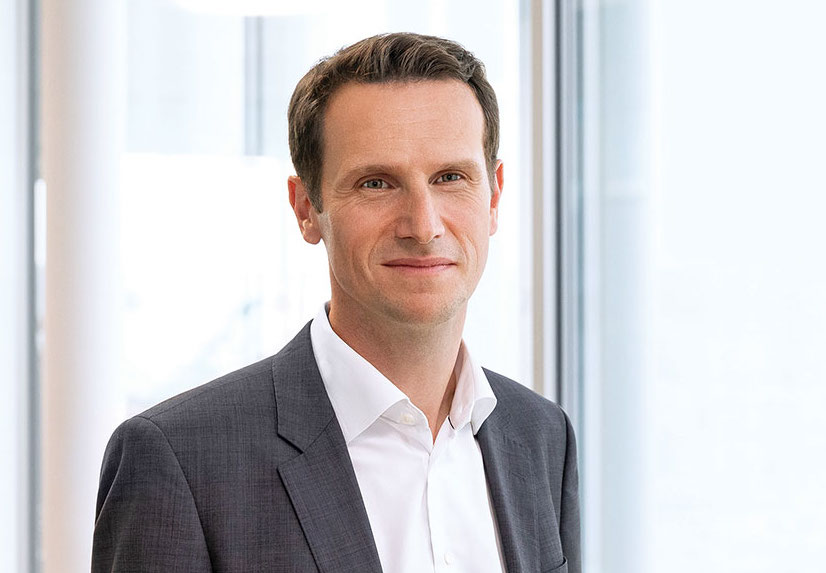 Launch into a conversation about culture change at Swiss pharmaceuticals giant Novartis with Steven Baert, the company’s head of human resources, and you get a swift response. He’s happy with progress but: “We can’t declare victory yet.”

“If you define a strategy as what it is you want to do, the culture is how you get it done.”

This is no mere statement of modesty. This is Baert indicating what he sees as a fundamental tenet of culture change: it’s an ongoing process and needs constant attention. The interesting thing about Novartis is that the company has become known for having placed culture at the heart of the business. And that’s not only since the appointment of new chief executive Vas Narasimhan.

Culture was already a key part of his selection process when Baert sat down with chairman Joerg Reinhardt, and other members of the board, to map out what the company wanted from a CEO.

Innovation at the heart of strategy can lead to only one conclusion, he adds. “In order to innovate, you have to have an environment that stimulates the sharing of ideas, which stimulates some appropriate risk-taking. And then you are directly into culture.”

Baert has been in his current post since 2014, though he joined Novartis in 2006 and has held a number of senior roles within the organisation, including head of human resources—global functions—and heading HR for growth markets and oncology. Overseas, Baert has headed HR for the company’s operations in the US and Canada. Prior to Novartis, Baert held top roles at Bristol-Myers Squibb and Unilever. He also represents Novartis on the board of a joint venture with GSK Consumer Healthcare.

It’s also worth noting that the web page devoted to detailing members of the Novartis executive committee lists Baert second after the chief executive. There may be nothing in that, but more often such pages place the CFO directly after the CEO.

Novartis itself is huge—listed, as it is, among the five largest pharmaceutical companies in the world—with annual revenues in 2017 of $49.1bn (€40.41bn or £35.2bn), 2% up on the previous year, and employing around 122,000 people across Switzerland, Germany, Spain, Indonesia, Malaysia, France, Ireland, Belgium, Poland, Slovenia and Singapore.

The company’s medicines span cardio-metabolic, immunology, ophthalmology, respiratory, neuroscience and oncology. It is a highly complex organisation spending around $9bn a year on research and development for drugs sold in 155 countries around the world. 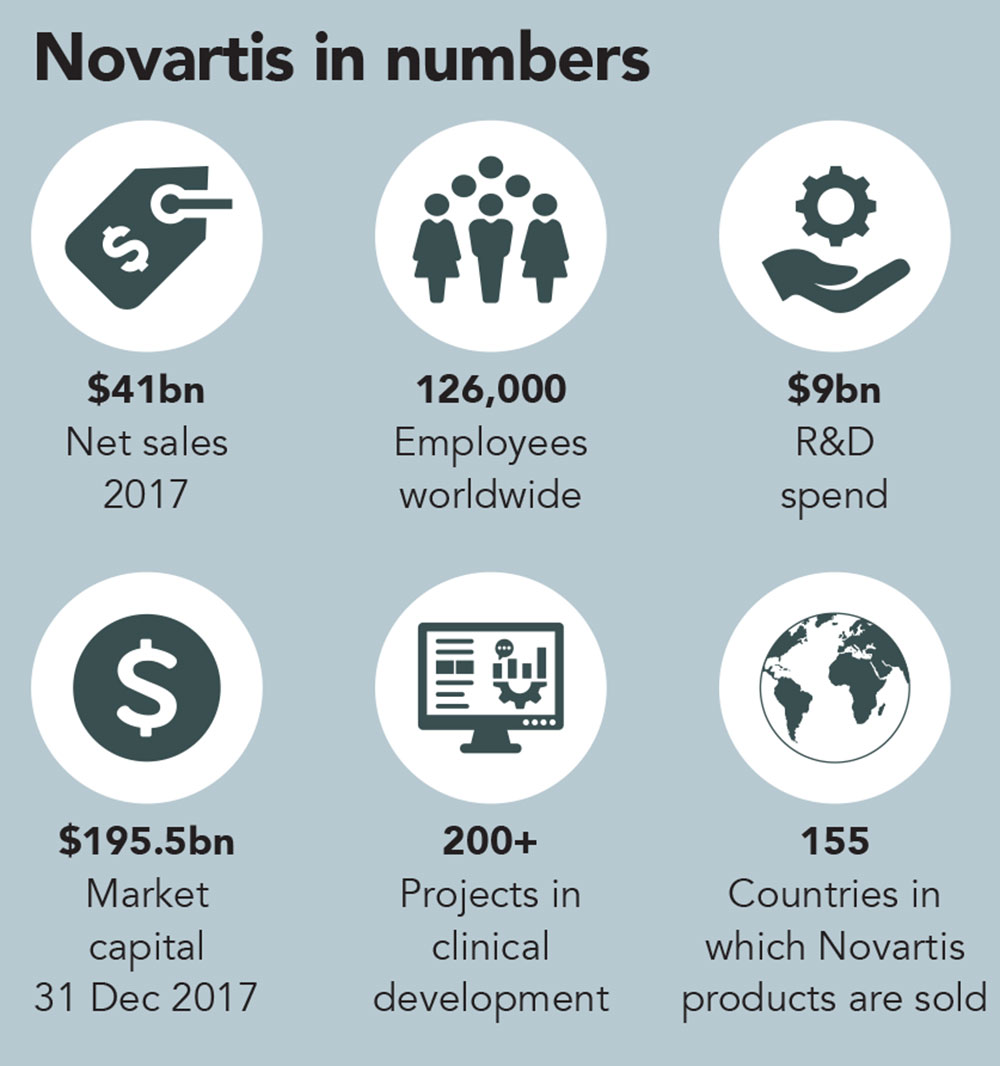 With an R&D budget of that scale, innovation is a premium activity, and a culture supporting that aim is crucial. Chairman Joerg Reinhardt, who joined Novartis from Bayer Healthcare, has been talking about culture for some time. In 2015 he told Handelsblatt, the German newspaper, that he wanted to change culture in the organisation.

“We have introduced a new value system and it includes a few which are particularly close to my heart: teamwork, courage and integrity. It is important that Novartis becomes more than the sum of its parts.”

Reinhardt also mentioned what the company was hoping to achieve. “When it came to cultural orientation, Novartis had more of an aggressive top-down culture, and Bayer had more of a consensus-orientated, loyal one. I personally think that a middle ground between the two is right. We are working on that.”

The company’s work has been noticed elsewhere including Forbes, which has namechecked the effort to shift emphasis in culture in an article poignantly headed When business performance falters, is culture change the fix?

The shift at Novartis has received fresh energy from the appointment of Narasimhan. Baert indicates that his placement in the chief executive’s seat was, in fact, a product of thinking on culture.

“That became a very conscious selection criterion, “ says Baert. “We now have a CEO who clearly prioritises culture, and also communicates internally and externally very openly about that.” Culture, adds, Baert is a journey that Novartis is on, and the new CEO’s arrival saw it “accelerate”.

The issue Novartis is trying to tackle, says Baert, is the risk of being reliant on top-down ideas-generation, which might actually impede the progress of innovation. If the company can achieve purpose, empowerment and curiosity, “you get better innovation”.

“We want a purpose-driven culture, he explains. “We certainly want people who feel empowered. What this means, if you are a leader, is that you also need to be a servant-leader towards your teams. We want teams that are constantly curious about new ideas.” And culture is critical because it is part of the trinity of elements that go into achieving strategy alongside decision-making structures and leadership capability.

“If you have 120,000 people who don’t believe in the strategy that leadership has set out, we may as well go home.”

Baert says that culture equates to employees believing in the strategy and feeling that they are able to act on it, and that they are motivated to achieve on it. “If you have 120,000 people and they don’t believe in, or they don’t feel like they can act towards achieving the strategy that the leadership has set out—you know you may be in trouble and we may as well go home,” says Baert, who raises the spectre of Kodak’s demise as a warning about failing to manage culture.

“Kodak had the organisation and capabilities to go digital, but the culture of the company was not ready to make that stretch from paper to digital.”

There are four main drivers of change, according to Baert. First is the senior leadership “role modelling” of the right culture and values, in collective and one-on-one meetings.

Second is a group of early adopters who have become part of what Baert calls an “unboss” movement of culture change. They began as a group of 20 and have now grown to 400 champions inside Novartis eager to lead change.

Next comes confronting processes inside the organisation which fail to chime with the desired culture. Baert says this means changes to performance management and incentive systems, as well as other processes that are blocking the kind of empowerment the company seeks. This might also include the way people are hired and promoted. “You need to do the painful work addressing some of the processes,” says Baert, “and then you need to make it part of your DNA.”

The fourth driver of change is what Baert calls a crowdsourcing approach, pulling in contributions from contractors for Novartis. On top of this Baert is reporting directly to the board on progress. What he believes though is that culture change doesn’t work unless its owned by employees.

“It’s very important that it is not seen as a top-down or, in our case, what people would refer to as a ‘Basel’ [the company’s HQ] initiative…we don’t want this to be a corporate initiative.”

It’s no coincidence that the new chief executive is undertaking a tour of the company’s international operations but is deliberately avoiding performance reviews. His focus is on people and culture.

“He is not doing reviews…he is leaving that to his division heads and region heads. He is spending his time meeting with people, talking to them, learning about their initiatives and talking about his vision for the company and how he wants to change the company,” says Baert. This also achieves the aim of putting some distance between the company now and its reputation for being “aggressive’ in the past.

The tour, Baert says, is an opportunity to send a message that he wants to tap into the ideas of the 122,000-strong workforce. There’s also an effort on the part of Novartis to lead by example. Baert describes how Narasimhan recounts his experience of initially getting things done by being very analytical and very hardworking, but how he reached some limitations at a point in his career.

“Every leader goes through a stage where you only get so much done through your own strengths, and you need the strength of a team.” Narasimhan openly shares that example whenever he can, says Baert. “Having the courage to show some vulnerability and some self-awareness, and talking about your own leadership journey, of course, adds a lot of credibility and invites a lot of people to also do some self-reflection and show the willingness to evolve their leadership style.”

“Every leader goes through a stage where you only get so much done through your own strengths, and you need the strength of a team.”

Novartis is using a culture-measuring tool from Human Synergistics, which colour-codes behaviours: red for aggressive, blue for constructive behaviours. Baert agrees that the chief executive’s tour is firmly in the blue zone, which he describes as a collaborative, exploratory style of behaviour.

However, while Novartis is using measures such as Synergistics, some engagement analytics, exit surveys and internal social media use, Baert offers some caution on becoming over-reliant on measures, or any specific indicator that might offer a judgement on whether efforts regarding change are working.

According to Baert, the company will know when things have changed because it will show in the results. But: “We want to avoid the culture becoming a workstream that is completely separate from the business reality, that it is an HR or corporate initiative. It should be fully embedded in how you do business.”

Novartis will continue working on culture. But does it still “eat strategy for breakfast?” Baert has a nuanced response: “In short, I would say yes, it still holds true, for the simple reason that it puts the topic on the agenda, and it stimulates a culture discussion. In reality, I think you need strong strategy, and then you need the culture that directly supports the implementation of that strategy.”

Steven Baert has been head of HR at Novartis since 2014 and serves as a member of the company’s executive committee.

He joined Novartis in 2006 as head of HR global functions in Switzerland. Baert has held several other senior HR roles, including head of HR for emerging growth markets, and global head, HR, oncology. He has also served as head of HR, United States and Canada, for Novartis Pharmaceuticals Corporation.

Prior to joining Novartis, Baert held HR positions at Bristol-Myers Squibb Co. and Unilever. He currently represents Novartis on the board of the GSK Consumer Healthcare joint venture.