Katharina Latif of insurance giant Allianz explains how her climate and sustainability team transitioned from the firm’s fringes to its strategic centre—and what its next steps will be. 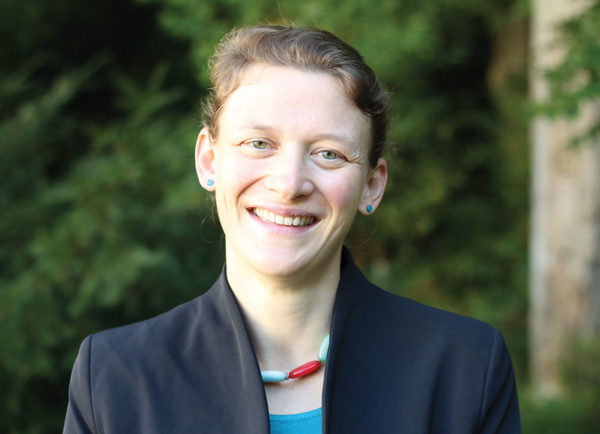 A team of “crazy experts” preoccupied with what was once deemed an “ivory tower topic,” the climate and sustainability unit at German insurance giant Allianz has travelled from the periphery of the company’s thinking and strategy to its “core” over the past decade.

So says Katharina Latif, Allianz’s head of corporate responsibility and one of the lead architects of the company’s sustainability strategy. It is Latif who self-effacingly references herself and her colleagues as “crazy”.

With the Paris accord on climate change, however, and global recognition of sustainability through the UN’s Sustainable Development Goals, teams like Latif’s are no longer the oddballs housed in isolation, but the pathfinders helping drive corporate thinking across the world.

“Whatever it is, there’s always an aspect of how Allianz can act as a responsible company.”

“You travel, you sign a deal, you onboard your clients, you hire an employee. Whatever it is, there’s always an aspect of how Allianz can act as a responsible company. So, I think, yes, this is really a journey which has evolved over the past years,” says Latif.

The journey theme is one which Latif returns to when describing Allianz’s effort to turn itself into a responsible business. And that effort has been recognised. In September last year the business was named the number-one sustainable insurer by the Dow Jones Sustainability Index. No mean feat and a sign that the work is being noticed.

Given Allianz’s sheer scale, this recognition is no small achievement. The insurance behemoth, 127 years old, took revenues of €122.4bn in 2016 with an operating profit of €10.8bn. Assets under management amount to €1,871bn, a hefty level of influence by anyone’s standards. The organisation has 140,000 employees worldwide and operates in 70 countries with a staggering 86 million clients.

Last year was also the first time the company’s sustainability report was fully audited, giving the document an extra level of assurance, and the insurer deeper credibility. 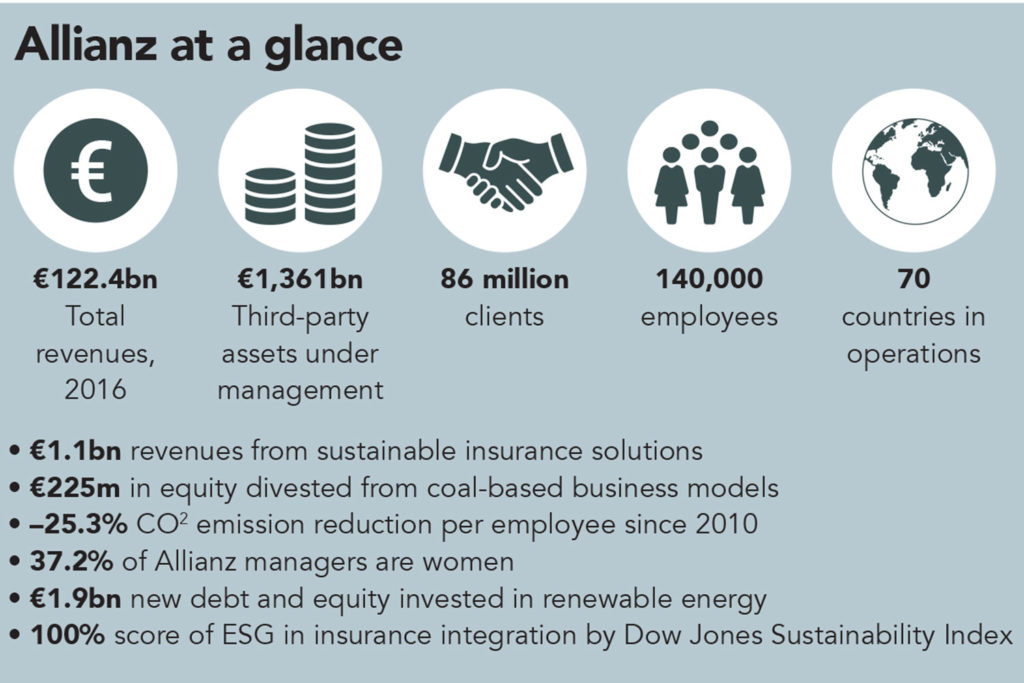 Allianz’s sustainability strategy boils down to what it calls its five pillars: to be a sustainable insurer, a responsible investor, a trusted company, an attractive employer and a committed corporate citizen.

Latif has been with the company for ten years, after joining its “ivory tower” as a climate specialist in 2007. She headed the climate advisory team until 2012 when she became head of Allianz’s ESG office, the unit supporting the company’s ESG board in its efforts to integrate environmental, social and governance practices and policies into the core business.

Latif says the company has achieved a lot and that she is “proud” of the progress. But in what may seem a brutally frank admission, she says Allianz is “probably an advanced beginner” in terms of its sustainability progress.

“We have really achieved a lot in shifting mindset [in terms of] what sustainability means and how we make it more relevant for business decisions,” says Latif. “We’ve set a good basis to be able to advance even faster in the future by having taken some smart decisions on how to integrate, and that’s why I see lots of potential to do even more in the future.”

Allianz’s pursuit of sustainability is in part driven by external factors such as the increasing importance of sustainability to society as a whole. But Latif says a bigger influence is having a leadership that believes in sustainability as an issue. This, in a small way, is driven by underlying demand from customers and staff.

“We firmly believe our employees and our clients request that we act responsibly,” says Latif. “It really is the understanding that it’s going to be beneficial for the way our employees look at our company, for how they’re motivated—they intrinsically want to be part of that journey—and how clients see that we are a company that can be trusted. It’s a bit closer to core business than just saying that society expects us to do this.”

The approach for Allianz has been to have a group ESG board made up of the heads of the organisation’s three business lines: global insurance, asset management and investment management. That way, sustainable policies are written directly into its core business policies. Each of the three business strands has its own ESG centre of excellence.

“The decision was taken to make ESG [policies] part of every business decision, to really try to integrate them into the core processes that are already happening…”

The approach has resulted in some advanced decisions. For example, ESG policies are hard-coded into the trading systems of Allianz’s investment teams. Investment opportunities for other asset classes have to be referred to internal specialists for ESG assessment. On the insurance side, ESG is written into Allianz risk standards—what Latif refers to as “Allianz law”.

“We have established a very sytematic sustainability approach,” says Latif.

“One of the deliberate decisions taken several years back on how to go about integrating sustainability was that we we would not have an ivory tower alongside our core business trying to create procedures and systems. The decision was taken to make ESG [policies] part of every business decision, to really try to integrate them into the core processes that are already happening, which are used on a day-by-day basis.”

That means sustainability being written into core risk or underwriting policies that are compulsory, and rolled out to the whole group and all its “governance layers”. Latif says this is to ensure that the company’s ESG policies are “lived  and “part of the decision-making”.

“When you look at the breadth of topics being governed, our 13 specific ESG policies might seem to not cover everything. But most of our policies… are already sensitive to ESG and have embedded ESG into what they are governing.”

That is not to say there are not difficulties. The first one Latif raises is the tricky process of writing policies from the centre that avoid conflict with local values, regulation or law in any of the 70 countries in which Allianz operates. She cites the example of nuclear power and Germany, where it is very much distrusted, and France, where it is seen as vital to energy generation.

This topic comes up early when discussing the journey Allianz is on (“it’s always a challenge to actually create a comprehensive approach that is suitable for all parts of the group”), but it becomes an explicit issue when exploring the challenges of building ESG policy for such a large organisation.

Latif says the answer is to find a balance between a minimum standard that Allianz will accept, and what works in local laws and regulation. “We have achieved the balance by defining what Allianz stands for as a company, what it means to be a responsible company, at a high level for everyone everywhere.”

“They receive a mandatory standard, their senior management have to sign off the fact that they are compliant with those mandatory standards,” she says. That is now subject to inspections by auditors, the process by which Allianz is now ensuring that policies are actually “lived”.

But as mentioned, Allianz is on a journey and Latif looks to the future and how sustainability will be more deeply embedded in company business. One particular next step she sees is how the company will “exert influence” by speaking out.

“If we think a company we’re invested in is doing great financially, but they have serious human rights issues, in whatever operations in whatever country, we cannot simply look away.”

“This is quite exciting,” she says. “If we think a company we’re invested in is doing great financially, but they have serious human rights issues, in whatever operations in whatever country, we cannot simply look away. We have to speak up or eventually we’ll have to divest from that company.”

She adds: “Many large shareholders have not been vocal in the past, apart from government pension funds, but there’s a very active role to be played here.”

Latif sees room not only for Allianz to make its mark here, but also other investors in the sector. “This is a journey I think we can take which eventually helps move more companies into taking ESG and sustainability more seriously.”

The other big step will be measuring the effects of ESG policies to make them relevant to company performance. Latif says Allianz spends a lot of time analysing other companies, but will itself have to consider becoming more transparent about the way its ESG policies are working and the effects they are having.

If the ESG impact can be measured, then they can be integrated into senior management remuneration. And that could be a game-changer.

“That is a potential way forward,” says Latif. “Obviously not so easy, but I think this would be something where we could really increase momentum in making sustainability not only part of investment decisions, or business decisions in general, but actually being able to show how much positive influence we can have.”