Lady Lynn Forester de Rothschild is committed to transforming how society sees business. The key, she says, is to take a more inclusive approach to capitalism. 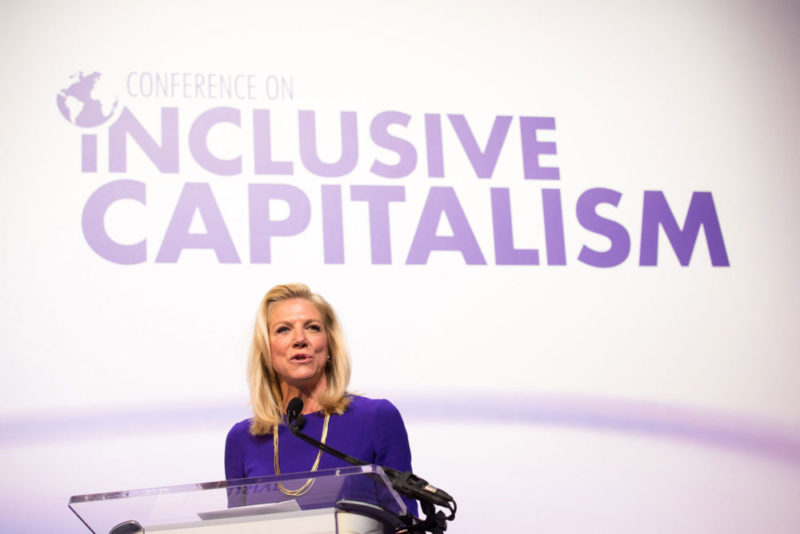 Lady Lynn, chairman of the Coalition for Inclusive Capitalism

And in that rather emphatic statement you have the philosophy underpinning the many projects currently attempting to convince investors or company boards that they should be thinking differently about capitalism.

To change the nature of business, one has to recognise that the corporation is a construct created by society.

Lady Lynn leads one of the most high-profile of those efforts. As chairman of the Coalition for Inclusive Capitalism she is campaigning to bring about a change in the nature of business so that it creates broad-based prosperity.

To do that, one has to recognise that the corporation is a construct created by society. “A huge gift,” as Lady Lynn puts it.

“And then the question is: what can society demand in return?” she adds. “Clearly, we are seeing in our politics that workers are demanding more back. People who care about the planet are demanding more. And they’re not without their rights.”

The coalition, founded in 2014, was launched in response to the issues raised in the 2008 financial crisis. Its mission is to make capitalism “more equitable, sustainable and inclusive” through “business and investment practices that extend the opportunities and benefits of our economic system to everyone.”

Lady Lynn believes, like many others, that the financial crisis revealed capitalism’s flaws. Not only that, but its “failings”, as she wrote for Time magazine in December last year, “are at the root of the social and political dysfunction gripping the world.” Wealth has been “monopolised” by the few, leading to inequality, stagnant wages and a shrinking middle class, she added.

Lady Lynn believes, like many others, that the financial crisis revealed capitalism’s flaws.

The problems had been some time brewing, according to Lady Lynn, who wrote that companies abandoned “shared prosperity” in the 1970s as they became ever more short-term focused, and as quarterly earnings became the “road to riches for chief executives, quants and investment advisors alike.”

And this is important. Lady Lynn readily points out that disparities in wealth distribution has already caused unrest—and could cause more if not addressed. For example, the Tunisian vegetable vendor who set fire to himself, and provided a catalyst for the Arab Spring, did so in the name of “economic justice”.

Her coalition has now organised three conferences to draw attention to its campaign. Headline speakers like Bank of England governor Mark Carney, IMF chief Christine Lagarde, and former US president Bill Clinton are among the senior figures from business, fund management and academia drawn together to figure out a way forward.

Give investors the tools

At the moment Lady Lynn—chair of investment company EL Rothschild and an audit committee member at The Economist—tells Board Agenda that the way forward with inclusive capitalism is to give investors tools that enable them to measure elements that do not show up on a standard balance sheet, such as the ethics underpinning brand values or a well-trained workforce.

“Right now we have an entire auditing profession around financial results,” she says. “We know what return on equity is, we know what return on capital is, return on assets, margins in operations. But how do we measure the value of a company that has a strict ethical basis so that it will never be a VW or HSBC?”

It’s a good question and Lady Lynn says the coalition—along with partners among money managers, corporates and accounting firms—is about a year away from revealing the efforts of its labours.

The measures are important because it will allow investment managers to see the results of the kind of company behaviour that produces broad-based prosperity.

A change in focus

Lady Lynn is not alone in believing business can change its focus. To support her argument, she cites statements from JP Morgan that paying employees more favourably is a value-creator, because it produces more loyalty in the workforce.

She also offers the case of American Airlines as an example, when the company offered pay increases two years early because it makes for more productive workers—though the move soon revealed how such behaviour is viewed, after Wall Street reacted badly.

Lady Lynn says Wall Street “probably made a mistake” about American Airlines, but concedes that investors are not entirely to blame.

“The best companies are those that understand their purpose, and their duty to their customers, their employees, and their communities.”

“As long as there are no credible ways to measure the value of corporate decisions that take better care of workers, Wall Street will be at a loss to do anything other than say: ‘Oh, it’s a giveaway, there goes our money to the workers instead of to the shareholders.’”

She continues: “That’s just the easy way to look at it. I think Wall Street is often too myopic, but I also think they haven’t been given credible tools.”

And those tools—measuring ethics and the value of a productive workforce—are what will help investors see, and encourage, the right kind of corporate behaviours. It also challenges investors to confront a gnarly but fundamental question for capitalists: what is the purpose of the company?

“It’s a question to which society is demanding an answer,” says Lady Lynn. “The populism, the lack of trust, the lack of optimism is all about society believing that the corporation, and the people who invest in those corporations, don’t have a purpose beyond their own self-interest.

“Society’s getting sick and tired of that, and I understand their frustration, even their anger. So, the best companies are those that understand their purpose, and their duty to their customers, their employees, and their communities. Importantly, those companies have been proven, in various studies, to be the better long-term investment. They’re also just doing the right thing.”

Pulled in all directions

Inclusive Capitalism’s focus is on investors, but that doesn’t mean company boards are without a role. Naturally, they will respond to the demands of fund managers and shareholders, but Lady Lynn sees a need for directors to take their own steps.

And this is in spite of the fact that boards are pulled in two directions: addressing the need for sustainability and meeting demands for short-term results. Lady Lynn concedes that this is a problem.

“I think the first thing necessary is leadership … But I think that directors need to ask a lot of questions about the long-term strategy and how the intangible aspects of a company are being managed to create long-term value at the employee level, at the environmental level, at the social level and certainly at the ethical level.

“Directors need to ask a lot of questions about the long-term strategy and how the intangible aspects of a company are being managed to create long-term value at the employee level, at the environmental level, at the social level and certainly at the ethical level.”

The “real” problem, she says, is when activists arrive on the scene with the view that “long term” is wasted time, and decide to buy a small percentage of stock as a route to forcing a strategic change of direction, hoping to drive up share prices. “That is a real challenge,” says Lady Lynn.

It may be one of the underlying reasons why Lady Lynn believes the UK is ahead of the US in its thinking about the role of companies and capital. Or it could be that investment managers in Britain subscribed early to the kind of ideas she’s been pursuing.

Lady Lynn also sees progress in the way the current government has been thinking about corporate governance. “I know the UK is well ahead of the United States on these issues,” she says. “It’s also why we are focusing on the US.

“I have enough confidence in the leadership of Vanguard, Fidelity, BlackRock, JP Morgan and State Street to believe that they are going to figure this out; and once they figure it out the huge battleship called the capital markets will turn more quickly.”

Schroders, Legal & General and Aviva are among the organisations that Lady Lynn says are already practising “inclusive capitalism”.

Theresa May’s government is also on the right track, she says. “The UK government, obviously distracted now [this interview was conducted during the UK general election campaign], is on to some very good thinking. I don’t think they’ve figured out how to make it regulation or law, but they’re definitely thinking in the right way.”

Lady Lynn’s coalition is not alone in its objectives. The International Integrated Reporting Council (IIRC) pursues a similar agenda, while the G20’s task force on climate change disclosures is also working on similar themes.

There are other organisations too, and perhaps one problem for investors and corporates alike is deciding who to listen to. Surely a single voice or project would make things easier to win buy-in.

Lady Lynn refers to this as the “elephant in the room” and admits that the corporate world needs a single umbrella body pulling all the current thinking together. She believes thinking on business and companies is coalescing around the term “inclusive”, and a single body pursuing that aim would be “serving society much better”.

Action at government level would also make things much easier, not least because of the fiduciary duties that are written into law. It is widely believed that fiduciary responsibilities only go as far as shareholders, and do not extend to interests such as employees, suppliers, the environment or communities.

“We’re not political,” says Lady Lynn, “but there are laws and regulations that could help move the bar. And I think that Theresa May’s government is thinking about it as well.”

She concludes by revealing her optimism that inclusive capitalism will succeed and head off potential unrest. “That’s what keeps me going,” she says.