The UK’s “comply or explain” governance code is widely hailed as a success, but the quality of explanations is open to question. Philip J. Shrives leads us on a tour of the problems. 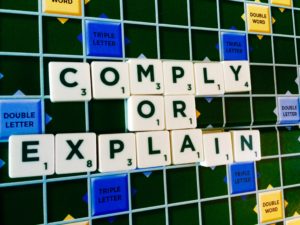 A Bank of England report in the late 1980s examined the possibility that the UK’s corporate governance was not quite as strong as countries such as Germany or Japan.

As a result, the Cadbury Committee was formed and its subsequent report, produced 23 years ago, has had a profound influence on corporate governance (and indeed other systems) throughout the world.

A key aspect of this report was the celebrated “comply or explain” system. Based on the idea that “one size did not (necessarily) fit all”, the system allowed companies not to comply with the governance code provided they gave an explanation. The content or format of this explanation was unspecified.

Cracks in the code?

Provided companies enter into the spirit of good governance and either honestly comply or, alternatively, provide an explanation that demonstrates that they have a governance system of equivalent quality to compliance, then the system works well.

However, this is where we begin to see some potential cracks in the guidance. This does not mean that we need a new model—far from it. Rather we need to repair these cracks before they undermine what is, in theory and often in practice, a very good system.

This short article explores some of those improvements, and nudges stakeholders to speak up and “shine a light” on occasional imperfections. If those imperfections are not addressed then the whole system could begin to crumble.

A key issue is the quality of the explanations. I have been examining explanations since 2004 and although some have improved following discussion documents issued by the Financial Reporting Council (FRC), there is still work to be done.

In 2009 the FRC called for comments on the application of “comply or explain” and I raised a number of issues concerning explanations, many of which remain today.

One of these concerned the location of explanations. Many companies have clear non-compliance statements or, even better, tables at the start or end of their corporate governance reports.

For other companies, they claim compliance “except as stated below”. The reader then has to read through the report trying to work out if something is an explanation or not. Even for an expert it can be difficult to distinguish between explanations for non-compliance, and discussions of compliance. Playing corporate governance Cluedo is not much fun.

Non-executives (especially those on the audit committee) need to review the explanations and to ensure they are as good and as clear as they can be.

Another issue concerns the completeness of explanations. Explanations usually state what the non-compliance is, but they do not always provide an explanation as to why it occurred.

A common statement is that the non-compliance was fixed by the end of the year. Sometimes that is fine, if it is to cover an unexpected event, but other times it indicates a lack of succession planning.

Even worse, companies often do not even provide the code reference (e.g. A.3.2), so it can be confusing to ascertain which specific items are not being complied with.

Sometimes a number of items are fused together so it can be difficult for the reader to be sure about which, and how many, non-compliances are being disclosed.

Related to that is the readability of some compliance statements with long sentences and sometimes double negatives. A simple table with the non-compliance item, the code reference and a bespoke explanation that is specific to the company, is surely clearer for the reader.

Non-executives (especially those on the audit committee) need to review the explanations and to ensure they are as good and as clear as they can be.

Is Explain more important than Comply?

In 2012 the FRC produced a document celebrating 20 years since the Cadbury report. It contains a number of excellent essays and many of these raise questions about the adequacy of explanations.

Most recent FRC reports also emphasise that compliance with the code is increasing. It may be that some companies feel that there is pressure to comply and that by providing an explanation they will only open up themselves to criticism.

This is a great shame because in many ways, “explain” is so much more important than “comply”. Companies that have considered the code and decided that they want to take a different approach to governance should be celebrated, and they should be encouraged to write a full explanation.

It appears that succession planning, often an issue in family businesses, is also a problem with some FTSE 350 companies.

But one of the problems is that sometimes there is no good explanation. For example, suppose a company has failed to recruit a new non-executive when an existing one ceases to be independent.

It appears that succession planning, often an issue in family businesses, is also a problem with some FTSE 350 companies. In that case companies just have to be honest about what has happened. At least it will be out in the open and may be an area that in which they can work towards compliance.

Other areas may be such that the company does not wish to comply and, where they have a good reason, they should not feel pressured into complying at some point in the future. Not every non-compliance has to be converted into compliance—that is the basis of the flexibility the code offers.

The comply or explain system also raises many other questions which cannot be answered here.

Should all items in the code be subject to comply or explain, or are some critical items such that we would expect every FTSE 350 company to comply with (for example, a chief executive not going on to be the chair or avoiding role duality)?

Should shareholders question explanations more, or do they see the code as “comply or perform”?

Should auditors do more work on compliance rather than the current seemingly boilerplate audit statement on the code, whereby just nine provisions are examined?

To what extent should auditors be involved in the crafting (or perhaps even auditing) of explanations?

And what of the FRC? Are they prepared to question companies that either falsely claim compliance or provide inadequate explanations? These questions, for the moment at least, remain unanswered.

Philip J. Shrives is professor of accounting and corporate governance in the faculty of business and law, Northumbria University.

(The) Financial Reporting Council (2012). What constitutes an explanation under ‘Comply or Explain?’ London: FRC.