Our latest podcast features John Allan, one of the UK’s top corporate leaders, on NEDs’ responsibilities and priorities in a crisis. 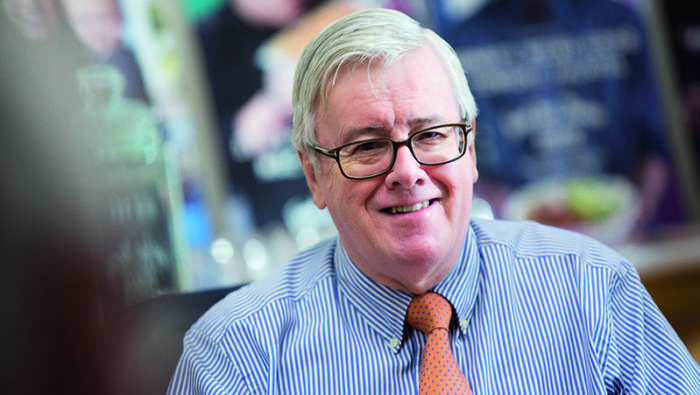 Tesco’s chair John Allan sees some good coming out of the pandemic. Despite the appalling tragedy playing out around the country and the world, Covid-19 has propelled big corporates to think and act much more in the interests of their stakeholders.

Surveys, consultants, academics and observers have been saying this for months. But it is illuminating to hear it from someone working at the heart of an organisation negotiating the crisis—not least one as high profile and as central to British everyday life as Tesco. The pandemic, he says, is making it easier for companies to turn their attention away from a laser aim only on profits.

“Funnily enough, I think it’s getting easier. I remember as a young chief executive being attacked very aggressively by a large shareholder because the company I was CEO of had given a little bit of money to charity. And I remember the investor concerned saying, and these are his precise words, I’ll never forget: ‘Look sunshine, when we decide to give money to charity, we’ll let you know’.”

“This whole issue of companies having clear accountability to stakeholders, a clear sense of purpose, has been accelerated by Covid”

Allan says it’s  “inconceivable” that such a conversation would take place now; the investing world has moved on to a view that companies should be good at “understanding and responding” to the needs of all stakeholders. That’s come in response to the Financial Crisis of 2008, but also the climate crisis. Covid-19 has fuelled the trend.

The comments are in tune with those Allan recently made at the The Times CEO Summit, in which he worried about the government’s “levelling up” policy and whether it is working. He called on Downing Street to focus on what happens after the pandemic is over, and on reducing inequalities, if it wants levelling up to succeed.

He tells Board Agenda the pandemic has served to concentrate corporate minds of their social purpose.

“This whole issue of companies having clear accountability to stakeholders, a clear sense of purpose, has been accelerated by Covid.

“Something that might have taken two or three years, has probably happened in six months, in terms of people moving on with that agenda. There are clearly many downsides that have come out of the Covid crisis; this will be one of the pluses.”

Allan has served five years as Tesco chair after a period leading the board at Dixon Retail until it was merged with Carphone Warehouse. He was chief executive of Exel, the logistics company, before it was taken over by Deutsche Post and has served as a non-executive on the boards of brands like Royal Mail, 3i, Hamleys and National Grid.

This year Allan won The Sunday Times NED of the Year Award for a non-exec at a FTSE 100 firm. His experience gives Allan an in-depth perspective on what’s happening in UK plcs and the development of boards in recent years.

Currently, they are coping with the pandemic, Brexit, a good deal of geopolitical uncertainty and increasing protectionism. The result is a hazy view of the future for boardroom decision-makers.

“It’s incredibly hard to predict and therefore the only way boards can respond is to say: ‘Let’s look at a series of different scenarios and ensure that we’ve got a robust, resilient plan for every single one of them’.”

That gives non-executives an important role in seeing their companies through the pandemic and all the other crises currently gusting about the world.

“The way it works in most boards,” Allan says, “is that management will… be looking at a series of different options. The role of the non-executives is to challenge, to understand the implications; to test, really, whether management have thought about enough possible scenarios. Is their worst scenario the worst it really could be, or is there an even worse case than the one they’ve developed?

“And then, to help them [management] in developing a response to these different scenarios. Scenarios are fine, but what really matters is what you do about it as a result. Experienced non-executives can make a really valuable contribution to thinking about how to deal with the different situations people envisage.”

He sees a number of questions that should be front of mind for non-execs at this time—questions that emerged from a previous crisis. But there is one, he says, that often receives scant attention despite its centrality to corporate survival prospects.

“Those of us who were around in the financial crisis learned very painfully from what went on then that cash really matters; the strength of the balance sheet matters.

“Financial facilities that you may have taken for granted can be withdrawn suddenly. Therefore, ensuring that you really understand how to keep good sources of finance, if you have them, or where to find them if you haven’t, is really important,” Allan says.

“That’s something that management sometimes overlooks. In their desire to find the right consumer strategies, the right operating plans for the business, perhaps to focus less attention on the financeability of the plan. Non-execs can be very helpful there.”

Having the right skills on boards helps too. Sustainability and digital are core areas to have covered with non-executive expertise, as is understanding customers.

“One of the jobs that the chairman is to really build a board that has the necessary skills embedded within it.

“So, if I take some examples, it’s clearly important to have on the board people who are committed to, and knowledgeable about, the likely implications of moving towards greater environmental sustainability, because I think that’s going to be an issue for every business in the world.

“Digital technology: we’ve seen how quickly things can change there.

Skills come from elsewhere other than practical experience and training, such as diversity, says Allan. It’s not just the right thing to do, he adds, but also brings essential competencies to the boardroom, especially when non-executives need to challenge management.

“One of the reasons why I’m a great fan of having really good female executives on the board is, I think, women often have better developed skills in this space than their male counterparts and can add considerably to the quality of debate that goes on. They can be quite searching without being aggressive.”

He adds: “There are all sorts of reasons for more diverse boards. And most people have got the message and are working on that. But I’m absolutely convinced, from my experience, that more diverse boards work better than boards that are kind of mono-cultural, mono-gender, mono-racial or whatever.”

And would he encourage people to enter The Sunday Times NED Awards? He would.

“Don’t feel that you’ve got to have a kind of superstar non-executive before you can nominate them. I was lucky enough to be nominated and get an award last year, and I’m anything but a superstar.”

The awards, he says, encourage management to think deeply about the role and benefits of good non-execs.

“Non-executives tend to be very conscious of the contribution made by executives. We don’t ever forget that. But sometimes it’s a little bit harder for people to look the other way and see that their non-executives are actually making a very substantial contribution.”

Visit The Sunday Times NED Awards for more information about the awards and how to nominate.

Listen to the full interview on the Board Agenda podcast.