One of the fastest-growing businesses in the UK, Gymshark has become a cult brand with young keep-fit enthusiasts. CEO Steve Hewitt reveals how the company’s growth has been a “fairytale”. 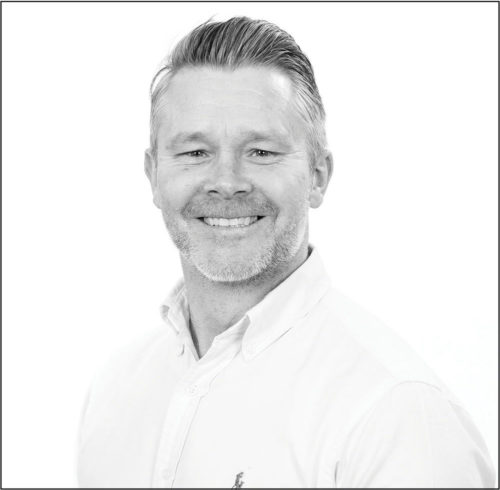 Every Monday morning, Steve Hewitt takes a stroll around Gymshark’s HQ, or GSHQ, as he nicknames the fitness brand’s sparkling new offices in Solihull.

Chief executive Hewitt takes about two hours chatting to the 200 or so staff to find out how they are doing, and make sure they are happy. With him on the tour is David Parry, his chief people officer.

“I want staff to feel on a Sunday night like it’s Christmas Eve, that they are looking forward to the next day.”

“I want staff to feel on a Sunday night like it’s Christmas Eve, that they are looking forward to the next day,” he says. “I don’t want anyone coming to work on Monday, thinking ‘I hate my life. That we will soon be introducing a strict ‘no holiday policy’.”

Then he stops himself, and laughs: “What I mean to say is that no one is allowed not to take their holidays.”

Yet working at GSHQ sounds like Christmas all year. All the staff working in the new 42,000-square-foot office space have their own gym, cinema, TRX (suspension weight training) and yoga studios as well as treatment centres to use.

But don’t be fooled. Gymshark is as sharp-nosed as its name suggests. The young fitness brand is fast becoming one of the best-known sports retailing companies in the world, and said to be the UK’s fastest-growing young company. Here’s the story, or should one say, fairytale.

Gymshark was created in a Birmingham garage just six years ago by teenager Ben Francis and a group of his school friends. Francis worked out in a local gym, but didn’t like the sports clothes he found on the high street or indeed online. They were neither athletic nor sleek enough for the sort of body-building workouts he was doing.

Last year the business turned over sales of £42m, and this year sales are forecast to be an astonishing £100m.

So Francis bought a sewing machine, and with the help of his grandmother, taught himself how to sew but also how to screen-print designs. Crucially, he used elastane in the garments to give them more figure-hugging elasticity and shape.

Going on to study at Aston University (one of the rooms at GSHQ was named Aston) Francis continued building up the business. Friends designed the website—Francis came up with the distinctive Gymshark logo—and they soon found that people loved their clothes as much as they did.

By now, Francis was triple-tasking. As well as studying and working at Gymshark, he worked long hours delivering pizzas for Pizza Hut to fund the enterprise. It was a wise decision.

In year one, Gymshark turned over £500,000. He soon found that Americans loved his clothing range, which was unashamedly marketed through every social media channel from YouTube to Instagram. He was smart too, sending free clothing to well-known athletes, including body-builders such as Lex Griffin and Nikki Blackketter, who became brand ambassadors.

Word spread rapidly around the fitness world from body-building to football. Sales soared. By the second year, the 20-year-old Francis went by himself to the Far East to find manufacturers that were able to provide him with the volume of clothes he needed, so strong was demand for his products. He also left university early to focus on growing the brand.

“Being part of a social community is intrinsic to Gymshark’s brand appeal for the young.”

Today Gymshark has 800,000 active customers in 131 countries, and manufactures its own garments around the world. The brand now operates 11 international online stores and is aiming for 25 by 2020.

Over those six years, the brand has attracted an almost cultish devotion. Around 5.2 million youngsters follow its every twist and turn on social media channels. Even the design and fitting-out of the new GSHQ building had a prime-time slot on the internet as Francis filmed it for his followers to see on YouTube.

“Being part of a social community is intrinsic to Gymshark’s brand appeal for the young,” explains Hewitt.

So too is being part of the local community, and Gymshark works closely with the LoveBrum charity for homeless people, as well as with other Birmingham charities.

Hewitt came on board two years ago to run Gymshark, whose growth has been nothing short of phenomenal. Last year the business turned over sales of £42m, and this year sales are forecast to be an astonishing £100m. Its sportswear is bought by customers from Europe to Japan and Australia. Hewitt reckons he will be employing another couple of hundred people over the next 18 months to cope with future demand.

“Ben was very smart,” Hewitt says. “He knew exactly what he wanted—to create a brand like the US UnderArmour clothing. Something to show off in, but practical too.”

“Growth…always comes down to people. That’s why making sure that staff can cope with the pace is a priority.”

But Francis also acknowledged that he needed professional help to grow the business further. Lady Luck came to the rescue. Francis met Paul Richardson, a local businessman who had been on the board of Birmingham City football club.

Richardson and Francis hit it off immediately. Richardson went on to invest in the business, and is now chief strategic officer. He introduced Francis to Hewitt, who was working for Sandee Worldwide sportswear, a Midlands-based sportswear brand, having worked for rivals TigerTurf and Reebok, where he headed up the commercial division for EMEA. 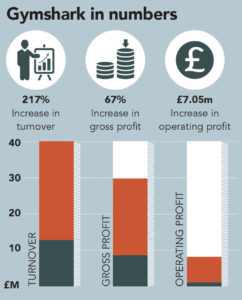 When asked if managing such rapid growth must bring its own challenges, Hewitt replies: “Growth is fantastic but it can also be a real pain. It always comes down to people. That’s why making sure that staff can cope with the pace is a priority.”

One of the biggest challenges is ensuring that production in the Far East and Europe is of the highest quality and on time. They recently set up a sourcing hub in Hong Kong to ensure the flow of orders. He gives the example of a recent huge order they placed for 50,000 units of new product ranges.

“That was quite a risk. But we use our customer insights team crunching data to inform our forecasts.” Hewitt has been careful about getting the right balance for Gymshark’s board structure to ensure a good dynamic between youth and experience, and making sure that everyone plays to their strengths. Ben Francis, for example, is now chief brand officer, concentrating on the social media and brand awareness side of the business.

So far, the business has been entirely self-funded, and Francis is still the majority shareholder. But what’s next? Any ambitions to head for the stock market?

Hewitt says there are no plans to float for now: “Our legacy will not be the bank balance. It will be more meaningful than that.”