Dr Hans-Christoph Hirt, outspoken head of Hermes EOS, isn’t afraid to push the boundaries in the name of good governance and sustainability. 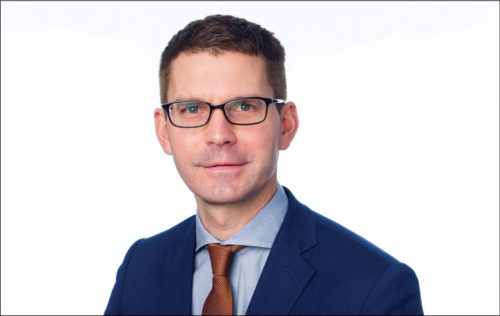 Asked to assess how companies are performing against his stewardship priorities for 2018, Dr Hans-Christoph Hirt notes the progress of key issues across the world. As head of asset manager Hermes EOS, he takes a global view, and in that view things are progressing.

To illustrate the point he tells an anecdote about a colleague who recently attended the AGM of the giant Taiwanese group Hon Hai Foxconn, employer of 1.2 million people. The colleague challenged the company on having a chief executive that is also chairman, as well as the subjects of human capital management and labour practices.

Perhaps to the surprise and disappointment of many business interests, Hirt argued for employee directors on boards as part of the recent review of the UK’s corporate governance code.

The remarkable thing about this intervention, according to Hirt, is that it illustrates how investors, or asset managers, are now taking key issues to boards around the world. “It’s an amazing example,” says Hirt, who adds: “The positive thing is that more investors are bringing these issues to the attention of boards.”

And that is probably why Hirt is also one of the most quoted governance commentators around. If the Financial Times runs a piece on governance there’s a good chance Hirt’s forthright views will be included. He is a sought-after conference speaker and has been with Hermes EOS, which acts on behalf of stewardship-only clients, for 14 years. His blog is a must-read for those wanting to understand the governance concerns of asset managers and takes an emphatically independent line.

Perhaps to the surprise and disappointment of many business interests, Hirt argued for employee directors on boards as part of the recent review of the UK’s corporate governance code. He wrote: “The representation of employees on company boards is common practice throughout Europe. We believe that the UK can learn some lessons on this from other markets while maintaining its unitary board system and wider corporate governance framework.”

When replying to the recent consultation on the UK’s stewardship code Hirt advocated a switch from a “comply-or-explain” approach to an “apply-and-explain” philosophy that would impose “clearer stewardship expectations on the investment chain.” Once again, pushing boundaries.

When Hirt wrote on the engagement themes for Hermes in 2018, he spelled out a manifesto that leaves the reader in no doubt about the issues companies should be addressing. They are: reporting on climate change risk using guidance from the G20’s Task Force on Climate-related Financial Disclosures (TCFD); extending demands for diversity in the boardroom beyond gender and widening engagement to include management below the board; advocating for one-share-one-vote; pushing for changes in executive pay policies; backing the UN’s Sustainable Development Goals (SDGs); and supporting the launch of stewardship codes around the world.

Our conversation really begins with climate change, the global issue hanging over society, governments and big business. Hirt says the situation is one of improving awareness but also a “readiness” to talk about climate change exposure, risk, opportunities, improved reporting and planning. “The much better companies are planning ahead and mapping out a different business strategy/business model,” he says.

For Hirt the issue is one of changing the approach to reporting. “We expect more and we want to have a higher quality dialogue [with companies] and we expect disclosure in line with the TCFD,” he says.

But Hirt also notes the level at which discussion is taking place. “It’s a topic that’s now generally part of AGM discussion and board-level discussions, not discussions between experts or sustainability-focused panels,” he adds.

It’s not a great leap from climate to the Sustainable Development Goals, the core element in the UN’s 2030 Agenda to tackle 17 key issues such as social justice, the environment and global warming, poverty and others. Hirt says Hermes was pretty much aligned with the SDGs anyway, but they help refine the dialogue between companies and investors. The “SDGs give a common language for companies and investors,” where once they would have discussed “sustainability” or “corporate social responsibility”.

He adds: “The very positive thing about the SDGs is that you have a global target, and all the players in the chain, including the companies, now need to look at what they can contribute to achieving the SDGs. This takes companies a little bit out of their comfort zone.”

Indeed, Hirt believes that the usual business planning for the medium and long term all becomes much more of a challenge for companies if they also integrate the SDGs. “I think it’s very positive…very influential in terms of thinking and the focus on specific issues,” he says.

What the SDGs also achieve, according to Hirt, is urging company leaders towards a greater focus on the “long term”, the phrase that has, over the past couple of years, become the buzzword central to governance. Some may feel there remains a tension between, on the one hand, a push among regulators, politicians and NGOs for companies to work toward long-term aims; and, on the other, a demand to produce short-term result for investors.

However, Hirt sees a way to harmonise the two competing demands. “There may be conflict, and that’s why it’s so important to be clear about the long-term plan, the corporate purpose…to be able to explain decisions that sacrifice short-term profit.”

Expenditure on research and development is a good example, Hirt explains. “If you’re clear as a company what it is you want to achieve, where you are going, what are the challenges, then that should be able to explain the trade-off sometimes made between, let’s say, paying all the profits out as dividends relative to reinvesting in research and development.”

That takes the conversation into the realm of how investors behave more “long term”. This discussion has been around for some time. Some, including Liberal Democrats leader Vince Cable, have advocated enhanced voting rights for shareholders that designate their shareholder as “stewardship” stock to be held for the long term. Ideas such as that have been kicked around as a way of persuading shareholders to play a greater role in running companies.

“There’s definitely an emerging body of research now very clearly saying engagement is not just a ‘nice to have’, but actually impacts risk and return.”

Hirt sees problems with this kind of approach in that it could produce “unintended consequences”. Good ideas, he says, with application perhaps in some cases. For Hermes, however, they are unnecessary.

“I believe we can do this without any extra incentives that may have unintended consequences.”

Which demonstrates a lot of faith in Hermes, if not investors as a whole, and their ability to do the right thing. That said, Hirt is not blind to the fact that some companies and their investors could be doing more. In comments about the state of stewardship he says there are many that could be trying harder and that the European Union’s Shareholder Rights Directive could play an important role in encouraging better stewardship.

“If you are in Asia and Hong Kong or Taiwan, or probably even Germany, you would think OK, in the UK there’s a model that is working and stewardship is well-established and well done,” he says. “But then you look…there are still companies where investors could, and probably should, have done much more.

Hirt even expresses “surprise” that so many investors were designated as “tier one”, the highest ranking for stewardship by the Financial Reporting Council. The top group is “too large” says Hirt. He says it will be interesting to see the effect of the Shareholder Rights Directive due to be implemented by the middle of 2019 across EU states.

“We think this may give another positive impetus on the stewardship journey, certainly in Europe,” says Hirt. He says the block among many fund managers may be demonstrating that engagement “affects the risk and return” profile of companies because it is expensive, requiring a highly trained team. However, he says the evidence is beginning to demonstrate that engagement works.

“There’s definitely an emerging body of research now very clearly saying engagement is not just a ‘nice to have’, but actually impacts risk and return. It’s relatively new research, but it’s very helpful, I think, for more to recognise that this is not a cost centre but, ultimately, helps the outcomes for beneficiaries.”

And what of the future of stewardship? What can companies expect from the fund managers who buy and sell their shares? Passive investors are building engagement teams, quite separate from their investment teams, warns Hirt, while smaller houses like Hermes with intensive engagement models will grow “because asset owners will recognise it’s difficult to do this alone”.

But he also sees engagement increasingly focused on fundamentals, what Hirt calls the “starting point”, asking companies about the purpose of the organisation, who the key stakeholders are and what the long-term strategy is.

Questions like those, according to Hirt, drive “passion topics” such as climate change, board composition and executive pay. “Engagement,” warns Hirt, “will get more sophisticated.”