UK PM tells leaders at World Economic Forum that reforming governance and ensuring big business stands by its responsibilities to communities is central to Britain’s economy retaining a global outlook. 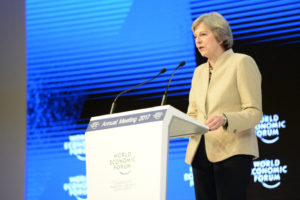 Theresa May in Davos

Prime minister Theresa May yesterday placed reform of corporate governance at the centre of her argument that the UK will retain a “global” outlook on the economy and trade, despite withdrawing from the European Union.

Speaking before leaders at the World Economic Forum in Davos, May said there was an “underlying feeling” that global business is playing by a different set of rules.

Her comments reiterated earlier statements that governance reform was at the centre of combating inequality, and would be an answer to the belief that globalisation has failed to deliver benefits for many in British society.

She added that she wanted to deliver “yet higher standards of governance”.

“It means businesses paying their fair share of tax, recognising their obligations and duties to their employees and supply chains, and trading in the right way; companies genuinely investing in—and becoming part of—the communities and nations in which they operate, and abiding by the responsibilities that implies; and all of us taking steps towards addressing executive pay and accountability to shareholders.”

She also urged business to ditch short-term strategies, …”putting aside short-term considerations and investing in people and communities for the long-term.”

May signalled that the UK is preparing to launch a new industrial strategy, which is expected to be revealed in a discussion document within the next week.

Her Davos speech came just days after a speech in which she indicated the UK would seek to withdraw from the European single market, a position which attracted a raft of statements from EU leaders that the UK could not expect to be in an equal or better position outside the EU.

The Financial Times commented that May’s Davos speech was heard in silence and received a “short round of polite applause”.