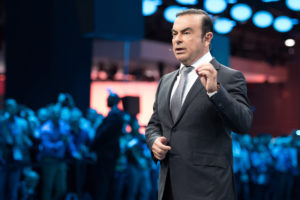 Mitsubishi has taken a significant step towards the consolidation of power with the appointment of Carlos Ghosn as chairman.

Ghosn is already chairman and chief executive of Nissan and Renault. His appointment follows Nissan’s acquisition of a $2.3bn stake in Mitsubishi in October.

Ghosn joins three other Nissan-appointed executives on the Mitsubishi board.

Bloomberg quotes Ghosn speaking at an extraordinary shareholders’ meeting: “I know you will have interrogations about whether this enlarged alliance will work. From past experience, I am confident that it will.”

Ghosn’s appointment was described by Bloomberg as the latest step in creating a three-way alliance producing ten million vehicles a year.

In May, Ghosn’s pay package from Renault prompted French president Francois Hollande to threaten the introduction of binding votes on executive pay.