A global survey of directors reveals courage to be the most valued quality in the boardroom. But is it put into practice? 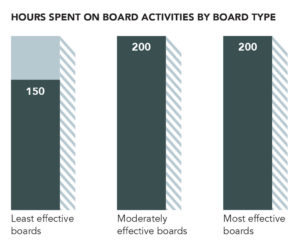 Hours spent on board activities on board type. Source: Russell Reynolds.

“Courage” is the most highly ranked element in boardroom behaviour, according to new research from headhunting firm Russell Reynolds Associates.

After questioning board directors around the world for its 2016 Global Board Culture Survey, Understanding the Behaviors that Drive Board Effectiveness, the firm ranked a list of the most important behaviours. The “…courage to do the right things for the right reasons” came out on top.

Russell Reynolds, which questioned 369 directors from large public companies in a dozen countries, said: “Our study uncovered a surprising degree of consistency in the behaviours that directors believe are most critical for an effective board.”

The firm draws two conclusions. First: directors should not focus on the traits expected in any one particular country, but work on the five top qualities almost as a set of universal values. This is because when Russell Reynolds questioned directors who worked on boards both in their home country and abroad, the ranking of the top behaviours remained the same. 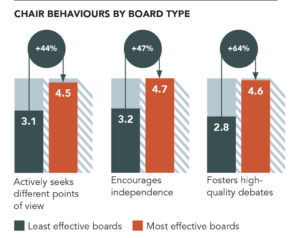 Second, the consistency of behaviours could be taken as evidence that the “board-centric” model of governance—one that heavily emphasises independence and a board’s ability to challenge management—has been widely adopted. This model, Russell Reynolds said, is the one pushed by large institutional investors.

There is support for this view, though it is qualified. Oliver Parry, head of corporate governance at the Institute of Directors, argues that non-executives willing to address difficult subjects are a necessity.

“In this new world order we face in corporate governance…we need to think about [non-executive directors’] ability to constructively challenge the CEO,” Parry said.

But he added that headhunters have a role in improving boards by moving away from lists of the “great and the good” when commissioned to find new board members. That includes ensuring boards are diverse, not only in gender, but in background, age and ethnicity.

When the research focused on what made for effective boards it drew three observations: a chair who is an effective facilitator; strong relationships with senior management; and a long-term horizon for strategic decision-making.

There is much agreement that boardroom members value independence and the capacity to challenge management, but some believe there is little challenge going on in practice.

Andrew Kakabadse, a professor of governance and leadership at Henley Business School, said research has consistently shown that boards fail to confront problems. 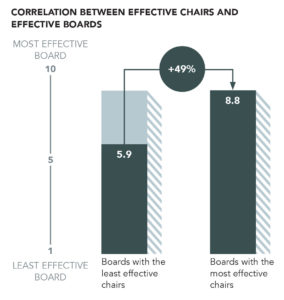 He said past research revealed that boards “knew what they should challenge, but they didn’t. So they went back to operational issues with a tick-box mentality”.

He added: “We found the same phenomenon in every part of the world.”

Professor Kakabadse said that “stewardship”, or the ability to facilitate a non-confrontational conversation involving challenge, is missing from many boardrooms. He said that many boards have also become preoccupied with “monitoring”.

Meanwhile, Rae Sedel, a member of the Russell Reynolds board of directors, stressed that boards have gone through a transformation.

“It’s significantly changed over the last 15 to 20 years,” she said, adding that boards were now more involved in questioning and debating issues. “There is a desire for boards to contribute, and board members want to contribute,” she added.

She said that board behaviour in continental Europe, the US and the UK had all gone through change. “What’s helped the UK is having independent chairmen—really properly defined chairmen roles. And definitions of independence have helped.

“Those two things have led to boards wanting and expecting to have more expertise on their boards.”

Sedel conceded that search firms could do more to offer candidates with more diverse backgrounds. But she added that boards often demand niche skills and diversity in the same recruit, a request difficult to fulfil because of a dearth of suitable candidates.

“Building the board is a long-term activity, not a one-shot deal,” she said. “We have influence but we don’t control.”