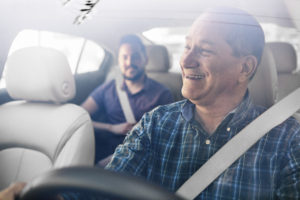 An Uber driver and his passenger. Photo: Uber

A first-instance employment tribunal in London has found that Uber drivers have worker status, and are not self-employed, as claimed by Uber.

Worker status does not grant full employee rights to shared or gig economy service providers, but does give individuals the right to 5.6 weeks’ paid holiday per year, and the right to the national minimum wage.

According to Royal London, the ruling—if confirmed—could end up costing Uber £3m per year, which will rise to around £12m per year by 2019–2020 as the living wage rate increases and as employers are asked to put more money into workplace pensions.