Paul Randolph, barrister, professional mediator and expert in the psychological traits of conflict, examines the mindset of those who become entrenched in damaging boardroom disputes, and offers his expert tips on how to resolve matters quickly. 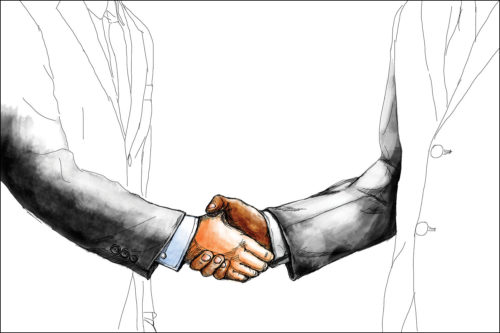 Conflict drains all those involved of three valuable commodities: time, energy, and money. It destroys morale, efficiency and productivity, and in turn, can devastate not only the commercial and professional interests of the people caught up in it, but also their health and family life.

Why are such disputes not resolved swiftly, reasonably, sensibly and amicably? What strategies can parties adopt to resolve difficult conflict situations?

The recent hostile vendetta between José Mourinho and Paul Pogba at Manchester United Football Club will have created considerable negativity and was patently draining for the entire organisation.

The dispute reached its lowest point when the media published reports of a bitter exchange at the training ground. The publicity surrounding the player’s poor relationship with his manager showed that he was ripe for a transfer, resulting in greater unease and uncertainty for the entire club.

Can we avoid such conflicts in the boardroom? The short answer is no.

Elon Musk will have endured many bitter arguments with Tesla’s board of directors before finally submitting to a crushing settlement with the Securities and Exchange Commission (SEC) over fraud charges. Prior to the SEC suit, portfolio manager Aeisha Mastagni told Forbes that Tesla’s board was “not sufficiently independent to properly oversee Elon…the board is rife with conflicts, including Elon’s brother Kimbal Musk, who didn’t take his role as a board member seriously enough to attend at least 75% of the meetings.”

Fortunately, Musk seems to have had good experiences with mediation: his two previous and costly divorce suits were dealt with through mediation and, in 2014, mediation resolved his dispute with the United Launch Alliance (ULA), enabling SpaceX to move into the highly profitable spy-satellite business. These experiences may have influenced his decision to enter into settlement negotiations with the SEC rather than jump directly to litigation.

In relation to the recent Pret a Manger debacle, one might wish to have been a fly on the wall to witness the differing perspectives that were bitterly and fiercely expressed at board meetings over how to face the public regarding allegations of product-associated allergy deaths.

Events such as these can leave us asking big questions. Why do individuals and organisations behave so irrationally when embroiled in a conflict that can result in lengthy, costly and destructive tribunal litigation? What is it that makes so many executives and professionals destroy their daily working environment through vitriolic disputes, often reducing them to childlike and senseless behaviour in the boardroom?

Why do directors, trustees and other senior executives so readily allow themselves to deviate into public spats which can have a devastating effect upon an organisation’s market position and share value?

Can we avoid such conflicts in the boardroom? The short answer is no. Conflict is an integral part of all human interaction, whether it be in the business environment, domestically or internationally.

However, all disputes have a common thread: Somebody wants something and another is not willing to give it. The reasons for wanting will be partly rational and partly emotional. The rational part could be: “I need my opinion to be accepted because it is the only good way forward for the company.” The emotional element is: “You never listen to my opinion or show any respect for my views.”

Similarly, the refusal may be rational: “Your idea would simply not work economically,” accompanied by the underlying and probably unspoken emotional: “We do not see why we should always have to give in to your unreasonable demands.”

Despite this there are many positive aspects of conflict and if we can learn to work within its confines it is possible to manage it more effectively and productively. Disputes can, for example, act as a necessary precursor to change. Without conflict, organisations are liable to stagnate and become devoid of transformation or the prospects for innovation.

The problem with boardroom disputes, as with most other conflicts, is that emotions frequently tend to overwhelm reason. Board members will have been driven into disputes by a myriad of psychological and emotional drivers, which invariably cloud their judgement and make it impossible for them to see things rationally.

Without conflict, organisations are liable to stagnate and become devoid of transformation or the prospects for innovation.

Members of the board can be left scratching their heads in bewilderment at the childlike antics of a fellow member, often hoping that common sense will prevail. It rarely does. Each board member fervently believes that they are completely in the right, and the other is wholly in the wrong.

Further to this, each will have a tendency to believe that they are the only normal, rational and logical person in the room. An aggravating feature to such disputes is the perception that individuals “are not being heard” or that “no one is listening.” This heightens anger and frustration, and can prolong disputes.

In the boardroom, members constantly strive for recognition, respect and endorsement. If a loss of this is associated with an injustice, then a board member’s self-esteem and desire for approval is perceived as being directly under attack.

To help defuse this anger and resolve the dispute it is necessary to do two things:

1. Ensure that the disputing member feels heard. This means more than just nodding and saying, “Yes we do understand your point”, and then quickly moving on. There is little more infuriating than to feel that one’s point of view has been ignored and summarily dismissed.

2. Look for and explore the perceived loss along with any injustice that might be lurking in the background. Once these are fully acknowledged—and if possible, addressed—the anger is dissipated and the complainant can feel properly heard.

The value of apology

Any form of criticism, rebuke, condemnation or rejection will affect a board member’s self-esteem: all executives have an aversion to disapproval, as it infers a loss of respect and deference. It will therefore invariably result in an emotional and defensive response.

This is why an apology, or an admission of liability, is so problematic for many leaders and executives. It involves an element of self-condemnation and an admission of fault. The word “sorry” is the quickest, cheapest and most effective means of resolving a dispute, but it is rarely used when it is most needed.

• The CEO of Thomas Cook refused to apologise for the deaths of two children from carbon monoxide poisoning while they were on holiday in Corfu. Giving evidence at the inquest, the CEO stated “I feel incredibly sorry for the family—incredibly sorry. But I don’t have to apologise.” Shortly thereafter, Thomas Cook’s shares plummeted and the company came close to collapse.

The CEO of Thomas Cook refused to apologise for the deaths of two children from carbon monoxide poisoning while they were on holiday in Corfu.

• Sir Bernard Hogan-Howe, the Metropolitan Police Commissioner, refused to apologise to Lord Bramall over the police’s treatment of him during an investigation into historical child abuse, despite prime minister David Cameron saying that the Force should apologise. This had unfortunate repercussions for the reputation of the entire police force.

• Clive Schlee, CEO of Pret a Manger, reportedly sent a handwritten letter of condolence to the family of a 15-year-old schoolgirl two years after her death in July 2016, and just weeks before the event was due to be scrutinised at an inquest.

Boardroom disputes are rarely as simple as they might appear on the surface. They may nevertheless be much more effectively managed if there is an understanding of the emotional drivers of the seemingly irrational behaviour of fellow board members. Such behaviour is likely the product of some loss to their self-esteem or an attack upon their values.

With improved psychological insights, it is possible to focus upon the essence and core of conflict, and apply greater tolerance and understanding. Attitudes and approaches can then become more flexible, enabling disputes to be addressed with greater efficiency and success.