Former Tech Data Limited FD Philip James settles with the Financial Reporting Council, taking a £36,000 fine and exclusion from his accounting association over his conduct in relation to preparing company accounts. 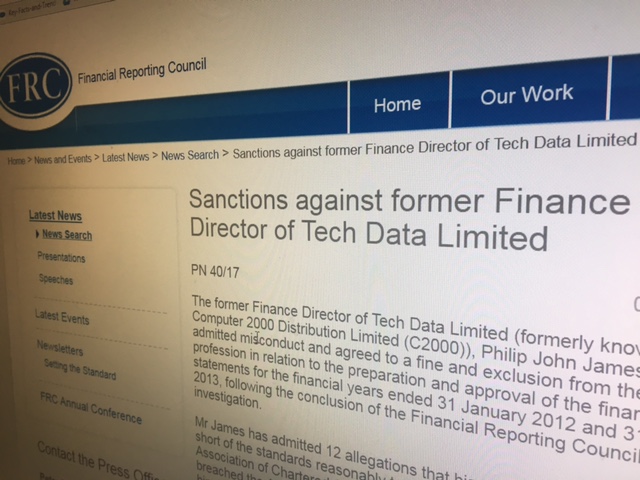 The former finance director of Tech Data Limited has been banned from membership of his accountancy association for ten years and fined nearly £36,000 for his role in the preparation of his former employer’s accounts.

Philip James admitted misconduct and agreed to the fine and exclusion in relation to the preparation of financial statements for the years ending 31 January 2012 and 2013 at Tech Data, following an investigation by accounting watchdog the Financial Reporting Council.

He admitted 12 allegations that his conduct “fell significantly short” of the standards to be reasonably expected of a member of the Association of Chartered Certified Accountants (ACCA).

Tech Data, formerly known as Computer 2000, found accounting errors that wiped millions of pounds off its revenues and profits between 2011 and 2013.

The FRC stated: “Mr James breached the ACCA’s fundamental principle of integrity, which required him to be straightforward and honest in all professional and business relationships and not to be knowingly associated with information that he knew to be false or misleading.”

James was initially fined £100,000, which was reduced to take into account his financial resources, adjusted for mitigating factors, and discounted for settlement.

The FRC’s initial investigation was into the preparation and approval of financials relating to Computer 2000 between 2009 and 2013. The scope was extended to include audit work by EY. The investigation into EY and other accountants (who are members of the Institute of Chartered Accountants England and Wales) continues.