SAP is a global trailblazer in sustainability. The German software giant’s Daniel Schmid reveals how other business leaders can follow suit.

“Put yourself in my shoes,” says Daniel Schmid. “It couldn’t be better.”

The chief sustainability officer at German software giant SAP, Schmid is referring to the company’s vision: help the world run better and improve people’s lives. “It’s such a strong statement,” he says. “I don’t need to use the term sustainability.”

Schmid is celebrating the fact that at SAP, sustainability is so deeply ingrained in the company’s mission that mention of the word is almost redundant: it is by definition what SAP does.

This is the position Schmid wishes all companies were in: that sustainability was so normalised as part of business practice it was no longer a discussion. However, that is not the status quo in the world of commerce, so for the time being SAP will have to continue being an exemplar and an enabler for its customers, the software industry and the wider business world.

And SAP has much to parade as an example. Last year, for the tenth year running, the Dow Jones Sustainability Indices ranked SAP as the software sector leader for its sustainability performance. The Good Company Ranking placed SAP third in the DAX30, while PwC’s Building Public Trust Awards gave SAP top honours.

It is hard to find any company that has more recognition for its work in making itself a sustainable operation, or one that has placed sustainability so squarely at the heart of everything it does. The company’s mission embodies the values, but the drivers are numerous.

At the heart of them, though, are two key motives. Schmid describes them as being about having a “licence to operate”, enabling companies to be sustainable with their software solutions and then allowing sustainability to drive innovation.

“It’s not the case, as many companies thought in the past, that you’re either a profitable company or a sustainable company.”

“Our customers expect us, as a supplier, to fulfil certain standards,” says Schmid, pointing out that if SAP did not meet standards on, for example, environmental management systems, emissions targets, human rights and labour policy, it would be in trouble. “If we can’t say, yes, yes, yes, then we would be out of business for not fulfilling standards in the supply chain,” he says.

Then there is the product. “Our customers expect us to help them to become more sustainable by providing software solutions, dedicated solutions, or having sustainability criteria embedded in existing solutions.”

Then there is innovation. “For us, sustainability is a strong driver of innovation,” says Schmid, “because efficiency alone will not help to overcome all the global challenges we see.”

Perhaps more importantly, the lesson that SAP has ingrained is that sustainability is not just an adjunct to being a successful business. “It’s not the case, as many companies thought in the past, that you’re either a profitable company or a sustainable company. Companies understand, across various industries, that by being more sustainable you are more successful in your business, and that’s a strong innovation driver.”

Beginnings of a sustainability journey

The company’s sustainability journey began back in 2008 with a research project asking customers and other stakeholder groups about their expectations of SAP. The following year, the company began setting up the internal infrastructure to deliver a sustainability policy. That meant new roles and new targets.

The first and probably most important lesson, says Schmid, was to avoid a “siloed approach”, which would have had a business strategy sitting alongside a sustainability strategy. From the outset, the intention was to show how the two came together, connecting business with sustainability. This involved demonstrating how things such as a 1% change in employee engagement could add millions of euros to the operating results.

“Then people understand,” says Schmid, “even the people who are purely financial optimisation driven.”

The first and probably most important lesson, says Schmid, was to avoid a “siloed approach”, which would have had a business strategy sitting alongside a sustainability strategy.

This worked not just for employee engagement but also on other non-financial measures, such as a culture index, retention rates and carbon emissions. Indeed, so successful has SAP been at illustrating the connection between success and sustainability that the most clicked-on page in the company’s integrated report is not, quips Schmid, executive remuneration, but the page showing the connection between financial and non-financial elements in the business model. Doing that has been important to persuade people.

“If you can bring it into the context of business leaders and where they are, then they understand this is not an isolated approach. It needs to be part of their core business activity,” says Schmid.

Critical to SAP’s success is the way sustainability policy was put into effect by balancing the engagement of senior executives with a bottom-up approach. 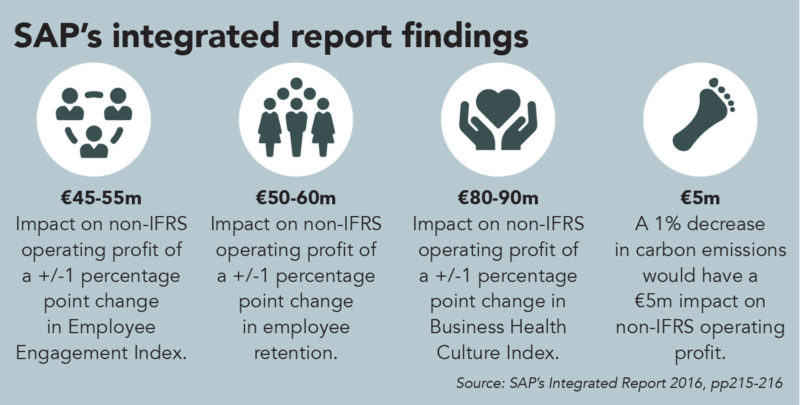 SAP has what Schmid terms a “federated” structure for sustainability. While chief financial officer Luka Mucic has overall responsibility, each board member was asked to nominate a sustainability manager to drive sustainability in their department. This established a network of executives who meet twice a year in a workshop to discuss and examine planning, targets and short and long-term aims.

“It’s a key instrument of the overall transformation and change management process,” says Schmid, “that we have such a strong network where people dedicate 10% of their working time to act as a multiplier to achieve the buy-in of their colleagues to drive certain initiatives in their location.”

“Multiplier” crops up frequently in Schmid’s speech and represents the concept of someone who can pass on the sustainability message to many others, a critical element in the SAP approach.

However, spreading the message across the company was not without other obstacles. Senior executives were an easy sell. Some of them did not even need the message from Schmid, he says. Low-level staff proved enthusiastic too. Sustainability made them “proud” to work for a company that cared. The trickiest cohort were middle managers.

“These are the leaders that have a lot of pressure every day,” says Schmid. The answer, he says, was to link sustainability to their specific roles, be they in sales, marketing, consulting or procurement. The biggest challenge was to “show them that they can better achieve their business targets when they think integrated.”

While SAP and other firms are making progress, Schmid points out that the investment community should be progressing faster. SAP itself has worked hard to increase the commitment of institutional investors. Schmid is also well aware that middle and long-term orientated “socially responsible investors” have shown a great deal of interest in SAP. However, he is concerned that mainstream investors are not keeping pace.

Schmid says he sees a need for mainstream investors to speed up the change in their investment policies. On that subject, when BlackRock announced in March it was including climate in its risk management processes, “that was a strong signal,” he says.

While SAP’s journey may have been well underway by the time the UN published the SDGs, Schmid believes they are now the guiding principles for business.

Historical financial performance is not the “best basis” for making investment decisions in the present, according to Schmid.

That said, SAP is winning plaudits and as the company delivers on its sustainability aims there is time to consider other issues, not least the importance of the United Nations’ Sustainable Development Goals (SDGs) agreed in 2015. The SDGs offer 160 targets and at least 230 key performance indicators for sustainable development.

While SAP’s journey may have been well underway by the time the UN published the SDGs, Schmid believes they are now the guiding principles for business.

Indeed, SAP is a founding member of the Global Partnership for Sustainable Development Data, a collaboration between governments and non-governmental organisations that aims to harness digital technology to help measure progress towards the goals. Schmid even speaks to Board Agenda having just returned from a World Economic Forum summit in New York organised to discuss sustainable development.

He says there is a momentum behind the SDGs among business, especially his peers in similar roles, even if the goals are not exactly well known in the average home. Not only should politicians focus on the SDGs, but so should business, he says.

“I’m convinced they are extremely important,” he says. “People like myself and my peers should use them because then we have a common language and a common target system.

“It’s the plan for our planet and there’s only one plan.”