The world is going digital and fast. Former Barclays CEO Antony Jenkins, now a digital entrepreneur, argues that if we make the right choices now, technology needn’t lead us down the road to “dystopia”. 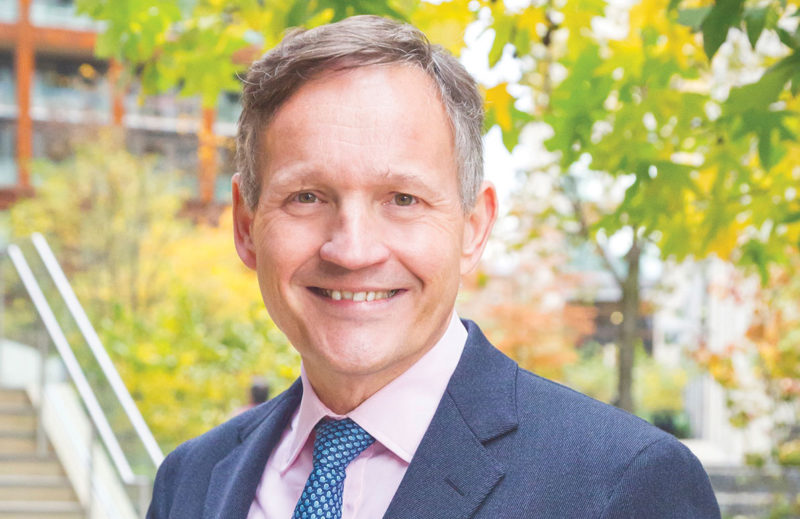 The word “dystopian” is usually only used in relation to a certain genre of science fiction. But talk to the right people about the future of business, and the D-word starts to emerge.

Antony Jenkins is one of those people. A former chief executive of Barclays, Jenkins is now a digital entrepreneur and also chairman of Business in the Community (BITC), the networking body backed by Prince Charles that campaigns for more socially conscious business.

Recently, the message from BITC has been about harnessing the benefits of digital technologies to ensure people stay in work, not out of it. It’s in this context that Jenkins deploys the D-word.

He describes business and society at a crossroads brought about by unprecedented technological development. According to Jenkins, we can either go down a route where the value of technology is “extracted and allocated to human beings”, or we take a dystopian path where technology helps accelerate inequalities by automating the bulk of mid-level jobs.

Once we do that, he says, we enter a realm where science fiction begins to meet science fact.

Jenkins is optimistic, however, that we can make a success of the digital revolution, though we have to make intelligent choices. He says the choice of routes—the “enhanced” future where people benefit, or the dystopian future—“is in our control”.

“If as a society, if as companies and organisations and individuals, we commit to adapt to the new world, then I think we can end up being a winner as an individual, a winner as a company and a winner as a nation,” he says.

“But we have to commit to it, and in order to commit to be successful in this new world, what we need to do is not ignore it but actually embrace it. And this means we have to continuously skill our population not just in the obvious areas like technology, but also things like entrepreneurship, creativity and collaboration in order to be able to create new economic opportunities for our citizens.”

“In order to commit to be successful in this new world, what we need to do is not ignore it but actually embrace it.”

Jenkins adds: “We need to be able to put the right infrastructure in place so that we can operate a lot of digitally based businesses, and we need to create the right legal environment around things like data security, and privacy.

“But if we can act now in a decisive way then I think we can create an environment which actually is very positive in the UK.”

Jenkins speaks with passion and it’s clear that he sees the way we adapt to technology as a big test, not only for business, but for individuals and society too. Software, robotics, artificial intelligence, big data and cheaper computing power mean that we are approaching a step change in the way we run businesses and our lives.

This has happened before, of course, with the industrial revolution. But when historians look back they may see that revolution developing lugubriously, compared with how the digital landscape is developing.

Jenkins has banked on the future of digital himself. After leaving Barclays in 2015 he launched his fintech start-up 10x Future Technologies, and has become not only chairman of BITC but also the Institute for Apprenticeships, after appointment by the Department for Business, Innovation and Skills.

Even at Barclays, Jenkins was known for his interest in technology—perhaps one of the reasons why the bank pioneered a process whereby customers could bank a cheque using photos taken from their smartphone.

At the bank Jenkins was nicknamed “Mr Nice”, and was credited with formulating the bank’s mission statement to “help people achieve their ambitions – in the right way.”

“As a business, you operate inside society and you are there to serve society, and not the other way round.”

That explains why he’s with BITC promoting a message which demands that companies use technology to keep people in work. That, of course, requires seeing the purpose of the company as being somewhat removed from a relentless drive for profits.

Jenkins tells Board Agenda that “profit maximisation is never going to create a sustainable enterprise. You have to serve all of your stakeholders. You have to serve your customers, your employees, your shareholders … and of course have regard to the fact that as a business, you operate inside society and you are there to serve society, and not the other way round.”

He cites financial services as one sector that would “rather operate in a manner where society believes that they are fulfilling their obligations.”

And when Jenkins talks business and technology, he is keen to stress their relationship to people and their importance.

However, he adds: “If we are not careful, technology can be dehumanising because it basically automates away a lot of work, and leaves people doing work which is basically very low on the skills book.”

The answer, according to Jenkins and BITC, is to ensure society has the right skills and that people constantly retrain, at whatever age and at any stage in their working lives. That means providing the right conditions in which people can re-skill themselves, though he adds this is the responsibility of individuals, employers and the state alike.

And that brings us nicely to the issue of boardrooms being required to confront the digital age.

At a practical level Jenkins sees this as an issue of knowledge and understanding of what’s happening with underlying technologies, such as cloud computing and the way start-ups are now able to scale up fast, as computing becomes cheaper and more readily available.

“Until you spend some time looking at that … you can’t feel the visceral nature of a threat, and the opportunity,” he says.

But boards also face coming to terms with a paradigm shift in the way business develops. The new world is “non-linear”, says Jenkins; technology can take unexpected and radical shifts and he cites Kodak, Blockbuster, Nokia and BlackBerry as demonstrating that big, apparently unassailable companies can be caught disastrously off-guard.

“I’m a fundamental believer in the fact that it’s not necessarily what your background is; it’s how open your mind is.”

“In many ways it is the end of strategic thinking,” he explains, “because it’s very difficult to do it for the five or ten-year plans now. It requires a huge focus on transformation, as opposed to innovation, and most large organisations are not architectured for transformation.

“So, it is extremely challenging for boards to address these issues and to guide the company in the right direction.”

And this is, perhaps, why Jenkins sets his store in a key boardroom characteristic: “sensibility”.

“I’m a fundamental believer in the fact that it’s not necessarily what your background is; it’s how open your mind is,” he says.

“There’s been a tendency for boards to either do a trip to Silicon Valley or hire somebody from a technology background on to the board. Those things can be helpful but, actually, what really has to happen is that people have to open their minds to what’s going on with technology, because once you open up your mind, then you can think of all sorts of possibilities which will cause you to act differently.”

Throughout our conversation there is a sense of urgency, an undercurrent of time running out. A straight question prompts Jenkins to reveal that he believes time is short to avoid the dystopian outcome he mentioned at the start.

“We are at a fork in the road. I don’t think it’s too late, but I do think we need to embrace the future and now is the time.

“Inevitably, even with Brexit and other economic and political issues that we are dealing with, I think we have every opportunity to make this country a winner in the fourth industrial revolution—but we have to act and we have to act now.”