Recent court cases hint that some non-executives may be pursuing self-interest rather than company interests. Research looks at whether the self-interest of board members is well regulated by governance controls. 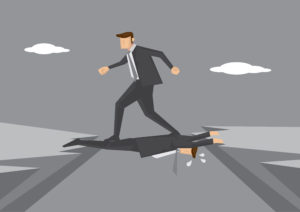 Non-executive directorships were previously seen as a “job for the boys”, a position for retired executives, family members or friends. This is no longer the case.

“Professional”, “independent”, and “expert” might be just a few words to describe those who serve as non-executive directors. Their role is much more involved, with models on corporate governance requiring those non-executives on publicly listed firms to provide effective oversight of executive management and strategy through constructive challenge.

The increase in involvement increases the prospects of non-executives using their powers for personal gain rather than for those purposes.

Our research analysed legal and governance controls placed on non-executive directors to see whether self-interest is suitably regulated, which governance means are available to regulate it, and if increased non-executive involvement is a solution to corporate governance problems.

Non-executive directors owe a duty of loyalty to their company, and as such hold a fiduciary position. This duty is strict, meaning liability is not subject to tests of good faith, negligence or dishonesty, for example. Loyalty is breached simply by the director being in a conflicting position.

This might be troublesome for non-executives who sit on several boards at any given time, and they may be concerned about a potential conflict between a duty owed to one company that might conflict with a duty owed to another.

Since the non-executive has the ability to determine the interests of the company, then those interests they are responsible for demand loyalty.

The uncertainty is cleared up when one looks to the orthodox principles of fiduciary liability. Loyalty is owed when one undertakes responsibility for another’s interests, unless the duty is specifically restricted by the express or implied terms of the contract or the conflict is authorised by the company.

However, where they have no responsibility to a particular interest of the company, then there can be no loyalty owed.

That assessment will be unique to each individual non-executive, but whether that undertaking of responsibility is contractual, voluntary or unilateral, loyalty will attach to that responsibility, thereby regulating the ability of a non-executive to determine the interests of a company.

Therefore, legal controls on non-executive self-interest are sufficient since there is no scope for self-interest in the performance of their undertaking.

Even though the non-executive’s liability is strict and sufficient in regulating self-interest, enforcement—particularly in publicly listed firms—is sparse.

Few directors are sued, but the introduction of the statutory derivative claim loosened the rules on shareholder enforcement and there has been concern that this reform could lead to increased litigation.

Despite this concern, preliminary evidence from the first 17 cases heard under the new procedure demonstrates directors, particularly non-executives directors, are no more likely to be subject to litigation.

The statutory procedure has not permitted any cases against non-executive directors, and the interpretation by the courts and the statistical data evidences the fact that such a case being successful is unlikely.

With the lack of any meaningful enforcement, corporate governance controls could be used to incentivise the non-executives to act in the interests for which they were hired.

To analyse this, a quantitative study was conducted of 30 FTSE 100 companies over a five-year period. Multiple directorships were used as a variable to identify self-interest, due to the additional income they provide, and measured against corporate governance variables such as remuneration, equity and a single coded variable of nine agency problems.

Multiple directorships are not seen as a problem in themselves since they can be beneficial for a number of reasons.

Multiple directorships are not seen as a problem in themselves since they can be beneficial for a number of reasons. However, it is those reasons for which the non-executive takes the additional appointment that could be problematic, since they may not take it for the company’s benefit but for their own personal gain as an additional fee earner.

The purpose of this study was to identify those governance controls that could control self-interest, but also whether self-interest has a relationship with bad governance, i.e. agency problems. The tests were also conducted during the financial crisis, 2006–2010, to account for changes in market conditions.

The preliminary findings showed a significant positive relationship between remuneration and multiple directorships. This provides some evidence to suggest that increased fees for non-executives to reflect their greater involvement may not be having the desired outcome, as it relates positively to their number of additional appointments. In short, increased fees could relate to greater self-interest.

This self-interest may be partially controlled through the introduction of equity for non-executives. Overall, equity had a bigger effect on non-executives’ additional appointments than remuneration.

This effect was negative, meaning non-executives took fewer appointments where equity was higher. Thus, equity could serve as a partial solution to self-interest.

However, equity payments also positively correlated with the number of firms’ agency problems; also, the bigger effect than remuneration disappeared after 2008. This suggests that equity may be more harmful and have little influence in difficult market conditions.

Another concern on how well non-executive self-interest is regulated is that multiple directorships positively related to a concentration of agency problems in a company.

The suggestion from this finding is that non-executive self-interest can lead to bad corporate governance. The possible explanation for this is what is known as the “busyness hypothesis”. This is where the non-executive is too busy to provide effective oversight of the company. This evidence supports that hypothesis.

The law is effective in controlling non-executive director self-interest yet the lack of enforcement may make that somewhat redundant.

Corporate governance models may not be well equipped to manage potential self-interest amongst non-executive directors, and a root-and-branch review of governance may be necessary to assess how increased involvement can affect the company.

Overall, the evidence suggests that increased non-executive involvement in the company will not improve corporate governance.

David Gibbs is a lecturer at the University of Hertfordshire’s Law School. His doctoral thesis is entitled “Non-Executive Self-Interest: Legal and Governance Controls”.