The UN Global Compact is the world's largest corporate sustainability initiative with 13000 corporate participants and other stakeholders over 170 countries with two objectives: "Mainstream the ten principles in business activities around the world" and "Catalyse actions in support of broader UN goals, such as the Millennium Development Goals (MDGs) and Sustainable Development Goals (SDGs)". Moving forward, the UN Global Compact and its signatories are deeply invested and enthusiastic about supporting work towards the SDGs.

The UN Global Compact was announced by then UN Secretary-General Kofi Annan in an address to the World Economic Forum on 31 January 1999, and was officially launched at UN Headquarters in New York City on 26 July 2000. The Global Compact Office works on the basis of a mandate set out by the UN General Assembly as an organization that "promotes responsible business practices and UN values among the global business community and the UN System." The UN Global Compact is a founding member of the United Nations Sustainable Stock Exchanges (SSE) initiative along with the Principles for Responsible Investment (PRI), the United Nations Environment Programme Finance Initiative (UNEP-FI), and the United Nations Conference on Trade and Development (UNCTAD). 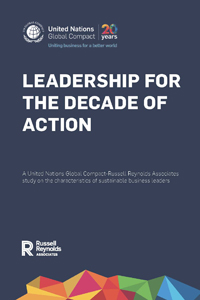 Leadership For The Decade Of Action

The United Nations Global Compact and Russell Reynolds Associates set out on a collaboration to answer an important question: how can organizations make sustainability core to the DNA of their leadership teams? To answer this, we conducted in-depth interviews and did background analysis on a group o... 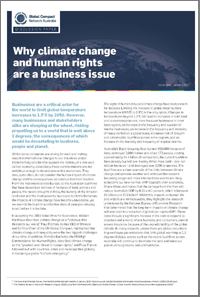 Why Climate Change And Human Rights Are A Business Issue

While some companies are driving forward and making deep transformational changes to our industries and/or implementing policies that support the delivery of a net-zero carbon economy, collectively these transformations are not ambitious enough to decarbonise entire economies. They also, quite often... 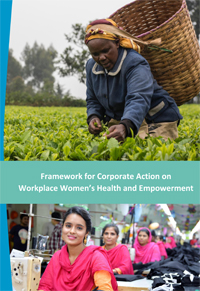 Framework for Corporate Action on Workplace Women’s Health and Empowerment

The United Nations Foundation, together with the UN Global Compact, UNFPA, and a number of women’s empowerment experts, aims to pull together the best practices in investing in workplace women’s health and empowerment from companies over the last ten years, providing a clear set of steps and con...

No Articles posts related with this company are available.

No Interview posts related with this company are available.