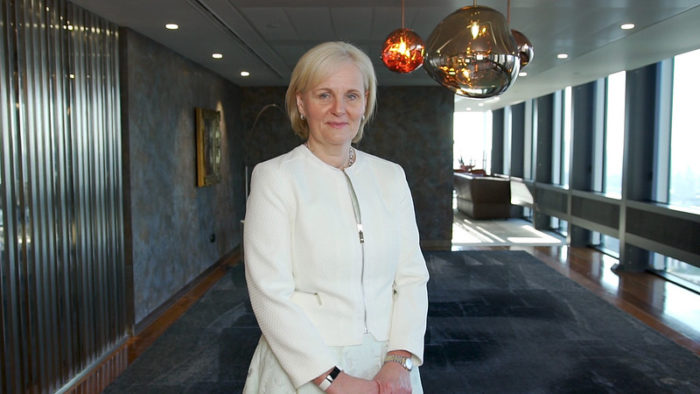 The newly appointed boss of Aviva this week backed herself to make a success of leading the insurance giant by investing £1m of her cash in the company’s shares. A clear signal to the market that the freshly minted chief executive believes in the future.

She’s not the only one. Aviva chair George Culmer declared his belief in Blanc when she was appointed: “I know she will bring real dynamism to Aviva and re-establish our credentials as a high-performing, innovative and customer-centric business.”

That statement comes loaded with the assumption that Blanc has a job on her hands. On her appointment analysts quoted in the press tended to focus on what would happen next at Aviva rather than celebrate her investiture. After all, they wonder, will the company go through yet another “inevitable” round of restructuring?

That rather takes the shine off Blanc’s appointment as chief executive—one of the few top female CEOs the UK can boast. However, she does lead a company that has not exactly impressed the markets in recent times, especially after her predecessor, Mark Tulloch, led his own reorganisation.

In November last year Tulloch confessed that Aviva “needs to be better” after a promise to cut debt by £1.5bn and scythe £300m from annual costs by cutting 1,800 jobs.

On taking the top job Blanc indicated she was willing to shake things up, perhaps even ready for a ruck.

That is no joke. In addition to her other achievements, Blanc, born and brought up in the Rhondda Valley and the descendent of Welsh miners, is chair of Welsh rugby’s Professional Rugby Board.

While clearly a cheerleader for a game of hard knocks, Blanc has shown no small amount of finesse in her career. After a history degree at the University of Liverpool and an MBA from Leeds, Blanc joined Commercial Union going on to work as a fleet and casualty underwriter, eventually becoming the youngest employee—and first woman—to manage a branch.

Other jobs included spells with EY and Axa where she was a regional director. A move to Groupama, the French insurance brand, followed then another to Towergate Insurance where she led the retail broking division. Then came a return to Axa in 2011 to lead the commercial division and win the Insurance Times’ CEOs’ CEO of the Year Award.

In 2018 she because Zurich’s chief executive EMEA, but left a little over a year later in a resignation that caused a minor quake through the insurance industry.

Now she leads Aviva, a business with a better-than-expected £1.39bn operating profit in 2019 but a share price, at 300p, that is well below the highs of 420p at the beginning of the year and a long way from the 544p peak of 2018. Though it is worth noting that the share price is up since Blanc’s appointment.

Blanc has already begun the process of change. She recently announced a deal to sell a £1.6bn majority stake in Aviva’s Singapore business and, according to many reports, City analysts expect more big changes to follow.

And while she works out the future of Aviva, she also has strong views on other topics, not least women in business. In a CNBC interview she said that so far only the “easy” things had been done to tackle diversity and gender disparities. Companies should be prepared take a “risk” on women leaders, she said, especially when they to turn to work after years away raising children.

In an interview with The Independent she said: “It’s like there is no room for error for women,” and argued that “diversity changes things for the better”.

“If you look back to the financial crisis of 2008, one of the main criticisms was, that around the boardrooms, everyone was the same. They indulged in group think.

“The only way you can get away from group think is to introduce greater diversity, whether that is by age, gender, ethnicity or whatever. It doesn’t really matter,” she said.

One issue Blanc will have to contend with is whether the Covid-19 pandemic will produce an avalanche of insurance claims. Recent court hearings suggest businesses are entitled to support, though insurance initially resisted.

Looking at the past we can see how Blanc might approach current issues. In a previous role as president of the Chartered Insurance Institute she was acutely concerned that the reputations of financial services firms were in the gutter following a number of scandals. At the time she said being “professional” was an “inherent duty”. She added she was on a “crusade for morality” in insurance. She may need that mindset yet again.