The economic, social and environmental benefits derived from greater gender equality on boards are numerous—and increasingly important to investors. 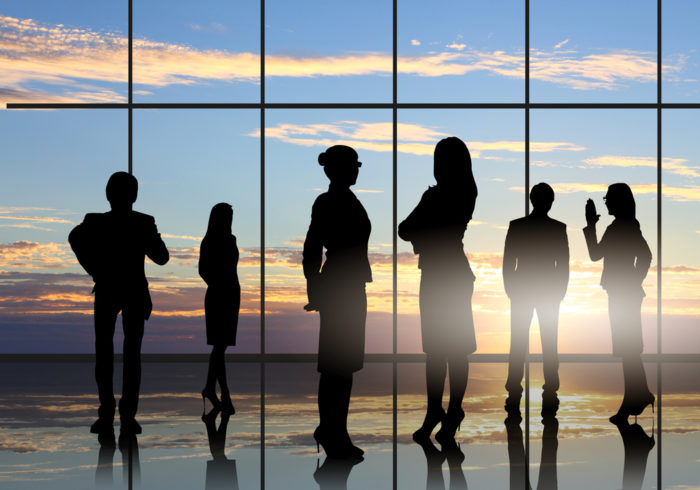 The traditionally low representation of women in management positions is due to the so-called “glass ceiling”, an invisible cultural barrier that prevents the best educated women from holding positions of responsibility in companies. Equal opportunities, both in social and economic terms, is a fundamental human right. Furthermore, the systematic exclusion of women, who represent half of society, leads to sub-optimal management bodies in companies.

A primary objective of the European Union is to achieve equality between men and women in all areas, including decision-making and representation on company boards. In this regard, some governments have enacted mandatory or voluntary laws to promote gender equality, while others have only given recommendations.

The table below shows the situation in the main European countries, as well as in the US, Japan and China, for the years 2007 and 2020. It can be seen that the Nordic countries have, in general, the highest percentages and have a more favourable tradition towards equality on boards. Currently, Greece and Portugal have the lowest figures. The UK is in an intermediate position, with 27.2% female presence, meeting its target of 25%. The US shows a situation well below that of most developed European countries. Outside Europe, China and Japan show figures that indicate strong discrimination against women in decision-making. 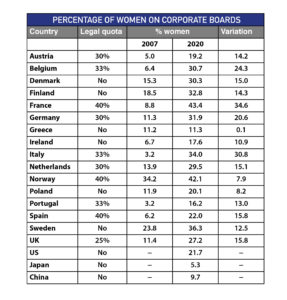 The arguments in favour of gender equality on boards of directors can essentially be classified into two groups: ethical and economic. From an ethical point of view, equality can be considered a goal in itself, so that if the number of women increases, the goal is achieved, regardless of the effects this might have on the company or its environment.

However, from an economic perspective, the quota set by law has been widely questioned, arguing that women should be promoted on the basis of their training and professional experience, since otherwise the company could be disadvantaged in terms of profitability. However, if the increased presence of women in management positions is shown to be positive for the company, economically, socially and environmentally, then the legal quota would be justified.

Gender diversity has been seen as a double-edged sword, giving rise to the debate of homogeneous versus heterogeneous groups. It is argued that homogeneous groups (i.e. corporate boards made up of only men) communicate better and are more likely to share the same opinion, thus having greater cohesion and less emotional conflict. In contrast, heterogeneous groups (i.e. men and women) have a broader perspective, offering a wider range of alternatives for evaluation and possible solutions.

There is an argument that men and women would experience conflicts and dissatisfaction, so that decision-making would be slower and less effective. This could clearly be a problem in competitive environments, where the ability to react quickly to market changes is important. However, in reality gender diversity brings more advantages than disadvantages, leading to higher-quality problem solving, outperforming homogeneous groups.

Studies show that women have a better knowledge of customers and a better understanding of the market allows for greater market penetration. Women have more relational skills, are more co-operative and have a more participatory style in decision-making than men, which facilitates the relationship with other stakeholders in the company (employees, suppliers, etc.).

Moreover, the values that women assign to social issues are different, so they are more generous towards the community, paying more attention to the welfare of society, being more socially and environmentally committed; in short, they are more altruistic and more ethical in decision-making.

The latest financial crisis reinforced the importance of corporate social responsibility, so that traditional corporate financial indicators are now complemented by environmental, social and governance (ESG) information. There are a number of scientific studies that support how the increased presence of women on corporate boards of directors leads to better results, which are measured through the valuation of shares in financial markets, as well as more socio-environmentally responsible policies.

Therefore, economic results, visibility in the media and the demonstration of commitment to social and ethical issues will lead to an increased demand for their shares and an increase in their price. In short, gender diversity is a signal to the markets, which provides the company with a greater degree of legitimacy and consequently enhances its reputation.

The percentage of women on boards of directors is still far from equal, due to the deeply rooted values in much of society regarding the role of women. This existing discrimination, not legal but real, can be reduced through active gender policies.

Empirical evidence provides economic reasons for promoting equality in company decision-making: the higher share of women increases the market valuation of companies, as well as their social and environmental behaviour.

Even if the higher percentage of women in management positions does not influence the improvement of results, as long as it does not induce a detriment to the performance of companies, legislation should demand an increase in the presence of women for ethical reasons. It would be beneficial for the quota policy to be complemented by educational policies to improve women’s practical experience and by initiatives to balance work and family life.

María del Carmen Valls Martínez is a senior lecturer in economics at the University of Almeria, Spain.