Companies used to avoid political issues at any cost. But knowing when—and how—to speak out is becoming a core skill for business leaders. 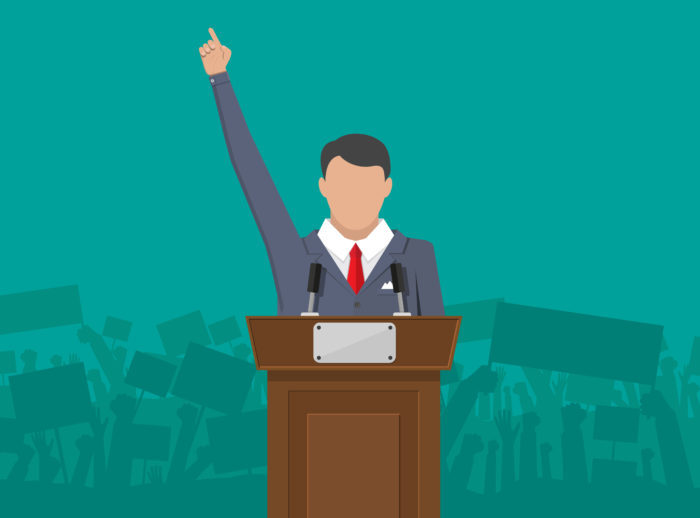 As the chaos and uncertainty of Brexit continues, the impact on UK business is starting to bite.

Industry’s strategy of abstention and neutrality has materialised into a freeze on spending and hiring, and economists warn of the increasing risk of recession. The government has warned that leaving the European Union without a deal could lead to delays at ports, food price hikes and disruption to medicine supplies.

Any deal that might be successfully negotiated with the EU and approved by Parliament is likely to cause significant economic harm to UK industry, not least because it would put the country in a far worse relationship with its largest trading partner. As public confidence in politicians sinks ever lower, surely it is time for business in the UK to show its hand.

In the UK, most executives still baulk at the idea of entering the political fray, unlike in the US where leaders actively engage in political issues

In the UK, most executives still baulk at the idea of entering the political fray, unlike in the US where leaders in all sectors of business actively engage in controversial political issues and social debates.  In fact, with a shift in workplace demographics, consumers and employees increasingly expect their workplace to show where they stand.

The Edelman Trust Barometer, a poll of 33,000 individuals across 28 markets around the world, showed 64 percent think CEOs should take the lead on change rather than waiting for their government to impose it, and 79 percent want CEOs to be visible in sharing the company’s purpose and vision.

We have seen Marc Benioff use Salesforce’s success as a platform to speak out against North Carolina’s repressive transgender “bathroom law” and against the Indiana government’s “religious freedom legislation” which discriminates against the LGBT community. Walt Disney Co., Netflix, and other corporations have considered possibly exiting Georgia if the state’s “heartbeat” bill goes into effect, while Tim Cook, CEO of Apple, has been vocal on the environment and LGBTQI+ rights.

It is not always easy. Given how politically polarised the world has become, taking a stand can have financial implications and put companies in a difficult position alienating customers, employees and other stakeholders who hold the opposing view. This is on top of longstanding questions about the legitimacy of unelected executives’ participation in politics. Sometimes, however, they are dragged into political debate.

Cathay Pacific CEO Rupert Hogg was forced to resign after his airline (30 percent owned by Air China) was accused by Beijing of not doing enough to reign in employees who showed support for Hong Kong’s pro-democracy protests. The airline’s shares plunged to 10-year lows, rebounding only after it condemned the protests and vowed to follow Chinese aviation regulations.

Given how politically polarised the world has become, taking a stand can have financial implications

Delta Airlines in the US faced similar pressure: US$50 million in tax benefits was pulled after the airline eliminated a discount programme for National Rifle Association members following the horrific high school shooting in Parkland, Florida.  (In fact, the decision reflected the airline’s “neutral status in the current national debate over gun control”.)

Knowing how and when to take a stand on ostensibly political issues requires careful consideration. Business leaders need to assess the material affect the issue may have on their firm’s performance and whether it goes against their core values or mission statements. And then consider the ramifications of their actions (or inaction).

To help leaders make these decisions, Daniel Korschun (Drexel University) and I have created the Framework for Corporate Political Positions (see Figure 1), outlining the four possible stances that companies might reasonably take on political issues:

We have noted when a stance is appropriate and what firms should emphasise when explaining their actions to their stakeholders. 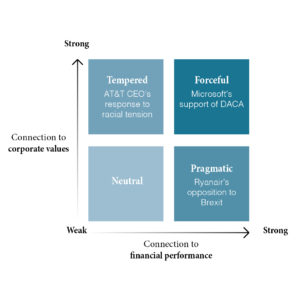 When a political issue affects a firm’s bottom line and is against stated values, leaders should feel comfortable taking a strong stand. They should be unambiguous in their statements and clearly link the issue to their company’s values and operations.

Microsoft, for example, took a forceful position against US President Donald Trump’s decision to end the Deferred Action for Childhood Arrivals (DACA) program. Brad Smith, president of the software giant, wrote directly to the US Congress, noting in an open letter how the decision opposed his company’s values and harmed its ability to attract talented employees.

When an issue relates to the stated core value of a company but has little material impact, or may cause affront to some key stakeholders, it is better to take a more low-key approach. The response should be framed broadly, tempered with stakeholders’ beliefs and expectations, but not so strong that it could harm the material interests of the company.

AT&T CEO Randall Stephenson did just this in response to the Black Lives Matter protests of the shootings of unarmed black men, and the killing of police officers in Dallas and Baton Rouge. In a speech to employees, Stephenson noted how racial tensions were ripping apart American communities and urged his listeners to start talking about these problems. He ended his speech with “tolerance is for cowards”.

A pragmatic approach is appropriate when a political issue is of material importance to corporate performance but does not relate to the company’s core values. Corporations should be clear about how the issue will impact revenues, costs or risks, rather than focusing on ideological or moral reasons.

Ryanair CEO Michael O’Leary is one of the few business leaders who has been openly vocal in opposition to Brexit. He has warned about the risk that flights between Britain and Europe may be grounded for days in the wake of Britain’s exit from the EU and noted that the cost of travel in Europe would increase, reducing Ryanair’s profitability.

When a political issue is not linked to a stated corporate value nor likely to affect profits or performance, firms would do well to lay low and abstain from taking a position. In such circumstances, the company may acknowledge concerns of its stakeholders but should affirm its non-political stand.

When doing nothing is no longer enough

Companies used to avoid political issues at almost any cost. Today, however, the public expects CEOs to engage in thought leadership.

When an important issue threatens a firm’s values, business or the economy, doing nothing is no longer enough. Given the rising swell of opposition from employees, customers and trade partners as UK Prime Minister Boris Johnson arms himself to push through a no-deal Brexit, there is a strong case for action.

British companies should take a careful, measured approach and remember that there are degrees of action, not necessarily extreme, open to them. For many, their economic interests are very much at stake, if not their values.

N. Craig Smith is the INSEAD chair in ethics and social responsibility, the programme director of the INSEAD Healthcare Compliance Implementation Leadership Programme and a specialist professor at the INSEAD Corporate Governance Centre.