Some companies have adopted a “one and done” attitude to female representation on boards, said Denise Wilson in a speech to the ICSA conference. 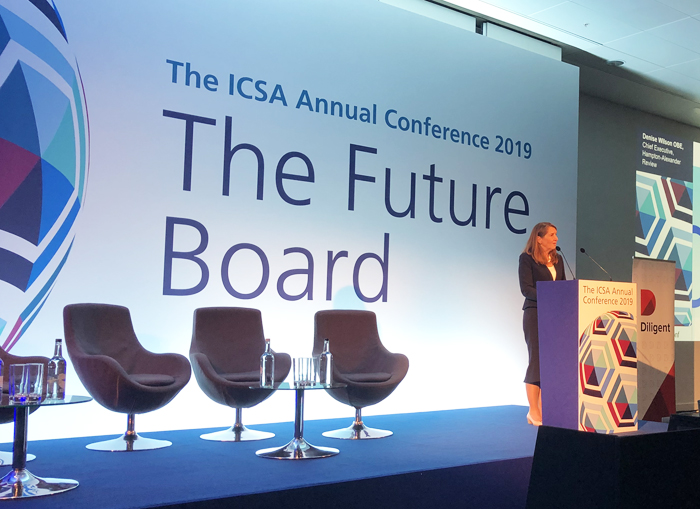 While the UK approach to boardroom gender diversity is “arguably” one of the most sophisticated in the world, there is still work to be done, according to the chief executive of the Hampton-Alexander Review, the body that campaigns for improved representation of women at the UK’s top companies.

Denise Wilson was speaking to delegates at the annual conference of ICSA: The Governance Institute in London when she made her observations.

However, Wilson said there remained concerns about the 50 companies in the FTSE 350 without a single female representative on their executive committees, and the lack of female chairs.

Wilson said the use of targets—33% for female representation on boards— had been “key” to voluntary improvements compared with legislative approaches in other countries.

But she added:“It’s clear that many companies have been working hard for several years…others have been slow, or working slowly, while a few are going nowhere.”

She added that of the 880 women on FTSE 350 boards, only 27 had reached the role of chair. “The question is why… have so few been appointed to have the top job.”

Wilson said there was also a challenge to shift attitudes at companies that have appointed a single female board director and believe they are finished—so called “one and done” boards.

She said: “These days tokenistic approaches are little better than all-male boards.”

She did however praise a number of companies—BHP Billiton, Vodafone, O2, Aviva, Diageo, Unilever and Lloyds Bank—for their work to encourage women to reach senior levels.

However, Wilson remained emphatic that there were still issues to address.

“There is much more work to do challenging unhelpful myths and banishing unconscious bias,” she warned.