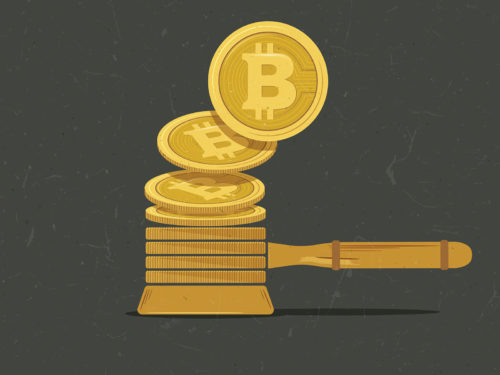 In our modern digital world, concepts like disruption, artificial intelligence (AI) and blockchain have gained much attention. But these developments raise questions as to whether the current governance framework, developed for decision-making in boards and shareholder meetings, will or should be disrupted as well.

Our Corporate Governance Dialogue recently heard from Prof. Christoph Van der Elst and Anne Lafarre, who began by highlighting the main conclusions of their joint work detailed in the article “Blockchain Technology for Corporate Governance and Shareholder Activism”, posted on the Harvard Law School Forum.

Both see blockchain as a technology that offers smart solutions to classic corporate governance inefficiencies, especially regarding the relationship between shareholders and the company.

Both see blockchain as a technology that offers smart solutions to classic corporate governance inefficiencies, especially regarding the relationship between shareholders and the company.

As blockchain technologies represent a novel approach to age-old problems of financial record-keeping, they could also offer a new way of creating, exchanging, and tracking the ownership of financial assets.

“This is without prejudice to member states law providing for [the] processing of the personal data of shareholders for other purposes, such as to enable shareholders to cooperate with each other.”

In practice, although companies inform the market of shareholders’ changes, it takes too long for financial services and market authorities to disclose the information.

Blockchain therefore makes the information available straight away, which is the most reliable solution for shareholder voting. Prof. Christoph Van der Elst cites the example of the Delaware Blockchain initiative. In 2017, Delaware amended its Corporate Act to create the possibility of having all shareholder information stored on a distributed stock ledger.

In France, the “Loi Sapin II” already mentions distributed ledger technologies, and allows the government to take action to facilitate the issuance and transmission of shares through such technologies. The Australian stock exchange plans to use a system fuelled by blockchain technology by 2020.

While some simple blockchain mechanisms that would facilitate share issuance and trading are already available—some stock exchanges have proposed using blockchain as a new method of trading corporate equities and tracking their ownership—certain more complex applications still have to be spread and developed to ensure efficient shares voting. Blockchain could also potentially strengthen shareholders’ engagement.

The different level of engagement across shareholders is a given. The traditional AGM theoretically plays an important role in collective shareholder monitoring with important functions (information, forum and decision-making).

However, in practice the AGM is considered a dull mandatory, yearly ritual, suffering from procedural flaws in all of its main functions. According to surveys conducted by Prof. Van der Elst and Anne Lafarre, the participation degree (shareholder turnout rates) is rather low.

Blockchain could increase shareholder democracy, as it provides a common platform for all shareholders to engage in voting or asking questions through the blockchain.

Institutional investors take the lead in between the meetings; many important (outside) shareholders have limited needs for the AGM forum, since they have many more opportunities for timely and private discussions with boards and top management, outside of the AGM.

In addition, voting often takes place before the AGMs. Votes are uploaded in proxy advisor voting systems and the results are available beforehand. This generates a different, level playing field among shareholders. On top of that, there are procedural flaws, because shares are usually held through complex chains of intermediaries. All these intermediaries add transaction costs to shareholder participation.

According to Prof. Van der Elst and Anne Lafarre, blockchain could increase shareholder democracy, as it provides a common platform for all shareholders to engage in voting or asking questions through the blockchain. General meetings through blockchain could be organised more often than on a yearly basis. This way, AGMs would become modernised corporate organs.

A summary of blockchain advantages

• In terms of shareholder and corporate information: blockchain gets rid of scattered ledgers and long delays;

• In terms of chains of intermediaries and remote voting: blockchain adds transparency, security and verification (“feedback”);

• In terms of shareholder voting transaction costs and “shareholder democracy”: Blockchain offers cheap and fast decision-making in a harmonised way.

Blockchain is what has become known as an “append only” digital transactions ledger. In short it is a ledger held in the cloud where no single user can take control. Information, such as transactions, can be added, but no previous inputs can be edited, adjusted or changed.

The system allows transactions to be published so that any user involved in the chain of users can view the data and verify that recorded events are authentic.

In an article for Board Agenda, Paolo Tasca, executive director at the UCL Centre for Blockchain Technologies, wrote: “The concept of immediate secure transactions, with minimal cost and no required intermediaries, promises to cardinally alter the current modus operandi in many business sectors and in our society at large.”

In short it is a ledger held in the cloud where no single user can take control.

Among the areas that could benefit from blockchain, Tasca highlighted improved access to financial and legal service in emerging economies; securing intellectual property for artists thus cutting out intermediaries such as agents and galleries; and creating a shared economy, for example being able to share clean energy generated by households.

Technology research house Gartner concluded that while there is great interest in blockchain, adoption has so far been low.

Gartner’s report, Blockchain-Based Transformation, said: “Our research, interactions and surveys have consistently shown that leaders are intrigued by this technology, and want to learn and experiment with it, but adoption is sparse. The Gartner 2018 CIO Survey shows that while two-thirds of CIOs have some interest in blockchain, only 1% have implemented, or invested in, blockchain, and 22% are in the short-/medium-term planning or ‘experimenting with’ stage.”

• Only 10% of enterprises will achieve any radical transformation with the use of blockchain technologies.

• By 2022, at least one innovative business built on blockchain will be worth $10bn.

The Corporate Governance Dialogue was created by ecoDa (the European Confederation of Directors’ Associations) as an open forum for discussion and debate on key trends and developments in governance across Europe, with the aim of fostering sustainable corporate decision-making.

Lutgart Van den Berghe is a board member at ecoDa, leader of the Corporate Governance Dialogue and executive director of GUBERNA, the Belgian governance institute.