How do leaders and organisations become resilient? Andrew Kakabadse considers how leaders can bounce back from mistakes and trauma. 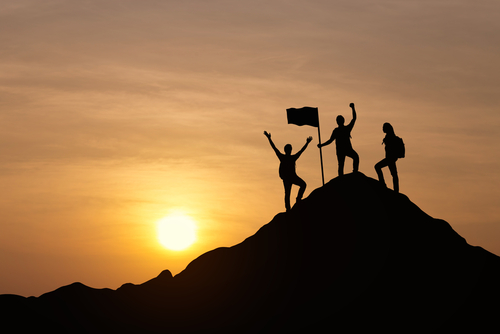 Being resilient is not a clean concept, it is a result. Possessing a strong Resilience Quotient, or RQ, means having the ability to work through and survive a traumatic event, as well being able to face adversity on an ongoing basis.

The first RQ question to consider is “what are your organisation’s values?” When an organisation possesses multiple value statements, finance effects every decision. The focus is on short-term deals rather than long-term investment, so any effort to build a resilient community has little or no meaning.

It is clear that most organisations today are not resilient. Instead they are transactional and place great economic value on each asset the organisation owns.

Organisations also need to understand competitive advantage, and the most resilient achieve this by investing heavily in education, even when things are going badly for them. This can be illustrated by developing internal concepts or public policies.

Education systems are most likely to succeed when they take the form of “concept plus leisure”. One example is developing a policy of “we don’t hire the best for this transaction, we develop our own people to cope. If we need external experts we only bring them in if it’s absolutely necessary”.

Who creates a climate of resilience?

Resilience should always be led by the chairman or chief executive. It is important to establish who will gather the necessary evidence to quantify the need for enhanced resilience.

Rapid change from short-term financial focus to deep-rooted values is very difficult, and it is clear that most organisations today are not resilient. Instead they are transactional and place great economic value on each asset the organisation owns.

Identifying fracture points, places in the structure of an organisation where things go continually wrong, is fundamental to building organisational resilience. Both the management and the board know this, but relationships are often too sensitive to openly address these issues.

This ties in closely with the final element of RQ—the need to be realistic. RQ must be evidence-based so that the consequences of change can be measured and understood. It is of course possible to become overwhelmed by the volume of potential evidence, but the entire purpose of such a process is to bring everyone onto the same page.

What evidence should be gathered?

RQ data may evidence trends, specific business issues or investments details, but the most powerful evidence is how the organisation is currently “living?” What and where are the system blockages or fault lines? At which point are the values of the organisation not being adhered to, actively rejected or promoted?

Much of this is soft evidence, and resilience is based on hard data, such as, “If we buy this, how much will it cost?” or “If we do that, what will the outcome be in terms of profit?” Evidence-gathering has many phases. It includes collecting knowledge about what is going right and wrong, along with significant interviewing and testing.

When soft evidence has consequences built in, gathering data takes much longer. For example, “We have to get your opinion if we do this on what the consequences will be.” One opinion will differ slightly from another, then this information has to be aggregated. The result is that soft evidence collection becomes an expensive and time-consuming exercise.

The resulting challenge is that the organisation is left feeling slow and lacking in resilience. In fact the opposite is true. By taking time to gather evidence that involves consequences and digesting information carefully, the organisation actually becomes more resilient.

This is because fundamentally people say to themselves, “If circumstances dictate that I have no clever strategy for getting a bonus at John Lewis in the months immediately following 9/11, then at least I can understand and accept the situation.”

Quick evidence, on the other hand, focuses only on the transactions an organisation is committed to and the consequences are singularly based on this detail. This results in a “We want to do this, and if this is the case then these people will have to go because otherwise it blocks our plans.” The bigger, long-term plans and effects are lost for simplicity’s sake.

Academic literature refers to the “régler”—French parlance for someone who constantly adjusts. So if there is a problem we adjust the budgets, or target, or anything else that will eventually lead to success, rather than look at the bigger picture or problem.

The day after the UK referendum and decision to leave Europe, the public were told by the European Union that their budget and economic plans were finished. By law the UK would be entitled to complete its budget allocations for Europe until the day it exited the EU, but after this, officials and naysayers said all bets were off. This meant that anybody whose work depended on close links with Brussels would be cut out of their existing networks and there would no way for them to connect further.

“Resilience is the ability to recover from fumbles or outright mistakes and bounce back. But flexibility alone is not enough. You have to learn from your errors.”

Would the UK government really accept this state of affairs? No, of course not. Instead they will continue to give the exact same amount of funding they currently contribute, so organisations and individuals will continue to network and complete projects as usual.

The régler response of “fix it for today” works on the assumption that such an arrangement will continue into the future indefinitely, without considering any long-term cultural damage caused to values and practices that are taking place. This outcome occurs when organisations avoid dealing in evidence and pretend to have firm values which simply don’t reflect everyday practice. When it comes to resilience and the régler, they will tell you that everything is fine, but actually nothing has changed.

As Rosabeth Moss Kanter, professor of business at Harvard Business School, explains: “Resilience is the ability to recover from fumbles or outright mistakes and bounce back. But flexibility alone is not enough. You have to learn from your errors.

“Those with resilience build on the cornerstones of confidence—accountability (taking responsibility and showing remorse); collaboration (supporting others in reaching a common goal); and initiative (focusing on positive steps and improvements). These factors underpin the resilience of people, teams, and organisations that can stumble but resume winning.”