It is now widely recognised that there has been an exceptional increase in executive pay over the past 30 years. But recent academic research asked executives: is it right and fair that some people earn disproportionately more than others? 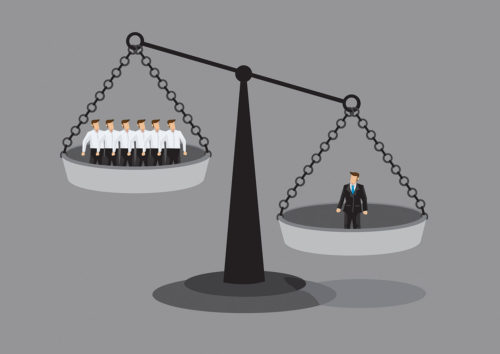 That pay has grown is clear from the evidence. In 2015, the median total remuneration of FTSE 100 chief executives in Britain was around £4m. Adjusted for inflation, this is three times the average amount a chief executive was paid in 2000.

Over the same time period the median earnings of other employees of FTSE 100 companies, which stood at £45,173 in 2015, increased by only 1.4 times in real terms.

Complaints about pay levels from investors and politicians make headlines nearly every day. However, hardly anyone asks executives what they think.

With Dr Susanne Burri of the London School of Economics’ Department of Philosophy and the support of PwC, I have been studying ethical theories of distributive justice among a global group of more than 1,000 executives, using a thought experiment and hoping to benefit from what journalist James Surowiecki has called “the wisdom of crowds”.

The objective of our research was to develop an understanding of how business executives conceptualise distributive justice. Our enquiry was exploratory, touching on many issues in order to test existing theories, to seek new hypotheses, and to see the overall shape of the phenomena.

To this end we constructed a questionnaire which was designed to make participants think deeply about distributive justice and to provide insights into their thinking.

To encourage executives to think carefully about the questions, and in an attempt to keep in check the influence of any self-serving biases, we asked participants to engage in the following thought experiment before answering the questionnaire:

Suppose that from tomorrow morning you find yourself in an imaginary society where the skills and talents that are relevant to economic prosperity are very different from the ones that you are currently familiar with. In this society you might, for example, have a successful career if you are able to carry heavy objects over large distances, or if you are prepared to perform monotonous tasks for hours at a time.

Skills and knowledge may also be rewarded in this imaginary society—or they may not be—the point is that you don’t know when making your decisions.

This thought experiment resembles one used by the philosopher John Rawls in his book A Theory of Justice. We wanted participants to imagine themselves in a world where their current skills and talents were without value, and in which their own level of income was therefore entirely uncertain.

PwC arranged for our survey to be sent out electronically to around 100,000 business executives from around the world. After the normal problems, delays, reminders etc., we ended up with a usable sample of 1,123 participants. This was a relatively poor response rate, but not atypical given that data on the preferences and attitudes of managerial elites is known to be particularly hard to gather, especially when it comes to a sensitive matter like pay.

At first sight, this pronounced multidimensionality among executives is puzzling. While some ethical principles are doubtlessly compatible, it is self-evident, at least to a philosopher, that a special concern for the worst-off is at odds with principles that advocate non-interference with market outcomes.

This suggests that executives believe that companies cannot simply leave matters of distributive justice to governments.

The puzzle is resolved if views of justice are regarded as (affective) values, substantially determined by feelings and emotions rather than (cognitive) principles, acquired through reason and understanding.

We also wondered whether business executives’ views about distributive justice are in part context-dependent. For example, an executive who subscribes to five or six principles may endorse a particular value whenever they are able to imagine a scenario in which that particular principle strikes them as most morally relevant.

Our second finding was that executives endorse similar principles at society and at company level. This suggests that executives believe that companies cannot simply leave matters of distributive justice to governments.

Our data indicates that the vast majority of executives are not convinced by this line of argument, and accept that companies have an important role to play in ensuring distributive justice.

The third finding was that distributive justice views among executives are fairly homogenous across industries, genders, and geographical locations. While we observed some differences between executives of different sexes, ages, income levels, nationalities, and industries of employment, these differences were not statistically significant.

Business executives tend to live in societies and work for organisations that they often perceive to be unjust in some way.

Although this may be because our survey was not sensitive enough to identify such differences, we conjectured that it is because business executives globally form a reasonably homogenous group with broadly similar views on distributive justice.

Lastly, business executives tend to live in societies and work for organisations that they often perceive to be unjust in some way. Most strikingly, 84% of executives thought that equal opportunity is an important principle of distributive justice at the society level of analysis, but only 37% believe that the society in which they live is characterised by equal opportunity.

At company level, 89% of executives endorsed a desert-based principle of distributive justice, but only 46% thought that such a principle characterised existing remuneration policies within their organisations.

By looking at the way the results were scattered across the six principles we were also able to identify four clusters of data. These represent different “moral tribes” among our sample.

Idealists. They believe that people should be rewarded for the contribution that they make to their communities, principally with a view to making the worst-off as well-off as possible. All members of a community should have an income that is sufficient for them to lead a dignified life. There is no automatic entitlement to income or wealth. Efficiency is not the only criterion by which outcomes should be judged.

Communitarians. Communitarians think that all members of a community should have an income that is sufficient for them to lead a dignified life. Equal opportunities are important—nobody should be at a disadvantage because of the circumstances of their birth or because of brute bad luck. There is no automatic entitlement to income or wealth. Talent, effort and contribution are not the main criteria for allocating economic benefits.

Free marketeers. This group argues that talented people deserve to receive economic benefits. Everyone should have the opportunity to demonstrate their ability. Efficiency is the main criterion for determining how income should be allocated. No one is automatically entitled to income or wealth. The well-off do not have an automatic obligation to support the worst-off.

Meritocrats. Meritocrats believe that some people deserve to receive economic benefits because of their efforts or the demands of the job. Equal opportunities are important—nobody should be at a disadvantage because of the circumstances of their birth or because of brute bad luck. There is no automatic entitlement to income or wealth. The well-off do not have an automatic obligation to support the worst-off. Efficiency is not the only criterion by which outcomes should be judged.

Everyone ought to have the same non-discriminatory access to positions and posts that come with economic advantages. A just society is characterised by equality of opportunity. No one should be disadvantaged from the start; no one should be discriminated against because of their gender, race, sexual orientation, economic background, or membership in some social group.

What individuals do with their opportunities is up to them; what is crucial from the standpoint of justice is that everyone’s opportunities be truly equal.

Some people deserve to receive certain economic advantages in light of their contribution, effort, experience, and the demands of the job. Some jobs require greater levels of effort than others, are more stressful than others, or more detrimental to health. Some jobs can only be performed by people who are appropriately qualified, or have the right level of experience.

It is fair that those who make a greater contribution to society, expend greater effort, or incur greater personal costs should earn a higher income. Pay should reflect contribution, effort, experience, and the demands of the job.

What this means will vary from society to society. Roughly speaking, to lead a dignified life is to have one’s basic needs met and to be able to meet and interact with other people at eye level. As long as some people do not have sufficient income to lead a decent life, it is just (fair) that income should be redistributed to them. But once everybody has enough, no further redistribution need take place.

Income should be distributed so as to make the worst-off members of a society as well off as possible. If everyone gets the same amount of income no matter what choices they make, no one will be bothered to work hard.

Redistributing income to make everyone equally well off will therefore make everybody equally miserable. Given human psychology, people are incentivised to work hard only if this comes with a proper reward. A just society is a society in which we tolerate whatever income inequality is necessary to make the worst off as well off as they can be.

The right distribution of income is that which leads to an efficient allocation of labour. Income is the price paid for labour. Market prices are neither just nor unjust. Under ideal conditions, market prices carry information about the relative scarcity of resources, thereby allowing us to allocate resources to where they can be put to their most valuable use.

It’s misguided to want to see that people are paid a “just wage”. We should try to see to it that wages are free from distortions, so that they carry information about relative scarcity.

Whatever income someone voluntarily pays to someone else is just. A just society is a society in which individuals are free to engage in whatever transactions they voluntarily choose to engage in. Forced redistribution from some to others is unjust.

Professor Alexander Pepper is professor of management practice at the London School of Economics.