If executive pay is to be brought under control, a different approach will be needed for remuneration committees and strategic planning. 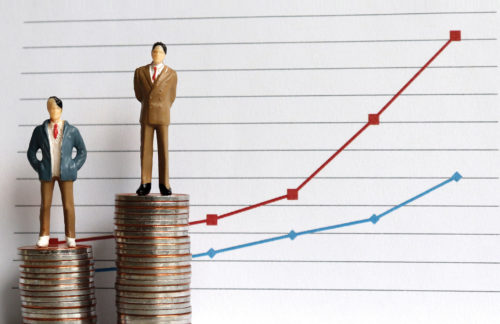 Finalising the reforms the following summer, business secretary Greg Clark echoed his boss, stating that “our standards of corporate governance have long been admired around the world”.

And then Stephen Hadrill, chief executive of the Financial Reporting Council, which oversees the implementation of the UK Corporate Governance Code, followed up by citing “the UK’s deserved reputation for good corporate governance”.

That policymakers and regulators hold our governance regime in such high esteem should be a source of pride for British businesses—specifically, our world-leading PR and lobbying industries, which have somehow managed to create this perception in the aftermath of the banking crisis; numerous bribery, market manipulation and mis-selling scandals; widespread failure to address pension deficits; and soaring levels of executive pay.

It’s worth bearing in mind that the average full-time UK worker receives a salary of £28,000, which is generally discontinued if they lose their job.

In recent months alone, we’ve seen the collapse of Carillion and Conviviality, the sudden expulsion of WPP CEO Sir Martin Sorrell under the shadow of misconduct allegations, and widely condemned eight and nine-figure incentive payments to the directors of Persimmon. It’s therefore unsurprising that however much politicians and civil servants celebrate standards of UK corporate governance, the public takes a less credulous view.

The Edelman Trust Barometer saw trust in business fall by two points in 2018 to 43%, while the proportion viewing CEOs as credible rose to 42%, but from a record low of 28% in 2017.

Ipsos Mori’s rival “veracity index” suggested that 36% trust business leaders to tell the truth. Our captains of industry are at least deemed more trustworthy than politicians (18%) and estate agents (27%) but fall well below trade union officials (45%), lawyers (51%) and the ordinary man or woman in the street (64%), never mind doctors and nurses (91% and 94% respectively).

The two most commonly cited reasons for distrust in business were their failure to pay their fair share of tax (cited by 56% of respondents) and the perception that executives are overpaid in comparison with ordinary workers (58%).

These sentiments are not hard to understand. The Persimmon case involved a cohort of senior managers enjoying a £500m bonus pool, including £110m allocated to CEO Jeff Fairburn. The payments were triggered thanks in part to the government’s Help to Buy scheme putting rocket boosters under their sales.

Conversely, at Carillion, Richard Howson—the CEO who had presided over the company’s collapse—still received pay of £1.5m in 2016 as the business model disintegrated, and was due to be paid his £660,000 salary until October 2018, by the terms of his departure last year.

As always, when considering this issue, it’s worth bearing in mind that the average full-time UK worker receives a salary of £28,000, which is generally discontinued if they lose their job.

The cases of Persimmon and Carillion are almost exact inversions of each other. At Persimmon, as mentioned above, the company’s success was undoubtedly due in huge part to the circumstances of the government’s intervention in the market through the Help to Buy scheme, yet the executives were spectacularly rewarded.

At Carillion, by contrast, the poor performance and ultimate implosion of the company must, at least in part, be attributed to its leaders and yet the CEO walks away having been paid millions of pounds over the course of his tenure.

Executives at banks bailed out by the taxpayer still got their bonuses and generous pension entitlements.

It is not hard to find other particularly egregious examples. Executives at banks bailed out by the taxpayer still got their bonuses and generous pension entitlements. Helge Lund received £5.5m and a £10m share award for less than a year’s work as BG’s chief executive after the company hired him at huge expense shortly before it was taken over by Shell.

And BP chief executive Bob Dudley received a $20m package in the year the company recorded its worst ever loss.

These cases are too commonplace to be dismissed as isolated examples of bad practice. CEO pay as a whole has for too long been subject to weak oversight, enabling pay awards far beyond what is necessary or proportionate to incentivise and reward good performance.

The average pay of a FTSE 100 CEO now hovers close to £5m. This figure is crystallised annually for the public on “Fat Cat Day”, usually occurring some time in the first week of January, when the money already made in that year by a top executive passes the amount that the average UK worker can expect to earn over the whole 12 months.

This ought to prompt particular reflection on the part of remuneration committees. Committee members must recognise that their individual decisions accumulate to create a public perception of business that risks doing damage to their long-term prospects. They should consider their priority objectives and outcomes from the perspectives of all stakeholders—including wider society—and the effect that organisational pay practices have on income inequality both within the company and throughout the economy.

A more diverse range of perspectives on remcos would help in this respect. They are currently dominated by highly-paid executives who are comfortable—probably overly comfortable—with very generous pay packages. Research from the TUC in 2015 found that the average FTSE 100 remco member (many of whom would only be undertaking non-executive roles) was paid nearly £450,000.

The High Pay Centre has been a long-standing advocate of mandatory representation for workers on remuneration committees. The government’s proposed changes to corporate governance structures offer alternative opportunities for reform. New innovations include the option to elect workers’ representatives to full boards, or introduce governance committees encompassing a range of stakeholder committees.

Remuneration committees will be required to consider pay throughout the organisation, as well as setting the executive pay policy and signing off final awards.

Ultimately, boards’ terror at the thought of losing their chief executive reflects a failure in their strategic planning.

The reforms are yet to be finalised, and allow considerable scope for companies to pay lip service to worker, customer and community perspectives while doing little to change their existing practices.

However, the most forward-thinking companies will see them as an opportunity to put a more balanced understanding of what constitutes sustainable success for the organisation from a range of stakeholder perspectives at the heart of their approach to pay and governance.

While this would bring about considerable social, ethical and reputational benefits, there is very little chance that it would do any harm to company performance.

Boards are far too uncritically accepting of the questionable notions that a) their executives will walk into other lucrative positions if they aren’t paid multi-million-pound pay packages; and b) irreversible damage would be done to the company if they did.

It seems highly unlikely that companies with hundreds of thousands of employees on multiple continents could be so dependent on a single individual or a handful of leading executives. In fact, whenever a major scandal occurs—think the BP oil spill in the gulf of Mexico, or GSK’s fines for bribing officials in China—the well-paid executives often claim to have known nothing about the particular case, and the size of the company is implied as an excuse.

Ultimately, boards’ terror at the thought of losing their chief executive reflects a failure in their strategic planning. The prestige, challenge and responsibility of running a major company make it an extremely desirable position. A pay package one-tenth of the current average for the FTSE 100 would enable a lifestyle beyond the wildest dreams of most people.

If boards as currently composed cannot deliver a plentiful supply of candidates without paying sums of money that threaten the legitimacy of the entire economic system, then it is time they opened up the job to those who can.

Luke Hildyard is director of the High Pay Centre.