Executive pay has become a core issue in corporate governance. As companies begin to act on excess, we ask what’s in store for pay in the future. 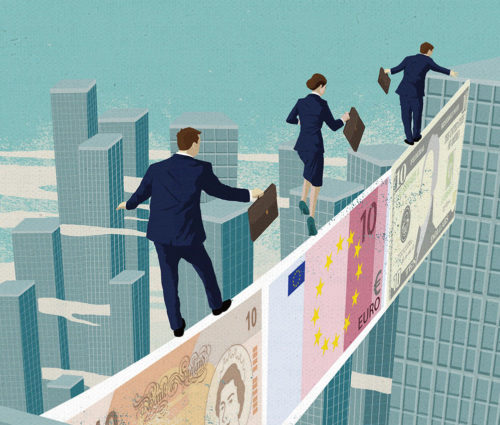 Investors, politicians, regulators and pressure groups are increasingly voicing concern about lavish executive pay packages, especially those that reward poor performance, and are urging companies to change a remuneration system that is clearly broken.

There is reason for concern. Bosses of blue-chip companies made more money in the first three working days of this year than a typical employee earns in the entire year, according to research by the High Pay Centre and the Chartered Institute of Personnel Development. Average annual pay of FTSE 100 chief executives is £4.5m, which is 120 times the £28,758 a typical UK worker earns.

Bosses’ pay fell slightly in 2016/17 but there are still huge gaps between the top and the rest of the workforce. Not surprisingly, 4 January 2018 has earned the name “Fat Cat Thursday”.

Several big institutional investors, such as Norway’s $1trn sovereign wealth fund, and the Church Investors’ Group, said recently that they will vote against exorbitant pay deals that are not transparent and justified at annual general meetings this year. State Street Global Advisers, the world’s third-largest asset manager, has warned it will not back excess, and will abstain from voting.

The European Union is taking steps to curb directors’ excessive pay through the revised Shareholder Rights Directive, which comes into force next year. The new rules will give shareholders a bigger say on pay at general meetings and shine a light on top compensation. The European Commission said the revised rules were triggered by high pay that is not justified by performance and has led to mistrust among shareholders and society at large.

France cracked down on pay last year, under the Sapin 2 law to curb excess. The legislation, which gives shareholders a right to vote on the remuneration policy of listed companies, follows political, shareholder and public outrage over huge pay packages awarded to chief executives such as Carlos Ghosn’s 2015 remuneration at state-backed Renault.

On the political front in the UK, prime minister Theresa May has attacked excessive boardroom remuneration, including companies that ignore shareholder concerns over pay which hugely outstrips performance. Such concerns mean that governance reforms aimed at curbing runaway remuneration are underway.

Pressure continues to build ahead of the round of spring annual general meetings, where pay, especially at FTSE 100 companies, will be one of the most hotly contested issues between boards and shareholders.

Catherine Howarth, CEO of ShareAction, which coordinates civil society activism to promote responsible investment across Europe, says there is only one way to curb pay excess. “It needs CEOs leading big companies to say they will take a pay cut and change the culture. Until this happens nothing will shift.”

She says chief executives are reluctant to take a pay cut because they feel ashamed if they earn less than their peers. Howarth believes that this must change and that “other CEOs need to celebrate those who have taken a pay cut and follow their example. They should be recognised by the public as heroes.”

“If a potential CEO is asking for too much, the response should be ‘Cheerio—good luck with the rest of your career’”.

A few have taken the step. Richard Pennycook, former CEO of the
Co-op Group, took a 60% pay cut in 2016, after the hard work of rebuilding the company was underway. John Cryan, the recently departed CEO of Deutsche Bank, famously said he was not motivated by pay and took a 10% pay cut to €3.4m in 2017. Other top executives at the bank waived their bonuses amid a run of three years of annual losses.

Deutsche Bank came under fire from investors in February though when the bonus pool for 2017 more than quadrupled, in spite of losses, as the board returned to paying bonuses.

Last year, US asset manager BlackRock toughened its position on pay, calling for companies to restrict CEOs’ lavish pension packages and end pay that far outstrips ordinary workers. This year, Larry Fink, BlackRock’s chief executive, called for companies to have a social purpose, not just a financial one.

Pressure from fund managers is having some effect. Top executives at Persimmon, the FTSE 100 house-builder, are reducing their bonuses this year after several big asset managers criticised their huge pay hikes. Weir, a FTSE 250 engineering group, plans to break ground this year by cutting share awards in half and axing long-term incentive plans, after the company lost a binding vote on pay two years ago.

Voting against chairs of remuneration committees at annual meetings is also building up. The Pension and Lifetime Savings Association, and several big asset managers, believe this line of action is a more effective curb than voting against pay policies. 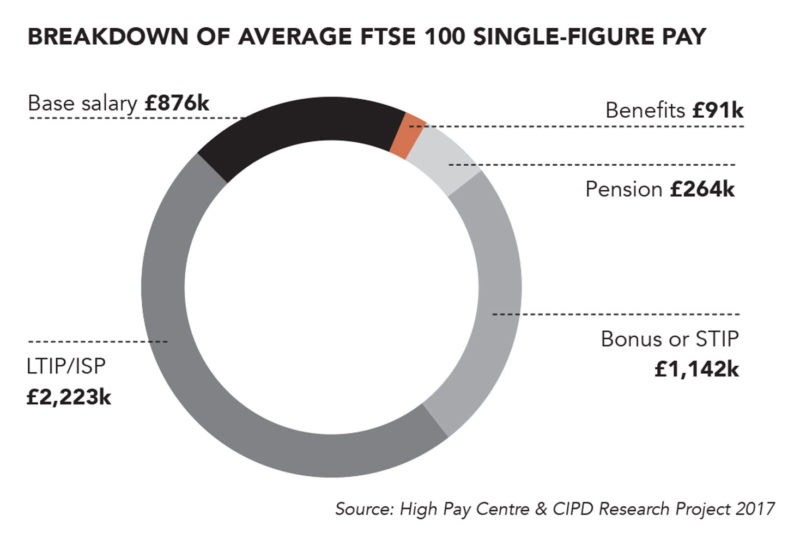 Remuneration committees certainly need to be “tougher and braver” to manage excess, says Stefan Stern, former director of the High Pay Centre. “If a potential CEO is asking for too much, the response should be ‘Cheerio—good luck with the rest of your career’”. Stern pinpoints the “vast variable payments” of bonuses as the biggest problem in boardroom excess. One of the variables, the long-term incentive plans (LTIPs), plays a large part in driving up executive pay. “LTIPs should be scrapped, and base pay should rise if necessary,” Stern says.

A fundamental shift in the complex structure of executive pay packages is needed to challenge the level of overall remuneration paid to some executives, according to Hermes Investment Management.

“We need simpler pay schemes,” says Leon Kalmi, head of responsibility at Hermes. “Some companies tend to over-engineer the structure of pay packets. There are several different performance schemes so it means that one of them is likely to deliver even if the company has not done well.” He also believes that fixed pay should be increased and the variables in the pay package reduced.

One of the biggest sticking points for shareholders and wider stakeholders is that lavish pay packages continue to be rewarded by some boards when companies are underperforming. One way to prevent this is to ensure that the overall remuneration package rewards good performance and penalises poor performance, says Fiona Reynolds, CEO of the UN-supported Principles of Responsible Investment network.

Research from Lancaster University Management School in 2016 disproved prevailing board thinking that big bonuses lead to value creation, and found a “negligible” link between CEO pay and good company performance. However, many boards believe that curbing bosses’ pay would hinder top-end recruitment when rivals are paying big money.

Can a board attract top-performing executives without big rewards? “Yes, many studies have shown that high salaries in themselves do not necessarily mean the company will end up with the best chief executive,” explains Reynolds. She believes that “many CEO candidates are motivated by factors beyond pay packages”.

Motivation for doing a top job can include many factors such as job satisfaction, attraction to a company’s purpose and culture, the challenge of leading a business in a new direction, or a company’s track record on achieving environmental, social and governance goals. Stern says that incentives should certainly include wanting to do a good job, building or enhancing reputation, leaving a strong legacy, and finding a number of possible successors. “It should not all be about money.”

Boards should consider the results of research into bosses’ pay by Brussels-based Vlerick Business School. The 2016 study, which examined 861 companies across Europe, revealed that the best-performing companies pay their bosses relatively less than their peers. It also revealed that the proportion of variable remuneration was lower as well as the pay ratio between top executives and average workers.

As scrutiny and reforms rise, perhaps companies will start to call time on excessive pay?

Shaking up bonuses, such as lengthening the time shares in executive packages are held, from three to five years, are part of the proposals. UK-quoted companies will also be required to publish and justify the pay ratios between bosses and average workers later this year.

Another part of governance reforms to curb pay is the launch of a first-ever public register of UK-listed companies that have had significant shareholder rebellions. The register, set up by the Investment Association at the end of last year, names companies where one-fifth of investors opposed annual pay.

Named companies are required to explain how they are tackling the problem. The move is expected to bring some transparency to boardroom pay deals and change decision-making.

As scrutiny and reforms rise, perhaps companies will start to call time on excessive pay? Pay experts and observers are cautious and expect some slightly improved board behaviour—but bad practice too. Sarah Wilson, CEO of Manifest, the proxy voting agency, says it depends on how much boards have listened to shareholders and other stakeholders about the need to connect corporate success to longer-term objectives.

“Ultimately it is in everyone’s interests for companies to be successful, but excessive executive pay is just bad value for everyone.”

Passed in December 2016, the Sapin II laws in France are described by many commentators as having introduced one of the most stringent regimes for executives anywhere in the world.

Though executive pay has been hotly debated in France for many years, Sapin II is widely seen as being prompted by controversy over the pay of Renault chief executive Carlos Ghosn in the spring of 2016, when his remuneration only received the backing of 45% of shareholders but was, nevertheless, approved by the board.

In a blog for the Oxford Faculty of Law, Professor Alain Pietrancosta describes the French approach as “rather unique” and that it stands accused of being “excessively rigid and a new manifestation of needless red tape.”

Pietrancosta adds that the “strong stance taken by the French lawmaker expresses a political choice that is hard to challenge on the grounds of legitimacy, although the disputed evidence of the economic efficiency of the say-on-pay tool weakens the case for such a stringent legal regime.”