Pushing a particular formula for getting more women onto boards is a surefire way to narrow the conversation and slow progress, argues Catherine Banat. 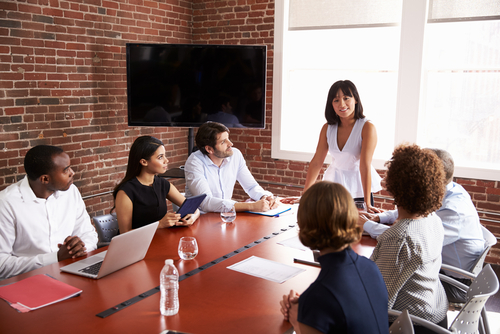 With proponents of board diversity now firmly in the majority, it’s time for companies to deliver.

A recent survey by Royal Bank of Canada Global Asset Management (RBC GAM) found that three-quarters of investors in the US, Europe and Canada think that gender equality on boards is important. But figuring out how to turn that sentiment into executive action is no simple task.

Companies ultimately need to figure out their own path, but investors, advisers and advocates are crucial to guiding boardrooms in the right direction.

The most important thing that needs to be done right now is to get as many corporate leaders to join the conversation as possible. At the heart of the fight for board diversity is the belief that a range of ideas, coming from a leadership team that reflects the composition of employees and customers, will lead to better decisions. This same idea should be applied to the task of facilitating diversity itself.

Companies ultimately need to figure out their own path, but investors, advisers and advocates are crucial to guiding boardrooms in the right direction. Creating forums for collaboration, connecting managers with qualified candidates, sharing best practices, compiling data and formulating appeals to common sense are all integral in the campaign toward self-perpetuating gender parity.

The RBC GAM findings illustrate the futility of seeking a single solution to board diversity. In Europe, government regulations setting quotas for female board membership have been effective and remain relatively popular.

Attempting to graft European-style regulations onto US companies would most likely be deeply unpopular, and almost certainly unsuccessful, which is why organisations and investors are seeking to engage US companies directly.

Between January and June of 2017, there were 14 shareholder proposals regarding board diversity brought to a vote by Russell 3000 companies. That’s up from just six during the same period in 2016, according to a report from the Conference Board.

Just as importantly, hundreds of organisations and individuals are building an ecosystem to support companies that are actively promoting diversity—by mentoring female leaders, creating professional networks, holding events to celebrate success, and showing that diversity is tied to financial success and positive public relations.

We are also learning important lessons along the way. In response to a series of discrimination lawsuits in the financial industry in the 1990s and 2000s, Wall Street firms expanded traditional methods of diversity training and hiring practices—programmes that serve mostly to show that the issue is being addressed, even if they aren’t getting results.

In an article for the Harvard Business Review, researchers analysed 30 years-worth of records from hundreds of US firms. “We’ve seen that companies get better results when they ease up on the control tactics,” the authors wrote of diversity programmes.

There is broad agreement that greater diversity at the top of companies improves decision-making and helps attract more talented candidates throughout the organisation.

For some executives, the value of diversity may be self-evident, but others will insist on seeing the numbers before taking action. Available data is somewhat inconclusive, but there is a near consensus that a more diverse board has, at worst, a neutral impact on performance.

And there is broad agreement that greater diversity at the top of companies improves decision-making and helps attract more talented candidates throughout the organisation.

Another important trend is the increasing integration of environment, social and governance (ESG) indicators in investment decisions. Many investors are recognising that an analysis of financial performance alone is not enough to assess and mitigate long-term risk. Among the investors surveyed by RBC GAM, two-thirds said they were now integrating ESG factors into their investment approach.

The missing piece for many investors when it comes to ESG is corporate disclosure. Responses to the RBC GAM survey indicated that for investors who employ ESG criteria, a majority across all regions are not satisfied with the level of reporting provided by companies.

Ideally, forward-thinking executives will increasingly recognise that the resources required for tracking, reporting and improving ESG indicators will pay off by placing them in a stronger position to profit from shifting market demands.

But common sense still must be a central part of the conversation. Consider, for example, what the auto industry would look like today if more women had been in leadership positions over the last few decades. Would we have had to wait until the 1990s to see car commercials targeted at women?

Would companies with overwhelmingly female customer bases have taken so long to adjust their advertising campaigns if more women had been in on the decision-making process?

There was a time when sceptics could justifiably claim that a scarcity of qualified female candidates made gender equality impossible without sacrificing quality. Those days are over.

Despite all of the activity surrounding gender diversity, progress has been slow. But that’s to be expected when working toward fundamental change at the world’s biggest companies.

On the other hand, we are in an era of rapid change, and irrefutable progress is being made: the percentage of women on Fortune 500 boards has grown from 16.4% in 2011 to 22.2% last year. As this continues to rise, and more women have a seat at the table, the pace will inevitably pick up.

There was a time when sceptics could justifiably claim that a scarcity of qualified female candidates made gender equality impossible without sacrificing quality. Those days are over. No reasonable person expects change to happen overnight, but companies are now expected—and increasingly obligated—to demonstrate their efforts toward gender balance.

Failing to do so is not only socially irresponsible, it’s bad business.

Catherine Banat is responsible for servicing RBC GAM’s impact investing clients. She has dedicated her career to the financial services industry and has held senior level positions at various firms.