Research shows an improvement in public opinion on ethical business behaviour. But is business really behaving more ethically, or does it just appear more favourable when compared with other scandal-hit sectors? 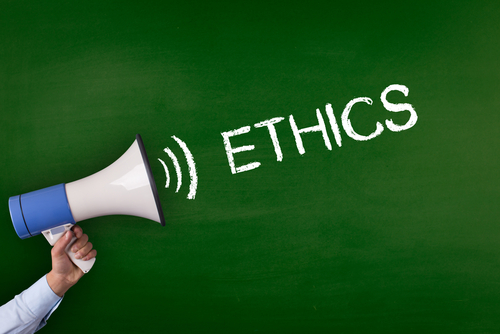 Since the survey began in 2003, the British public’s opinion has consistently leaned further towards judging business as behaving “ethically” than “not ethically”.

More than half (52%) now say they consider that business behaves ethically—a slight recovery from the dramatic dive to 48% last year, but not yet back up to 2015 levels (59%).

The strength of negative opinion is also decreasing, with fewer people now saying that business behaves “not at all ethically” (down from 9% in 2012 to 5% in 2017).

Since the survey began in 2003, the British public’s opinion has consistently leaned further towards judging business as behaving “ethically” than “not ethically”. However, last year, public opinion fell significantly, down 11 percentage points compared with 2015.

The effects of scandal in other sectors

Although this recovery is encouraging, it may be that business is positively benefiting from the scandals that have hit other sectors, such as American politics, Hollywood, Westminster and football. By contrast, business may be appearing more responsible in the eyes of the public.

Although some of these scandals broke after the survey took place, the groundswell of public opinion had already begun. In fact, the Edelman Trust Barometer, a global trust survey which appears at the beginning of the year, indicated that public trust in politicians and the government in the UK had plummeted, with 60% believing that the system was failing them.

This “#MeToo effect” ties in with another annual survey: the Ipsos MORI Veracity Index, which examines whether the public trusts different professions to tell the truth. This year, business leaders are not among the five least-trusted professions for once, with 36% trusting them to tell the truth (as opposed to 33% last year). Professional footballers (26%) are among the least-trusted for the first time and, perhaps unsurprisingly, politicians remain at the bottom, with 78% distrusting them.

In fact, trust in business leaders has improved by 11 percentage points since the survey began in 1983.

Is business benefiting from the scandals that have affected other institutions in society over the course of 2017? Or is it actually behaving more ethically?

It is difficult to say definitively. However, looking at our wider research helps to understand this. The IBE’s triennial survey of employees (due to be conducted again next year) indicates that employees have high levels of trust in their own employers. Eighty-one percent said that honesty is practised “always/frequently” in their workplaces, and only 8% have felt pressure to compromise ethical standards. People seem happy enough with their own employers and the local businesses they interact with face to face.

It may be, therefore, that “faceless institutions” and “big business” are seen as exploiting customers and the public. The IBE’s survey shows that corporate tax avoidance and executive pay remain the top public concerns in 2017, despite fewer prominent headlines on these topics than last year. Evidently, business is still not doing enough to address these ethical issues in the public’s eyes.

Tax avoidance has been one of the top-two issues since it was first introduced in the survey in 2012, with 38% considering this an issue that needs to be addressed—down from 43% last year. Tax is a difficult and complex issue, but it isn’t going away and the Paradise and Panama Papers have thrown this issue even more into the spotlight.

Companies need to do more to address public concern and communicate the circumstances behind the tax positions they decide to take. It is important to remember that in most instances, the reported actions were not actually illegal (tax evasion). Instead they were tax-avoidance techniques, considered by the public to be unacceptable.

Although there has been some positive activity regarding executive pay structures, such as giving shareholders a binding vote on proposed pay packages, it will still take time to move the dial. Naturally, public perception is that the changes are not quick enough, with 30% of the public thinking this still needs to be addressed (up from 28% last year). Publication of gender pay gaps will do little to improve public opinion until they start to see improvements.

While the public may be seeing business in a more positive light, due in part by the glare of negative publicity in other sectors, this may be short-lived if business doesn’t start to openly address these fundamental issues which have been troubling the British public for too long.

With trust in other sectors at an all-time low, business needs to start leading from the front.

Daniel Johnson is head of project services at the Institute of Business Ethics.