Proposed new governance code broadly welcomed for emphasis on corporate culture and strengthening shareholders’ and workers’ voices, but there is a call for more to be done on executive pay. 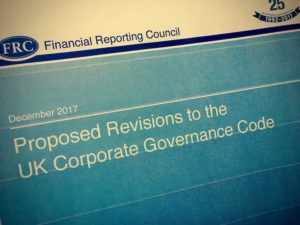 The Financial Reporting Council’s proposed revision of the UK’s Corporate Governance Code has been met with a broad welcome, though there are suggestions it could have gone further on executive pay.

The High Pay Centre welcomed the revision, which sees deliberate emphasis on the interests of “stakeholders”, but suggested more work is needed on long-term incentive plans (LTIPs).

Stefan Stern, director of the High Pay Centre, said: “The emphasis on involving the views of the workforce and recognising the interests of stakeholders is welcome. ‘Shareholder primacy’ is still a misguided and too narrow a guiding mission for business.

“No incentive plan which pays out after five years should be labelled ‘long term’. But insisting on a five rather than three-year period for such schemes is a modest improvement.

“LTIPs remain a flawed instrument which should be dropped, however.”

“LTIPs remain a flawed instrument which should be dropped…”

The Confederation of British Industry (CBI), a leading business body, lauded the code’s focus on the independence of non-executive directors, and the appeal to stakeholder interests.

Carolyn Fairbairn, CBI director-general, said: “The proposed revisions to the code including stronger emphasis on independence, setting pay in the context of company-wide pay, and putting more importance on how companies engage with all their stakeholders are all positive steps.

“Some companies may find these changes challenging at first, but ultimately they are the right thing to do.

“What’s now critical is getting the details of this revision right to ensure the UK retains its reputation as an attractive place to invest and do business. The CBI will now work with member companies to identify opportunities to further strengthen and refine the revised code.”

Investors welcomed the revision’s new focus on boosting the shareholder voice by introducing new reporting demands if 20% of shareholders vote against a resolution at annual general meetings.

“It makes sense for the code itself to be focused on the principles of good governance and the issues on which there is the most pressing need for attention, such as integrity, corporate culture and listening to stakeholders.”

“It is important that the governance code responds to these challenges so that the UK remains globally competitive and that investor stewardship continues as a key tenet.

“We particularly welcome the revision to the code which requires companies, within six months of having received a high vote against a resolution, to publish a response explaining how they are responding to their shareholders. This revision is timely considering the forthcoming launch of the Public Register, hosted by the IA, which will incorporate the responses from such companies.”

ICSA: The Governance Institute—the professional body for company secretaries—said the draft code was right to focus on culture.

Simon Osborne, ICSA chief executive, said: “Companies must never make the mistake of overlooking the essentials, such as the need for the board to have the information and support necessary to operate effectively.

“However, it makes sense for the code itself to be focused on the principles of good governance and the issues on which there is the most pressing need for attention, such as integrity, corporate culture and listening to stakeholders. ICSA’s recent guidance on how to get the stakeholder voice into the boardroom, produced jointly with the Investment Association, complements this new approach.”