The UK’s comply-or-explain system of corporate governance, introduced in 1992, has been widely admired and imitated, but it’s not without its critics; there is room for improvement, while retaining the Code’s spirit of flexibility. 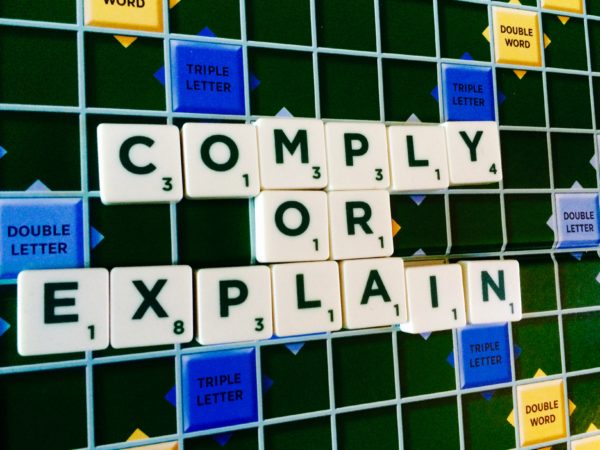 In 1992, the Cadbury Report introduced, for the first time to the UK, a corporate governance Code of Best Practice. The report required companies to state whether they comply with the Code and to give reasons for any areas of non-compliance.

The comply-or-explain system is premised on the inflexibility of a “one-size-fits-all” approach and introduces some flexibility for companies. Companies not complying with corporate governance code provisions are required to provide explanations.

However, comply-or-explain has its critics. There is a continuing debate as to whether the voluntary nature of the system really works. The quality of explanations has been widely criticised as being “perfunctory”, “incomplete” or even “inexistent”.

What constitutes a good explanation?

What is meant by the term “explanation”? Explanations are more than the mere offering of information. They occur whenever attention moves beyond information to matters of meaning, relationships, causes, factors and reasons. Explanations are likely to be deficient if they fail to hang together.

Explanations are likely to be deficient if they fail to hang together.

In effect, explanations need to be customised and bespoke to companies’ specific contexts. The 2008 Combined Code and the 2010 UK Corporate Governance Code specified that explanations should be “careful and clear”, and should illustrate how companies’ actual practices are consistent with the principle underlying the Code.

Finally, in 2012, the Financial Reporting Council (FRC) introduced the notion of “convincing” explanations.

What is a convincing explanation?

By requiring explanations to be “convincing”, the FRC positioned them as rhetorical devices. Rhetoric is the art of writing/speaking in a manner that persuades or impresses an audience. Thus, in crafting their explanations, non-compliant companies may be more likely to use rhetoric, to persuade shareholders to concur with their explanation, by providing meaningful, convincing rationales.

Persuasive and convincing explanations are critical to the legitimacy and effectiveness of the comply-or-explain system.

The purpose of an explanation is to provide a meaningful and convincing justification to show that, despite non-compliance, the company has a full and robust system of governance, equivalent to fully compliant companies.

Explanations should be such that readers are convinced that the company’s system of governance is equivalent to that proposed by the Code.

Absence of guidance and oversight

The FRC relies on investors to exercise their power by acting as monitors of the comply-or-explain system. The financial watchdog says that shareholders have every right to challenge companies’ explanations if they are unconvincing, and for there to be dialogue between company management and shareholders.

We question the FRC’s assumptions that institutional investors will exercise their power in monitoring the quality of explanations.

We question the FRC’s assumptions that institutional investors will exercise their power in monitoring the quality of explanations. Research finds that shareholders have limited monitoring capabilities and are apathetic, even when companies provide insufficient explanation for non-compliance.

As a result, low shareholder engagement perpetuates poor-quality explanations. Given the weak monitoring by shareholders of the comply-or-explain system, we recommend that the FRC establishes an oversight body, similar to the Financial Reporting Review Panel which oversees the quality of financial statements, with monitoring powers over the quality of non-compliance explanations.

It is important for the UK, as the originator of the Cadbury Code comply-or-explain system, to maintain its competitive edge. At present, investors are left to resolve issues with companies. The system depends on institutional investors to speak up but there is ample evidence that they don’t.

If the UK Code is to remain a world leader, the FRC needs to review how the comply-or-explain system can work better.

If views persist that the quality of explanations is poor, there may be pressure to move to a “comply-or-else” system of corporate governance. Such a direction could have unintended consequences.

Let us not take that road. We owe it to the creators of the comply-or-explain system to do it better. Those early pioneers shone a light, which we need to keep burning brightly in company boardrooms.