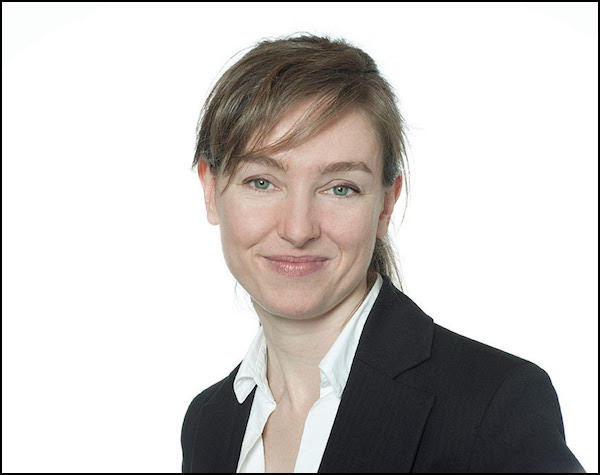 Mention the phrase “corporate responsibility” and most people in the know will immediately think of AXA, the world’s largest insurance company.

Alice Steenland, the company’s chief corporate responsibility officer, says environmental, social and governance issues have a “very special” role at the heart of the French giant.

When you look at the organisation’s track record, it should come as no surprise. AXA and Steenland have been in the vanguard of ensuring that responsible practices are at the heart of business.

The company’s mission is to “empower people to live better lives”. AXA is the investment manager that first divested from coal. The business has also divested from the tobacco industry and was recently part of a drive calling on investors to speak out about the cost to society of tobacco.

“AXA is not just a payer of claims, but is a partner for customers and more broadly for society.”

And when G20 global leaders set up a task force to provide advice on climate change risk disclosures, the company was part of the inner circle developing guidance that emerged last year.

If anyone can comment on the way business has responded to demands for a little more societal purpose into their activities, it is AXA.

The company’s involvement in issues like climate change makes a lot of sense. Steenland points out that the “business case” for corporate social responsibility is well and truly established, with evidence of advantages for employees and for brand value. As an insurer, AXA sells “trust”, she says, and because of its intangible nature, and the fact that providing insurance is a “quasi social role”, the company has to be highly attuned to what reflects that characteristic for consumers.

“AXA is not just a payer of claims,” Steenland says, “but is a partner for customers and more broadly for society. So, there’s clearly a role for this sort of corporate responsibility and sustainability within the strategy.”

The strategy she refers to is Ambition 2020, AXA’s statement on what its focus will be for the next few years. That’s where the “empower people to live better lives” mission comes in, and it also declares the company’s aim to target health improvements or societal issues such as climate change. Hence the recent campaign against tobacco, launched poignantly on World Tobacco Day at the end of May.

The tobacco campaign saw AXA up the responsible business ante somewhat by becoming more vocal and more public about its policy decisions. Steenland says that was deliberate, and stemmed from what the company learned when it divested from coal. Speaking out creates peer pressure, and companies respond—in the case of coal by following AXA’s lead.

But grabbing public attention can have another effect too, one which speaks volumes about the influence of business in the arena of ESG.

“It also has an impact on government and policy because when rational economics, in this case a business, says ‘this is no longer of interest to us’, that’s a very interesting message,” says Steenland. “That’s not the same message when it comes from an activist group.”

The same cannot be said for Donald Trump, who has withdrawn the US from the Paris climate agreement. Steenland, an American, airs her disappointment and observes that some countries are “moving backwards” on climate change.

“It’s a pretty impressive journey we’re on right now. No one would have thought companies would be so vocal a year ago.”

And yet there is some optimism here too because Trump’s decision throws into stark relief the fact that action on climate change is now being driven from the bottom up. US corporate leaders have been lining up to declare their intention to continue cutting carbon emissions. And many local politicians have declared that they will stand by climate change policies.

“What you see in the US and around the world is that a large number of companies have done their analysis and have decided that [climate change] action is actually going to bring them either more savings or revenues over time than inaction will.

“In a sense, that train has left the station,” says Steenland emphatically, making the point that it is no longer the “geopolitical context”—the political leaders and legislators—making the difference but company managers and investors driven by customer and stakeholder sentiment.

“It’s a pretty impressive journey we’re on right now. No one would have thought companies would be so vocal a year ago,” she adds.

Of course, Trump’s decision makes it a priority that the action on climate change and other ESG issues is continued, and that corporate leaders speak out about them. Steenland says that the need to be public is what lay behind AXA’s tobacco campaign.

“Clearly, that is part of the way we think of corporate responsibility, and it’s something we’ve found to be effective.”

Another point is what AXA intends to do with the assets it manages. The Ambition 2020 project will see the French firm triple its green investment over the next couple of years; this will use AXA’s influence to change the way companies interact with society and the environment.

Indeed AXA recently won an award for the methodologies it had developed to measure climate risk within its portfolio.

Steenland says: “We have a strong history in this area.” She explains that investors work with sustainable measurement for two reasons: to consider portfolio risks, and to effect the way executives consider their risks when it comes to accessing capital.

“When a big player like AXA says, ‘we’re pulling out of the coal industry’, and then a lot of other mainstream financial investors follow suit, that sends a very strong message to industry and to politicians in terms of regulation,” Steenland says.

Companies are listening, though Steenland observes that there is still work to do.

“[Companies] are changing. Is it fast enough? I don’t think so, but everybody has their role to play.

“Governments and regulators have a strong role. Investors can put pressure on. Employees and activists can put on additional pressure, and every part of that puzzle is important.

“Are we living in a perfectly sustainable world today? No, but are our large listed companies sensitive to this issue and aware of their environmental and social impact? I would say in most cases, yes.”

Steenland rattles off a list of measures that could help companies move faster and achieve more on these issues, including voluntary reporting, peer pressure—and then there is the law.

“One of the reasons so many investors in France are active on climate within their portfolios is because France is the first country to pass legislation requiring them to report on that risk.

“These are mechanisms that oftentimes companies don’t like because they’re heavy in terms of reporting, but they do change things and they do get people to understand some of these issues.”

“These are mechanisms that oftentimes companies don’t like because they’re heavy in terms of reporting, but they do change things and they do get people to understand some of these issues.”

This year has seen AXA make a step change in its own reporting. After building a reputation for sustainable policies over a number of years the company has reported for the first time using integrated reporting. The company is “very proud” of its report, though Steenland points out that this is bringing reporting into line with practice rather than the other way round, as many companies experience.

However, it is still producing benefits, she says. The company is now looking at how it can translate its reputation as the leading sustainability investor into access to capital. That means turning that brand facet into indicators and KPIs.

“Integrated reporting is an ongoing process,” says Steenland. “You never finish being integrated.”