Alex Gersh, finance director of Paddy Power Betfair, discusses the challenges of Brexit and the company merger, and states the importance of responsible corporate citizenship and board transparency.

Don’t ask Alex Gersh about his betting record. The 53-year-old finance director of Paddy Power Betfair doesn’t gamble much—his first ever flutter was when he joined the company four and a half years ago.

And when he did bet on the two most tumultuous events of the past few decades—the Brexit vote and the US election—he lost money both times.

He admits this with a big laugh: “I went with the received wisdom and bet on Remain and Hillary Clinton. Wrong.

“But there is a way that everyone can make money, even when you are going to lose, and that’s by trading in and out of the odds so you can minimise your risk.”

Betfair also got the Trump result wrong. The betting giant lost £5m on the US election outcome, which attracted £220m of bets (in bets against the online exchange, either the customer wins or Betfair loses). Luckily, it didn’t lose on Brexit because gamblers who placed £127m on the vote did so by betting against each other on the Betfair exchange, which means it always wins.

Getting Paddy Power Betfair positioned perfectly ahead of Brexit is not such a sure bet though.

Gersh says: “I’m going to quote Dick Cheney, who said: ‘There are known unknowns, and unknown unknowns.’ There are two major implications for us: one is beneficial and the other an unknown.

“The lower pound against sterling and the euro is helping us as we have a lot of business in the US, Europe and Australia. Our results are already showing the positive effects of sterling’s fall.”

How customers react to any downturn in the economy is the big unknown, he says. “It’s impossible to predict what will happen to consumer spending after Brexit. But we are in a very good position to cope as we continue to run our business very efficiently, and should be able to withstand any downturn in spending.”

It helps too that the group has several different brands spread across its four million customers: the online Betfair platform, for example, appeals to the regular and more sophisticated sports betters, while those who punt with Paddy Power do so more for fun.

Well, hopefully for fun. For many, gambling can be a dangerous addiction, one that the group takes extremely seriously. “We do not want problem gamblers any more than anyone else. It’s not good for them or for our reputation if we have people gambling who are vulnerable.”

What’s more, Gersh says he would not be able to sleep at night if he thought the betting giant was responsible for people gambling irresponsibly.

“I have two young sons. I am aware that they might want to gamble one day so I want to know they would be protected from gambling’s excesses. It’s a perfectly good pastime but, like everything in life, it should be done in moderation.”

That’s why he says that the issue of problem gambling, underage gambling and money-laundering are raised at every single board meeting. The board feels the same way, he says. “We all have children, family and friends that we care about and I don’t think any of us would be able to sleep at night if we thought people were being harmed by what we are doing.”

“We all have children, family and friends that we care about and I don’t think any of us would be able to sleep at night if we thought people were being harmed by what we are doing.”

He continues: “The research shows that there is no real increase in problem gambling over the last few decades. But we are never complacent. We are constantly vigilant about the problem and always asking ourselves what more can be done. We don’t look at the global industry but what PPB [Paddy Power Betfair] can do to help prevent this, and in some cases, punish staff if we find that policing is not being properly carried out.”

The gambling giant has many remedies in place to make it harder for punters to lose their heads or their homes. Staff in Paddy Power’s 347 shops are trained to spot people who are behaving recklessly, particularly on the FOBT (fixed odds betting terminal) gambling machines, where people can lose £100 every 20 seconds.

Ironically, it was Paddy Power’s former chairman, Stewart Kenny, who once described the machines as the “crack cocaine” of gambling when he lobbied government many years ago to stop them because of the dangers.

At Betfair, there are 400 customer service agents who are trained to track down and monitor their clients, and if they spot problems, to talk directly to them.

“There are certain clues to follow in spotting problem gamblers,” explains Gersh. “Is there a sudden change in behaviour or patterns of betting? Is it late at night and are the amounts more than usual?

“Our agents will ask if they’ve been drinking, and whether they really want to be taking these gambles. Being a good corporate citizen is essential to us in every respect of the business. We are not just here to produce cash for shareholders.” 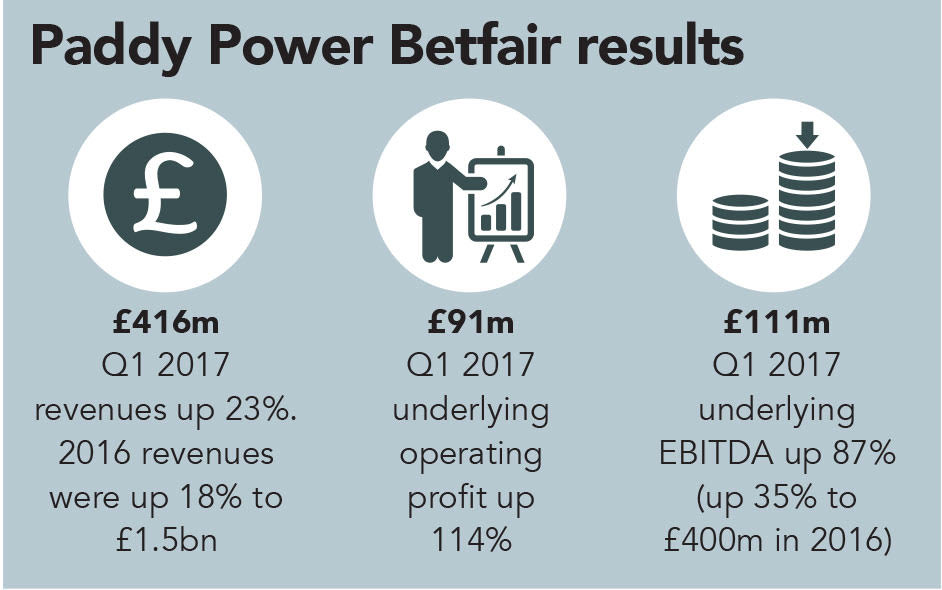 Being a “good corporate citizen” is a phrase that Gersh uses often, one which he says is not just PR speak or spin, but a serious and wider ambition. So what does he mean by it?

“First of all, I don’t take the view that business is bad. Most businessmen and women care deeply about the wider society they work in, and they want to be doing something positive for society. For me, it’s about paying taxes that are due so that we are supporting the public services and, therefore, the people of this country.

“It’s about following industry regulations, which for us is terribly important as we work only in regulated markets. And it’s also about having a happy and stable workforce. Having a good culture is important to us, particularly after the merger.”

By far the biggest challenge of Gersh’s career has been the merger between Betfair and Paddy Power, in February last year. As Betfair’s finance director, Gersh was one of the architects of the deal that created one of the world’s biggest gambling giants.

Now valued at £7.4bn on the stock market, PPB employs more than 7,000 people in 16 locations around the world, from Los Angeles to Dublin. Not a bad play.

And not always an easy one. “Any merger—and this was a merger and not a takeover—is difficult and has its own problems. I am the first to say we have made mistakes, and we are still learning.”

He explains: “Soon after the merger, morale was low in Dublin, [at] the HQ of Paddy Power, and in Hammersmith, where Betfair has its HQ. And it was down to the uncertainty created by the merger. People wanted to know who was going to be in the senior management team, and who was going to do what. That sort of thing.”

They moved fast to get morale going again. “Breon Corcoran [the group’s CEO] saw what was happening, and moved quickly. He appointed a senior team—about 50-50 from each group—to remove the uncertainty. He also told us all to not to sit around and wait, but to get people working together.”

“Breon [the Group’s CEO] has a low-ego policy and doesn’t tolerate anyone feeling bigger or more important than the other, or one department, like HR, winning out. None of that nonsense. All together or nothing.”

It was a critical moment. Gersh continues: “Breon has a low-ego policy and doesn’t tolerate anyone feeling bigger or more important than the other, or one department, like HR, winning out. None of that nonsense. All together or nothing.”

The board takes a similar attitude. “Our chairman, Gary McGann, is very inclusive and always open. We debate everything and everyone has access to the same information—I give the same management pack to the board as I do to everyone else.”

He adds that the independent directors are “fantastic, always challenging and providing us with new perspectives. There is great transparency and that’s because of the way the board is run so openly.”

Although there have been heavy job losses and efficiency savings since the merger, Gersh is not addicted to the scalpel.

“I’ve always said you can’t cut your way to prosperity. EBITA [earnings before interest, taxes and amortization] grew by 35 percent last year and the business was very efficient, having made savings of £65m over two years. At the same time, we are ensuring value for our customers and continuing to grow.”

Right now, says Gersh, the company is investing heavily in marketing and new technologies such as voice recognition to improve services to customers. “There are around 1,000 software engineers and tech people working on bringing together the two platforms and building a new system that is different from our competitors.

“We like to have a competitive gap with our rivals, and that means constantly investing.”

Gersh may not be a natural gambler but the US-British dual national of Russian-Jewish origin owes everything to a big bet taken by his parents when he was 13.

“We were living in St Petersburg—then Leningrad—eight families in an apartment with one room each. We all shared a bathroom and kitchen.”

This was 1979 when the US and Russian leaders signed the SALT II Treaty, designed to lower the nuclear weapons held by the superpowers, but which also allowed for a number of Jews to emigrate to the US. His engineer father and librarian mother applied to leave, getting the go-ahead with only a month to pack up and the equivalent of £100 to take with them.

“They made it to New York where I grew up,” Gersh explains. “Can’t you tell? My accent is still Russian-New York. My parents both worked and it wasn’t long before we had our own house.

“I’m a huge fan of the US spirit of inclusiveness and will be eternally grateful to the chances we were given. That incredible spirit of improving your life is still there, even with Trump. It’s still the best country in the world,” he says, laughing again.

“Of course, Britain is the second-best and my second home. I was a big Remainer and hope we get a good deal.”

Gersh’s early career was spent with Ernst & Young. He is a qualified certified public accountant.

Maggie Pagano is a business journalist who writes for The Times, the Daily Mail and Financial News.