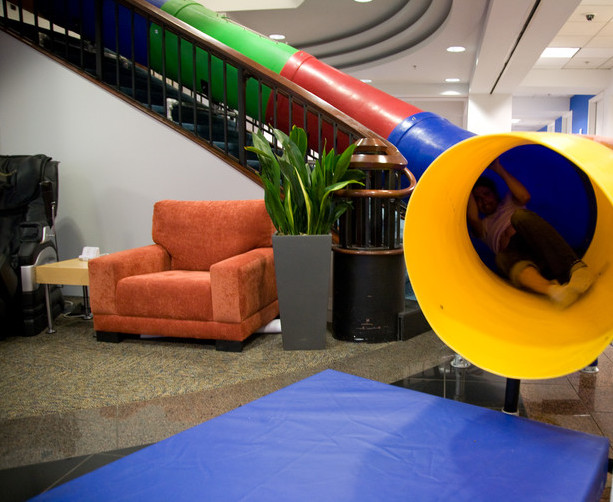 Office perks like slides down stairs may not be the best way to motivate good behaviour. Photo: Scott Beale/Flickr, CC BY-NC-ND

Research shows that when it comes to cognitive tasks, like decision-making, paying people more can lead to worse outcomes. If we want to get the best out of our executives, the ideal amount to pay them is “enough to take money off the table”.

Anything extra might excite them, but not in a way that makes them better executives. Put simply, giving a CEO one, two or three million dollars might motivate them. But it doesn’t necessarily follow that they will work any harder if offered four, five or six million.

Research shows that when you have enough money, then you value the next dollar less, and may not work as hard for it.

That’s because they don’t really need the sixth million. It does not provide upside motivation, and could have the reverse effect. Research shows that when you have enough money, then you value the next dollar less, and may not work as hard for it.

There are other motivations that drive performance, such as the prestige of a particular company or job. Paying someone less may lead to better outcomes when they are motivated by these other factors.

In practice, if we want the best decision-making, this means we should pay executives enough so they feel rewarded for their efforts, but no more than others would take to do the same job, says associate professor Prabhu Sivabalan.

Hear more on what professor Prabhu Sivabalan has to say on decision-making, also what Game Theory has to say about the decisions that lie behind where businesses set up shop with academic Stephen Woodcock, in this edition of Business Briefing.