The use of robots and automation is growing but the UK lags behind other countries. What is needed is leadership to define a vision for manufacturing in the future, says Mike Wilson. 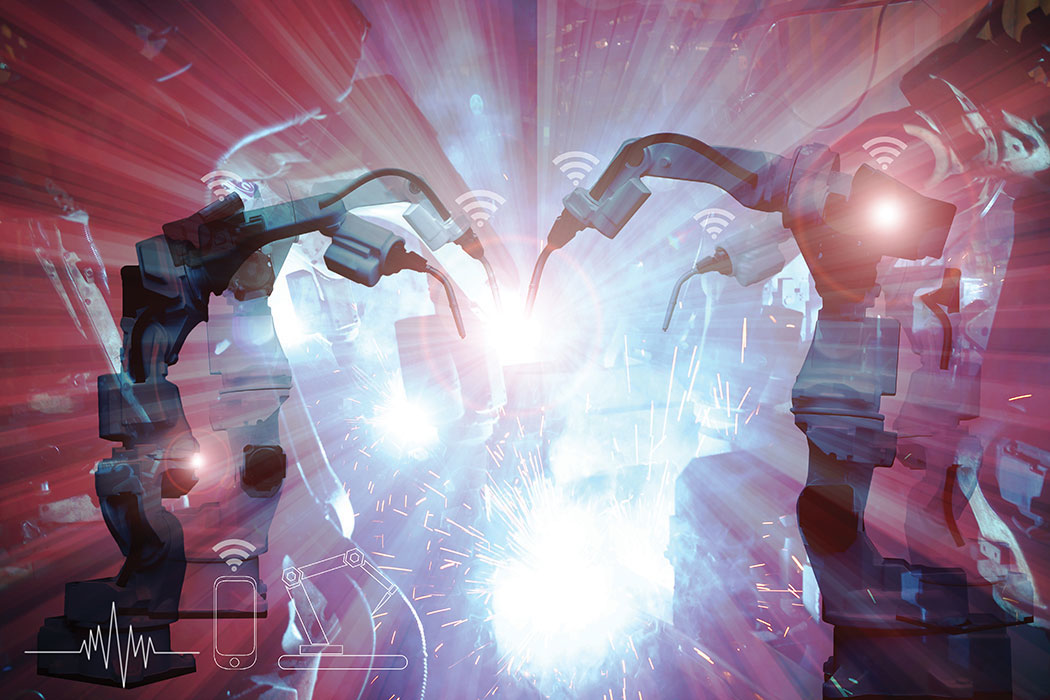 The first industrial robot was applied to a manufacturing operation in 1961 by General Motors. Since then the number of robots in use and the range of applications has grown almost every year, with the initial impetus provided by the automotive industry.

More recently, growth has accelerated, as a wide range of applications is being addressed across all industry sectors. We are fast approaching a point where the use of robots could make a step change, heralding a new era of robots and workers cooperating to achieve new levels of productivity.

The term “robot” originates from the play “Rossum’s Universal Robots”, written by the Czech playwright Karel Capek in 1920. It is derived from the Czech word “robota” meaning “slave labour”. The play portrayed robots as intelligent machines serving their human masters, but ultimately taking over the world.

Robots have continued to be portrayed in science fiction stories and films ever since, including Terminator and Star Wars. It is these high-profile images that have created the public perception of a robot as an intelligent, humanoid type of device that is often a threat rather than a benefit. The reality of current robot technologies is very different.

The robotics community categorises robots into two distinct application areas: service robots and industrial robots. Service robots are being developed for a very wide range of applications, including unmanned aircraft and submarines, machines for milking cows, search and rescue robots, robot vacuum cleaners and lawnmowers, and educational and toy robots.

Due to the wide range of applications and environments in which they operate, these machines vary greatly in terms of size, performance, technology and cost. They are very different from those used in the industrial sector but there is some crossover in terms of technologies. 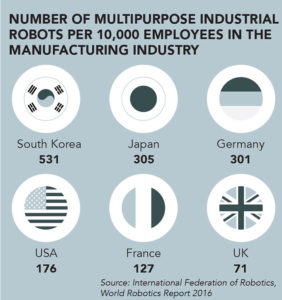 The development of Artificial Intelligence (AI) has also been closely linked with robots, particularly from the science fiction perspective. But the use of AI is much more widespread than purely robot applications, because AI can also be applied within any computer systems to enhance their decision-making capabilities.

AI capabilities are those that will ultimately produce the robots portrayed in science fiction, and it is from this technology that the potential dangers may arise. There is therefore serious consideration being given to ethical standards and possibly regulations to govern the development and introduction of AI technologies into society.

One of the challenges we face, particularly in relation to manufacturing, is the overlapping of these technologies and subsequent debate this generates. George Osborne, when he was chancellor of the exchequer, identified robotics as one the eight great technologies of the future. This at least raised the profile of robotics within government circles but unfortunately, investment was directed at service and advanced robotics, rather than industrial robotics.

A recent enquiry by the House of Commons science and technology committee investigating robotics and artificial intelligence did touch on industrial robots, but again was largely focused on advanced robotics and AI.

It is important that we do not allow concerns relating to the risks of AI technologies to delay the deployment of industrial robots. These robots are tools to assist people and most often used to perform dirty, dangerous and arduous tasks—tasks which should no longer be performed by people.

The industrial strategy green paper, published by the government in January, indicates a welcome change in the discussion regarding the productivity gap: “The UK makes less use of robotics and automation than most countries in Western Europe,” it says. 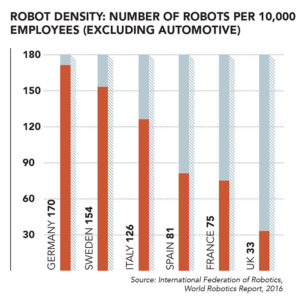 It is the challenge of the productivity gap with our main competitors that is causing the government to consider how this might be addressed. As the green paper indicates, “workers in France, Germany and the US produce on average as much in four days as UK workers do in five”.

One of the tools which can help is the greater use of industrial robots within our manufacturing facilities. Data published by the International Federation of Robotics (IFR) highlights the point. Outside the automotive industry, our robot density (number of robots per 10,000 employees) is 33 compared with 170 in Germany, 81 in Spain and 75 in France (International Federation of Robotics, World Robotics 2016).

China, previously seen as a low-cost labour country, is now installing more robots than any other country in the world. The UK is behind—and falling further behind. Unless we address this problem our businesses will struggle to remain competitive.

The debate regarding the development of these technologies has led to much speculation in the media that robots are a threat to jobs. Again the word “robot” is being used to encompass all related technologies, including AI. Even some academics have publicly stated that as much as 35% of the UK workforce is at risk of unemployment due to the growing use of robots.

However, a greater threat would be something equivalent to the demise, as we saw in the 1970s, of great swathes of British manufacturing because it was no longer competitive. A study in 2011 by the Copenhagen Business School (Automation, Labor Productivity and Employment – a Cross Country Comparison) concluded that if each industry sector in the UK was as automated as those that were the most automated, our productivity would improve by more than 22%. This would address our productivity gap. They also predicted that a short-term fall in employment would then lead to a growth of more than 7%.

There is perhaps a “once in a lifetime” opportunity for UK manufacturing to make a step change in productivity and competitiveness. The big challenge is not the technology. It is our willingness to grasp this opportunity.

A further study by the Boston Consulting Group (Sirkin, Zinser and Rose, September 2015) predicted that robotics would be the next great leap for manufacturing. As robot systems become more cost-effective (compared with human labour), technological advances remove barriers to adoption, and systems are developed which smaller manufacturers can afford and easily use; therefore, the share of tasks performed by robots will rise from a global average of around 10% today to about 25% by 2025. This will boost manufacturing productivity by up to 30%.

The rest of the world is following this trend and it is imperative, for the future success of our manufacturing industry, that we accelerate our activity—otherwise we risk being left behind. The technology advances that are driving this trend are not only the performance of the robots themselves, but also sensing technologies such as vision and force control that give robots the capability to accommodate variations in the environment and the products they are processing.

These advances are also complemented by advances in programming, simulation and human machine interfaces, making the robots much easier to use, operate and maintain.

The recent development of collaborative robots has also generated significant interest. These robots are safe to use alongside workers rather than be separated by guards. Collaborative robots can be easier to apply, provide greater flexibility and can often be installed for a lower overall cost.

However, it should be stressed that although the robot may be safe to operate without guards, the overall application must be assessed for risks and any hazards guarded.

Many UK businesses perceive robots as not appropriate for their needs as they require flexibility. They often believe they do not have the skills required to implement and run these machines and they think the costs are high.

These issues may have been true a few years ago but appropriate application of robots will provide flexibility; training will address the skills required; and the costs are now lower than ever.

There are good examples of UK businesses that have successfully installed robots. Companies such as CHX Plastics in Cornwall, which produces badges, pen toppers and fridge magnets, installed robots to automate the basic handling of operations, redeploying staff to higher value-added tasks, increasing output and providing the opportunity to compete successfully with lower-cost producers from Asia.

There are many further examples, ranging from small niche companies such as Boomf, which produces personalised confectionery; to safety equipment manufacturer, JSP. Both these businesses have seen more than threefold increases in productivity from their investment in automation and, most importantly, no reduction in employment.

Leadership is required to define a vision of how manufacturing will look in five or ten years’ time, to take the steps required to develop an automation strategy, and to encompass all the activities required.

This would include the implementation of appropriate training; a commitment to staff that the objective is to become more competitive and grow, not reduce employment; and the development of long-term partnerships with automation suppliers who can work with the business to implement the solutions required.

It is often better to look to automate simple applications as a first step, even if the anticipated return on investment is not as good as other applications. This provides the opportunity to move carefully up the learning curve, using experience from the automation supplier, so that the more difficult applications can be addressed when the skills within the business are ready for the more complex projects.

There is perhaps a “once in a lifetime” opportunity for UK manufacturing to make a step change in productivity and competitiveness. The big challenge is not the technology. It is our willingness to grasp this opportunity.

If we work together, we can achieve success and drive our manufacturing forward for the benefit of us all.

Mike Wilson is general industry sales manager at ABB Robotics and chairman of the British Automation and Robot Association.