Investor body believes stewardship will go through a “comprehensive review” in 2017. 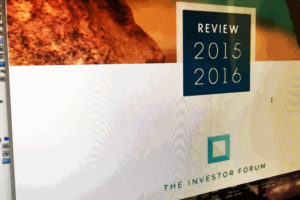 Scrutiny: stewardship is in the spotlight, says review

Stewardship by investors will be under intense scrutiny in 2017, according to the executive director of one of the UK’s most influential body of asset owners.

Andy Griffith, executive director of the Investor Forum, whose members manage £12trn in assets, gave his prediction in the body’s annual review.

He said business stewardship had moved up the agenda in 2016 and “societal scrutiny of the investment industry has rarely been more intense”.

The Investor Forum focuses its work in what it describes as the “relatively small number”—15 to 20 companies in the FTSE 350—where standard shareholder engagement has failed and “escalation” is required to resolve an issue between boards and shareholders.

The annual report revealed that the Investor Forum spent considerable time last year in talks with Rolls-Royce, the engineering company, over its strategic direction follow a profit warning.

According to the Forum’s report, the engagement did not involve Rolls-Royce’s involvement in a bribery and corruption scandal revealed this week, when the company announced it would pay £671m to settle cases with regulators and enforcement agencies in the UK, US and Brazil.

However, a report in The Times suggests the Forum is ready to intervene if its members raise complaints.

Investor Forum members proposed 16 companies for engagement in 2015–16. Of those, 14 were in the UK. Causes for engagement chiefly involve concerns about strategy and capital allocation, leadership and succession, operational performance and management information, reporting and communication.

The report also reveals that the Forum engaged with Sports Direct, which made headlines throughout the year for its approach to governance.

The report concludes that governance failings contributed to a 54% drop in Sports Direct’s share price at a time when the market rose by 7%.

“The call for an independent review was driven by a desire to give Sports Direct the opportunity to gain a ‘clean bill of health’ that would help the chairman to meet his objective of adding non-executive directors to strengthen the board and build a team of executives to support the entrepreneurial flair of Mike Ashley,” said the report.