Blackrock is the world’s largest asset manager, so when it speaks, boards listen. Michelle Edkins, the company’s head of global investment stewardship, swears by the importance of good board composition and diversity. 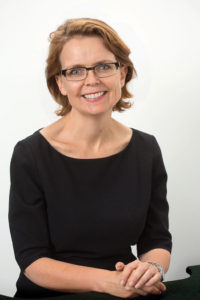 There is a sense in which the main concern for Michelle Edkins, global head of investment stewardship at Blackrock, is not so much about the performance of the companies, but about the people who lead them.

Ask Edkins about Blackrock’s core area of worry and the answer inevitably comes back to the personalities occupying seats around the boardroom table.

“The key is who gets on the boards, really,” she says. “And once they are on the board, how do we as investors assess how well the board is performing?”

And what’s important about the people? That they know what they are talking about and are tuned in. More importantly, they have the character to act when problems inevitably rear up.

“They are not only engaged and well informed, but when something needs to be done, they do it. They won’t all look the other way and hope that someone else will do the tough thing,” Edkins says.

A force to be reckoned with

Blackrock has around $4.4tn (almost 8% of global assets) under management, making it a leviathan among investors and a force to be reckoned with once it starts paying close attention to the way companies are run. Browse through the financial pages any day of the week and there are almost certainly references to the firm in relation to subjects as diverse as global advertising companies, exchange traded funds, commercial property or the UK’s economy post-Brexit. Blackrock is influential enough to be considered on a vast range of business subjects and cited widely.

Edkins herself has been quoted frequently in the press, delivering views on everything from activist investors to boardroom diversity in publications like the The Wall Street Journal, Forbes magazine and the Financial Times. She has a voice, and with 20 years’ experience and the backing of an institution the scale of Blackrock, observers of governance and corporate strategy take note.

Being a non-executive is a demanding role that is time-consuming and requires preparation and research.

For many, investors like Blackrock and Edkins only appear to become publicly involved with companies when something seems to be going off the rails. So, when asked to identify the common governance problems she sees, Edkins once again focuses on people and directors, those “who are not fit for purpose”.

But she does so while explaining that a significant change has taken place in the modern non-executive director’s role. It’s professionalised, she says, which means those who see it as a “retirement post” and are “not actually committed” are beginning to look like remnants from a distant corporate past. Being a non-executive is a demanding role that is time-consuming and requires preparation and research. Some people don’t necessarily appreciate the modern nature of the role when they accept a post, says Edkins.

“PwC did some interesting research for US boards,” Edkins says. “It says that that over a third of the current board members in their survey believe there’s someone on their board who should be asked to retire.”

That’s a startling figure and one chosen to illustrate a point about individuals being prepared to take the role of the non-executive seriously. That said, Edkins is quick to point out its other implications.

“That’s both interesting and scary in the sense of: why don’t they act, if they think that? And secondly, what does that say about the board as a self-regulating entity?”

Board evaluations must be combined with analysis that specifically asks if the right people are in place on the board for the strategy being pursued.

The question is slightly rhetorical, but one of the answers, says Edkins, is that “sophisticated board evaluations” should become a “normalised and annual process”. However, she stresses that board evaluations do not work in isolation. They must be combined with a forward-looking analysis that specifically asks if the right people are in place on the board for the strategy being pursued.

Board composition needs to be balanced, according to Edkins, who stresses that not everyone needs to be an expert in the same subject. “The critical thing is that in the round, there are all the right skills.”

The one thing she worries about is a preoccupation with the independence of non-executives. Not that it isn’t important, she is quick to emphasise. But a focus on independence among non-executives risks creating a trade-off in some sectors with industry expertise. “The question is, have we got the balance right?” she asks.

One area where Edkins believes the balance is wrong at the moment is boardroom diversity. She emphasises its critical nature because, as she puts it, diverse boards take better decisions.

“When you think that a board is a decision-making body, you want them to be taking the best decisions possible. And homogenous groups don’t take good decisions,” says Edkins.

Recent statistics reveal that the US is behind on introducing diversity to the boardroom. On average about 19% of board seats are held by women, lagging behind many European states where quotas and campaigns have brought a significant increase in the number of women on boards.

Indeed, many senior figures have been so exasperated by the slow progress they have been moved to complain openly, including Mary Jo White, head of the Securities and Exchange Commission—the US financial watchdog. At a recent conference White also made the argument that diversity is about making better business decisions. Edkins sees a distinct reason for the slow progress and the means of persuading boards to change.

“Too many people see [diversity] as a social issue; they talk about it being fair to have diversity rather than what the academic evidence shows…”

“Broadly speaking, the US has stagnated on board diversity…But it’s because too many people see it as a social issue; they talk about it being fair to have diversity rather than what the academic evidence shows—[that] it makes boards better,” says Edkins.

However, the question is not just about women. Edkins stresses that boardrooms should reflect the culture of its workforce.

“If every company says it is in a war for talent, [yet] your leadership is homogenous and your workforce and client base are not, you’re really going to struggle to attract the employees who will drive the future success of your company,” she says.

Even as she encourages more progressive thinking on boardroom composition, Edkins is also careful not to advocate radical or abrupt change. When reflecting on proposals to introduce employees to UK boards, she chooses to talk about the route to change.

“The change we prefer to see is evolutionary, not revolutionary,” she says. Edkins makes the case for practitioners to make changes through identifying “gaps” in governance in a way that wins the buy-in of other practitioners. The process might still involve a hotly contested debate, but the practitioners are involved and can feel part of the conclusion if it comes from within. Change imposed from the outside is inherently problematic, says Edkins.

“Human nature [dictates] that if you don’t buy into something, you go out of your way to make sure it doesn’t work, and that’s what happens with change imposed from the outside of the practitioner world,” she says, adding that practitioners acting on their own behalf usually bring about incremental change.

She adds: “Radical change often leads to a backlash or a counter-productive response.”

Blackrock, Board composition, board diversity, board effectiveness, finance, Michelle Edkins